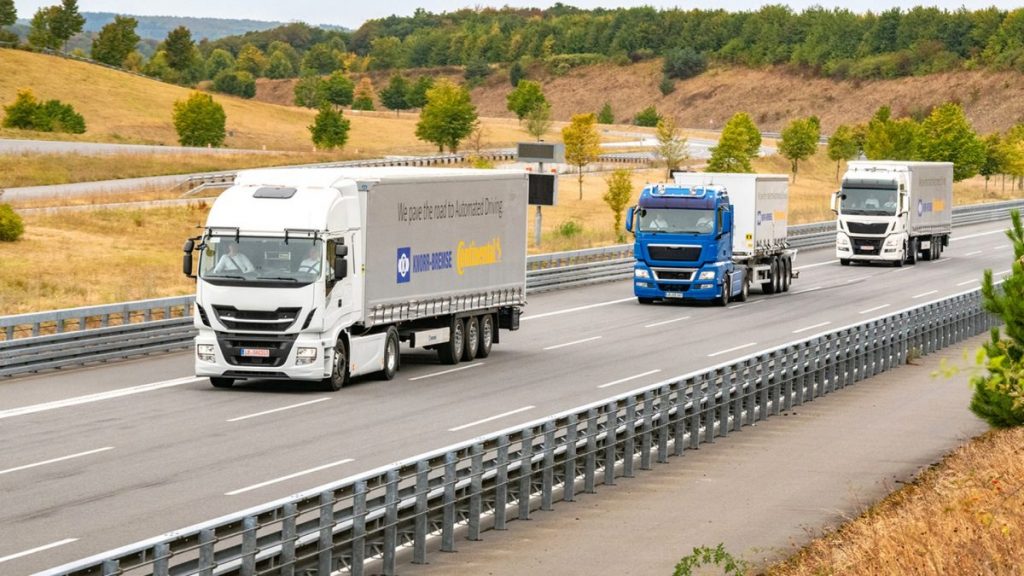 The industry’s Tier 1s are adapting to new demands around electrification and autonomous driving, which are set to shape the long-haul sector. By Freddie Holmes

Truck manufacturers have played a leading role in making the long-haul sector cleaner, safer and more productive. However, there is also a core chain of suppliers that has been working hard behind the scenes to turn innovative concepts into reality.

In order to navigate the impact of autonomous driving and electrification in the truck sector, suppliers are working more closely. Joint efforts help to share the load when it comes to R&D, and in the long run should reduce time to market.

Continental, for example, has been working with Knorr-Bremse since 2018 to accelerate efforts on highly automated commercial vehicle systems. The latter brings its expertise in braking and steering, while Conti provides sensors, central processing units and develops the human-machine interface (HMI). Peter Laier, Chairman of Knorr-Bremse, recently told Automotive World how the company is repositioning to support the next generation of autonomous truck developers.

Partnerships have also been forged directly with automakers, bringing them closer together than a conventional supply contract might. Bosch has worked closely with Nikola, in which it holds a minor stake, and in April 2021 formed a joint venture with Chinese commercial vehicle (CV) manufacturer Qingling Motors to co-develop fuel cell systems. “We are now literally picking up speed in the industrialisation of the fuel cell,” said Bosch board member Stefan Hartung at the time.

In some cases, strategic partnerships have not been enough, with full mergers taking place to bring new expertise and scale. Perhaps the most significant deal for the truck sector in recent years was ZF’s blockbuster US$7bn acquisition of Wabco in 2019. It has already proved fruitful, positioning ZF as a major (CV) supplier of everything from stability control and electronic steering to advanced driver assistance systems (ADAS). ZF’s OnGuardMAX, for example, combines camera and radar sensors and allows the truck to react to possible collisions with other road users or pedestrians.

For AEB to work, the truck needs powerful and reliable braking systems at a mechanical level. A spokesperson from ZF flagged the supplier’s latest solutions, which also help to solve the challenge of bringing more than 33,000lb of metal to a stop. These include new air disc brakes—delivered to first customers from January 2021—and a new brake actuator platform that launched in May. Research from Bosch in 2018 found that as much as 34% of all collisions caused by heavy trucks could be avoided by using AEB.

But a Class 8 tractor is not only difficult to stop, it is also hard to manoeuvre. ZF aims to provide smoother, more precise steering through its ReAx electric steering unit, which the supplier says can reduce driver fatigue over longer distances. New electronic steering systems will also prove important as autonomous trucks approach commercialisation for obvious reasons. The ReAx system will underpin Locomation’s Level 4 autonomous driving system, which is planned to enter customer trials in late 2022.

From top to tail

Long-haul trucking is all about carrying as much cargo as possible—without exceeding weight limits—to reduce the total number of trucks and trips needed to get goods from A to B. As such, long-haul trucks typically have long trailers. In the US, these are typically around 53 feet (16.5 metres) in length. In some regions such as Australia and South Africa, super-long trailers are permitted, which can be up to 50 metres. With increasing pressure on truckmakers to curb vehicle emissions and improve safety, recent innovations have been made to improve braking and reduce aerodynamic drag.

Schmitz Cargobull, for instance, has been working on the EcoDuo system, which pairs two trailers together for extra hauling capacity. While such a combination is permitted only in Scandinavia currently, it has been trialled in Spain and the Netherlands with an eye to rolling out in other markets. “The EcoDuo system consists of two standard curtainsider semi-trailers connected via a dolly trailer and coupled to a tractor unit,” a spokesperson explained. “With the EcoDuo concept, Schmitz Cargobull is advocating the Europe-wide introduction of a transport concept that reduces CO2 emissions… and can be ideally used in the long-haul sector.”

Innovations in seating will not capture the headlines, but they are having a tangible impact on long-haul drivers today

At the same time, there is more to a truck than just the underlying mechanical systems. Inside the cabin, advances have been made to ensure drivers are safer and more comfortable over long distances. As the industry tussles with a continued driver shortage, anything that makes the cab more pleasant could prove game-changing. Some suppliers have put forward visions of digital screens sweeping across the dashboard to place information in clear view of drivers, reducing the time that is spent looking away from the road. Meanwhile human-machine interface (HMI) specialist Preh has been working on new dashboard controls including capacitive touchpads, gesture recognition and haptic feedback, which could have a similar effect by avoiding the need to hunt for particular dials or switches.

Studies have also shown that a comfy seat can have a significant impact on driver satisfaction. With hour upon hour behind the wheel, even small vibrations can lead to discomfort. Clear Motion, which in 2017 acquired Bose Corporation’s Active Motion Control division, has a specially-designed seat system that adjusts to road disturbances in real time, reducing driver fatigue. The Active Suspension Seat is marketed under the banner: “Give yourself a break without taking one.” National Seating, a subsidiary of Tier 1 supplier Commercial Vehicle Group, also emphasises the importance of dedicated CV seats with its mantra: “Tough jobs need tougher seats.”

Innovations in seating will not capture the headlines, nor will they have a significant role to play in autonomous trucks. However, they are having a tangible impact on long-haul drivers today and for the foreseeable future.

On paper, the evolving demands of truckmakers is nothing new. Suppliers have always been hard pushed to bring the latest innovations to the table, not only at pace but also in a way that is affordable and sustainable. But with the next generation of automated and electric technologies requiring a complete overhaul of the vehicle, there is some newfound leeway.

Electric powertrains—be they fuel cell or battery electric—represent drastic shifts for powertrain suppliers, which have grown their business around the internal combustion engine for decades. Safety specialists have also built up their expertise in electrically-assisted steering and braking systems, but must now consider how these will operate as part of fully autonomous driving systems in coming years.

The truck sector’s major Tier 1s have helped to expand the functionality of modern trucks, but advances have not come easy. With new partnerships in tow and long-term investments in place, suppliers will continue to tackle the evolving trends being realised in the long-haul space.

Q3 US sales of electrified vehicles surged past 1m units