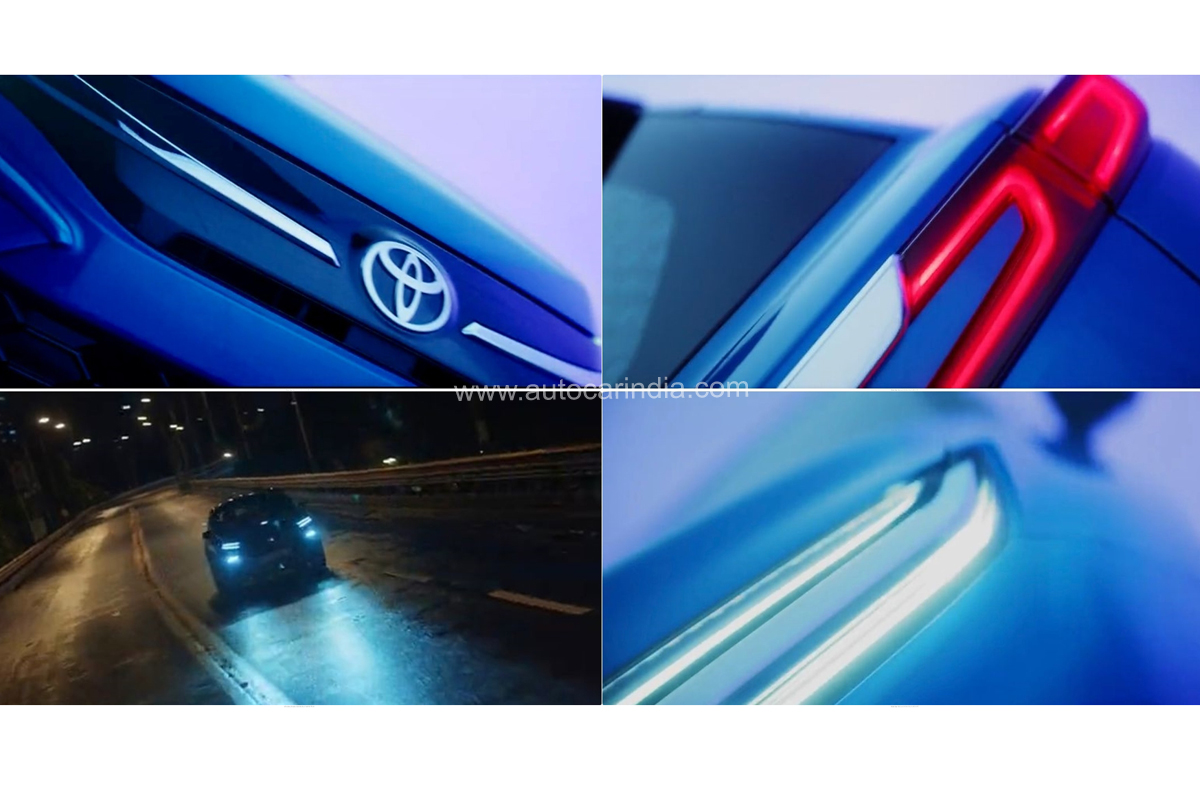 Expected to go on sale by August, the Toyota Hyryder will come with a mild hybrid as well as a strong hybrid powertrain.

Ahead of its global debut on July 1, 2022, Toyota India has released the first teaser video of its upcoming Urban Cruiser Hyryder. This midsize SUV will be an all-new four-metre-plus vehicle and will sit above the current sub-four-metre Urban Cruiser SUV. Dealer sources tell us that bookings for the Toyota Urban Cruiser Hyryder could start sometime next month.

A prominent “Hybrid” badge is positioned just below the wing mirror confirm that the model will come with a full-hybrid powertrain option. The front bumper seems to have aggressive styling with a tall air dam surrounded by large full LED headlamps.

The SUV seems to be finished in Toyota’s “Nebula Blue” paint shade also seen on other SUVs by the brand abroad, like the Corolla Cross. The Urban Cruiser Hyryder SUV shown in the teaser video has a floating roof and blackened A-pillars. The video also confirms presence of 360-degree camera, atleast for the higher variants.

The rear styling is partially shown too – stylish C-shaped tail-lamps extend on to the upright-looking tailgate with dual C-Shaped LED parking lamps. A prominent chrome strip is positioned at the centre housing the Toyota logo neatly merging with the tail-lamps.

As far as engines and powertrain options go, the Toyota has confirmed the Urban Cruiser Hyryder will come equipped with mild-hybrid tech supplied by Maruti Suzuki and full-hybrid system from Toyota. We can confirm that it will come with a 1.5-litre K15C engine that will be mated to either of these hybrid systems, depending on the variant.

The SUV will also have a Maruti version and both vehicles will be built at Toyota’s Bidadi plant number 2 in Karnataka. Production for both SUVs will start in August. The Toyota Urban Cruiser Hyryder is expected to go on sale first, followed by the Maruti version which will be sold via the brand’s Nexa outlets.

What are your thoughts on the styling of Toyota’s upcoming Creta rival? Let us know in the comments below.