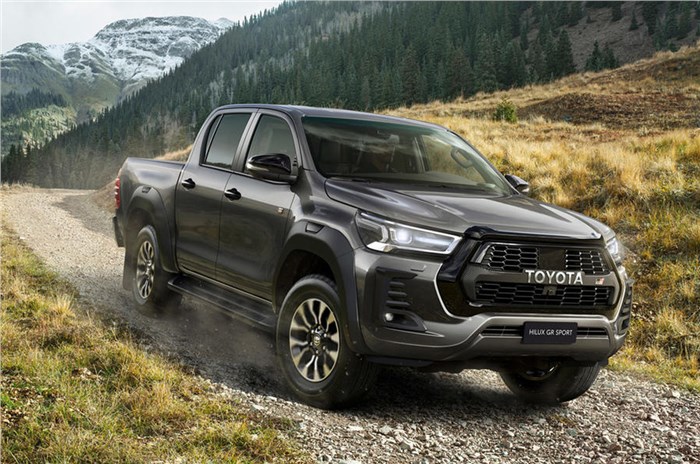 The Hilux GR Sport is inspired by Toyota’s success at Dakar Rally.

Listen to this Article

Ahead of the Hilux’s market launch in India on January 20, Toyota has revealed the Hilux GR Sport for international markets, a new flagship trim for the popular pickup truck inspired by the firm’s success in the Dakar Rally. An exterior visual overhaul and GR-themed interior upgrades help the GR Sport stand out from the regular Toyota Hilux, while a retuned suspension system promises improved handling over the standard truck.

Do note that the exterior/interior cosmetic updates and engine options on the European-spec Hilux GR Sport are substantially different from the Japan-only GR Sport variant that was introduced last year.

In a nod to the successful fourth generation Hilux of the early 1980s, GR Sport models feature the TOYOTA name across the front grille in place of the current brand emblem. The front bumper also looks a lot sportier, thanks to larger side air intakes, gloss black surround around the grille and a body-coloured skid plate.

The truck rides on 17-inch alloy wheels shod with all-terrain tyres. Additionally, the wing mirrors, side steps, tailgate handle and the flared wheel arches have been meted out a gloss black treatment. It also gets GR Sport badges on the grille and on the tailgate.

On the inside, the biggest highlight is a new carbon fibre-like trim with a bright red accent running across the width of the dashboard. A similar trim is also used on the doors, adding a dose of sportiness to the cabin. Further, GR-branded sports seats, carpet mats, steering wheel and starter button, along with red contrast stitching, help differentiate the model from other Hilux trims. Aluminium pedals and steering wheel-mounted shift paddles are also included as standard.

The Hilux GR Sport models will be exclusively powered by the 2.8-litre, four-cylinder diesel engine also found elsewhere in the Hilux line-up, producing 204hp and 500Nm of torque. It is paired to a six-speed automatic gearbox and sends power to both axles. In contrast, the Japan-spec Hilux GR Sport was powered by Toyota’s smaller 2.4-litre diesel engine.

“The Toyota Hilux has a legendary reputation for toughness and reliability,” Toyota Gazoo Racing driver Nasser Al-Attiyah said. “This new model, which was inspired by our iconic Dakar race cars, brings new levels of driving experience both on-road and when going off-road. It truly encapsulates the spirit of our race cars, bringing a part of Dakar to buyers all over the world.”

And while the Hilux may be an extremely popular pickup truck in markets like Europe, South America, Australia and Japan, it is only now that Toyota is bringing it to India. The Hilux is slated for a launch in India on January 20 and pre-bookings for the truck are already underway at Toyota dealerships.

The Hilux shares its IMV-2 platform with the Fortuner and the Innova Crysta, both of which are produced here in India. It will also share its 2.8-litre diesel engine with the Fortuner, possibly in the same 204hp, 500Nm tune as found in the Fortuner. The Hilux will be sold in a single, four-door pickup body style and the deliveries are slated to begin from March this year.

The Hilux will go up against the Isuzu V-Cross, which is currently the only lifestyle pickup on sale in the country. The Hilux is expected to be priced around the Rs 30 lakh mark (ex-showroom).

What are your thoughts on the Toyota Hilux GR Sport? Let us know in the comments below.

Toyota displaces General Motors as US’ bestselling manufacturer in 2021