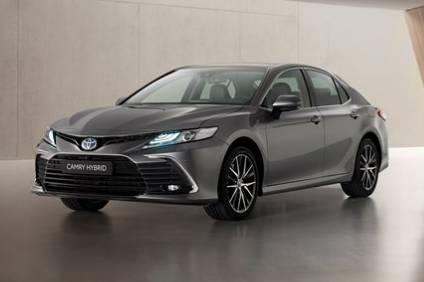 Toyota has announced an updated version of its Camry hybrid for Europe.

Among the upgrades is a new 9in infotainment touchscreen, featuring faster software and screen response, and smartphone integration with Apple Carplay and Android Auto.

The hybrid-only Camry is also gaining new safety systems, including lane trace assist, which helps to keep the car centred in its lane, and intelligent adaptive cruise control, which automatically brings the car’s speed within the limit denoted by road signs.

Also new are emergency steering assist, and intersection turn assist, with the latter recognising oncoming traffic or pedestrians crossing the road in the path of the car as it turns at a junction.

The Camry Hybrid is a product of the Toyota New Global Architecture (TNGA) design and engineering philosophy.

Several new features have been added to the Pre-Collision System (PCS). They include daytime front-to-front oncoming vehicle detection; Emergency Steering Assist (ESA) and Intersection Turn Assistance. Intersection Turn Assistance provides a warning and automatic braking if the driver turns left or right in front of an oncoming vehicle in the opposite lane, or a pedestrian crossing the road from the opposite direction after the turning.

Another system, Lane Trace Assist (LTA) helps to keep you on track and centred in the lane and if it judges that there is a risk of the vehicle’s deviating from its lane, it will apply force to the steering in order to assist the driver in avoiding lane departure. Improvements to the LTA system include more precise lane detection, a faster reactivation time after a lane change; an increased counter steer angle to contrast air turbulence when overtaking big trucks and give more straight line stability; earlier notice of a curve radius ahead to acute for the system to cope with; and increased steering wheel force in order to keep LTA active at higher vehicle speeds.

Sales of the 2020 Camry Hybrid will begin throughout Western Europe this autumn.

Interesting BMW X5 Prototype Spied: Facelift Or Something Else?