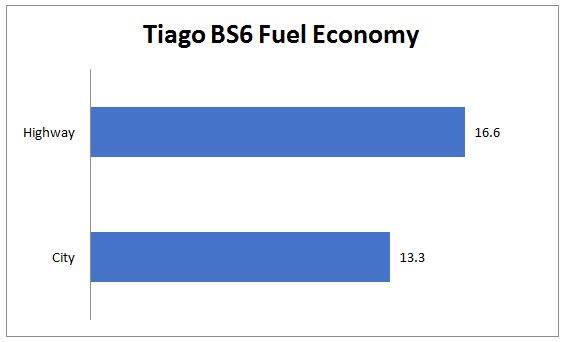 Based on our real-world tests, here’s a look at the Tiago petrol manual’s fuel economy figures.

Tata launched the Tiago hatchback in 2016 with petrol and diesel engines, paired with manual and AMT gearbox options. However, with the shift to BS6 in 2020, Tata dropped the diesel engine. The hatchback has sold over 4,00,000 units since launch, which speaks volumes of people’s confidence in the car, helped further by its 4-star GNCAP rating. We tell you how far a litre of fuel takes you in the BS6 petrol-manual Tiago.

What is the real-world fuel economy of the Tata Tiago manual?

The BS6 Tiago’s 1.2-litre petrol engine puts out 86hp, which is 1hp more than the BS4 version, but is down on torque by 1Nm, at 113Nm. There is no Eco or City drive mode like in the BS4 version either.

The fuel economy figure in the city is respectable; but the highway figure does seem a bit low. This is mainly because the hatchback sits close to 3,000rpm in fifth gear, while cruising at 100kph on the highway.

What’s interesting is the Tiago’s torque band – it pulls without any issues right from 50kph in fifth gear. This is bad for fuel economy, but lets you drive without downshifting on the highway.

Before our real-world fuel economy test, we fill the tanks of our test cars till the brim and maintain tyre pressures based on the manufacturer’s recommendation. These cars are driven in fixed city and highway loops and we maintain certain average speeds. To keep a check on any untoward variation, we always have a reference car driving along – one that we’ve already tested in the past. Periodic driver swaps further neutralise variations in driver patterns. At the end of each cycle, we calculate economy by tanking them up till the brim. Throughout our test, there is only one person in each car, running the air-con and other electrical like the audio system, indicators and wipers when required, just like how a regular user would. We take pride in our testing data which isn’t merely consistent, but also gives users an accurate indication of what they can expect in the real world.

What are your thoughts on the Tata Tiago BS6 petrol’s fuel economy. Let us know in the comments below.