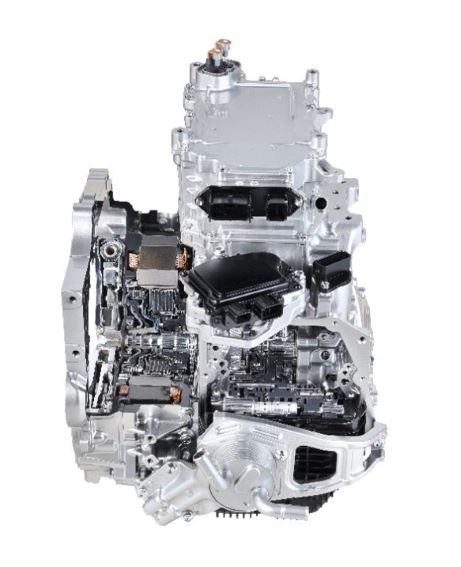 BluE Nexus Corporation, Asisin and Denso announced that they had jointly developed a new one-motor hybrid transmission for Toyota’s new Crown Crossover RS, which will goes on sale in autumn 2022.

The transmission integrates newly designed Direct Shift-6AT with a driving motor and an inverter and, the suppliers claimed, is “characterised by high acceleration performance and contributes to increasing fuel efficiency”.

“In combination with the eAxle mounted at the rear of the vehicle, the [transmission] achieves driving performance suitable for a premium vehicle by taking full advantage of the 2.4-litre turbo engine, contributing to enhancing the attractiveness of Toyota’s new Crown,” they added in a statement.

The clutches for starting the vehicle moving forward and disengaging the engine are subject to coordinated control so that the engine can be started and stopped smoothly and quietly when switching to an from electric drive mode.

The driving motor was “significantly” downsized by reducing stator shaft length achieved by newly developed production technology, including the coil expansion assembly, as well as by cooling of the coil and optimisation of the magnet layout.

The large diameter flat motor has enabled the placement of two clutches inside the motor rotor, making it possible to avpid an increase in the overall length of the powertrain. Under bonnet packaging was improved by using an ‘electromechanical integration structure’ in which an inverter is mounted directly above the transmission.