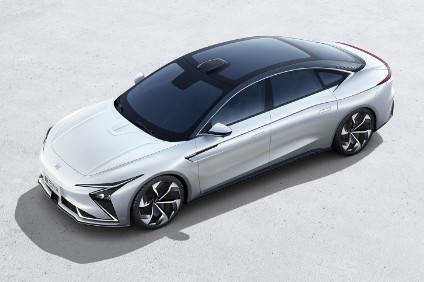 SAIC’s plan to join forces with ‘etail’ giant Alibaba to launch a new premium EV brand, IM (or “intelligence in motion”), reported earlier Thursday on just-auto, was confirmed late in the day by chip supplier Nvidia.

The first two vehicles in the range – a flagship sedan and SUV – will have autonomous parking and other automated driving features, as well as a 93kWh battery, as standard with 115kWh optional.

SAIC will begin taking orders for the sedan at the Shanghai Auto Show next April, with the SUV following in 2022.

These models will have multi Nvidia Orin SoCs (system-on-a-chip) at the core of a central computer system plus cabin personalisation continuously upgradable over-the-air (OTA).

“By centralising and unifying the compute architecture, [the] vehicles will be able to receive advanced software features as they’re developed,” Nvidia said in a blog post.

The supplier claimed Orin as the “world’s highest-performance, most-advanced AV and robotics processor. This supercomputer on a chip is capable of delivering up to 254 trillion operations per second (TOPS) to handle the large number of applications and deep neural networks that run simultaneously in autonomous vehicles and robots, while meeting systematic safety standards such as ISO 26262 ASIL-D”.

IM cars will have two of the SoCs and the compute platforms will be able to deliver more than 500 TOPS of performance to achieve the redundancy and diversity necessary for autonomous operation.

The new intelligent vehicles will be supported by a large team of AI and software engineers, dedicated to improving the performance and capability of the car as technology advances, Nvidia added.

IM will include smartphone features that can be personalised for driver and passengers, creating a smart living space inside the car.

Driving in Europe after Brexit: what are the new rules?