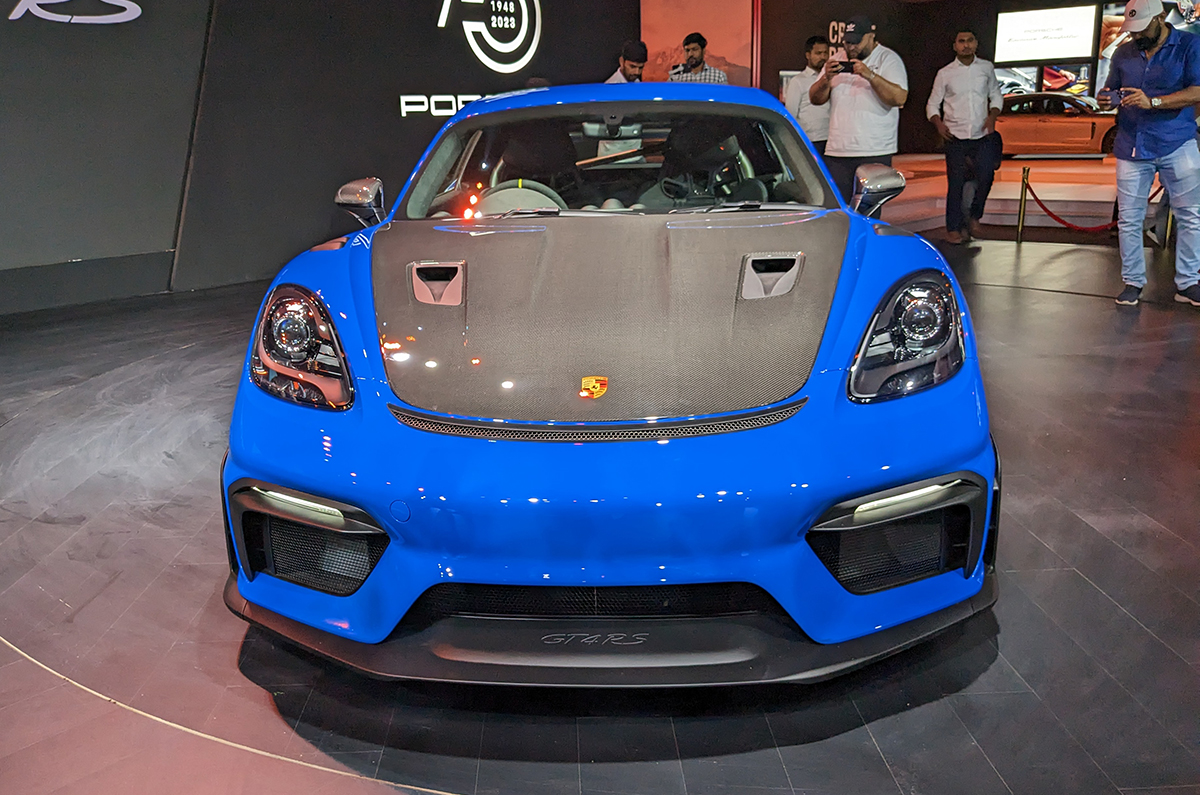 Also on display at the Festival of Dreams was the Porsche Taycan from our epic Kashmir to Kanyakumari road trip.

Porsche launched the 718 Cayman GT4 RS in May 2022 for Rs 2.54 crore (ex-showroom, India) and has now showcased the hardcore sportscar at its Festival of Dreams event in Mumbai.

The range-topping version of the 718 line-up, the GT4 RS is only available in the coupe body style. In India, the 718 range starts with the standard Cayman and Boxster, followed by slightly more spruced-up GTS versions of both. And sitting below GT4 RS are the performance-oriented Cayman GT4 and Boxster Spyder.

The GT4 RS is the most hardcore, track-oriented, performance model Porsche has ever created for the 718 line-up. At the Nurburgring racetrack in Germany, it managed to put down a time of 7:09.03, a good 23.06 seconds faster than the GT4.

This staggering laptime at the Nurburgring is due to the GT4 RS being slightly lighter but also substantially more powerful than the GT4. Under the hood, it has a 4.0-litre naturally aspirated flat-six engine that produces 500hp – 80hp more than the GT4 – and revs to 9,000rpm. It also makes 30Nm of torque more than the GT4, at 450Nm. This powerplant is the same that’s found in its elder sibling, the 911 GT3, but a bit tuned down.

All this power helps the GT4 RS do the 0-100kph sprint in just 3.4sec and go on to a top speed of 315kph. While the GT4 can also be had with a 6-speed manual gearbox, the GT4 RS is only available with the 7-speed dual-clutch automatic gearbox. The weight saving – of up to 35kg compared to the GT4 – is due to the extensive use of carbon-fibre reinforced plastic for the bonnet and front wings. Its use of a lightweight rear windscreen helps too.

Porsche’s motorsport division in Flacht, Germany, leaves no stone unturned when it comes to the RS models. Much like the 911 GT3 RS, the GT4 RS has a plethora of aerodynamic upgrades that also play a key role in making it fast around a racetrack.

It gets a swan-necked rear wing, new air vents and an adjustable front diffuser. The GT4 RS also sits 30mm lower than the standard Cayman. According to Porsche, all of this has resulted in the GT4 RS having 10 percent more downforce compared to the GT4, and it goes up to 60 percent in the track-oriented performance mode. The rear quarter glass has also been scooped out to enhance airflow to the engine, and Porsche says this improves the soundtrack as well.

At Porsche’s Festival of Dreams, the 718 GT4 RS was the showstopper. Alongside, the German carmaker also showcased the Porsche Taycan that we at Autocar India used for our epic road trip from Kashmir to Kanyakumari. You can also watch the whole trip here.

Porsche 718, 911 and Taycan range get new variants in India