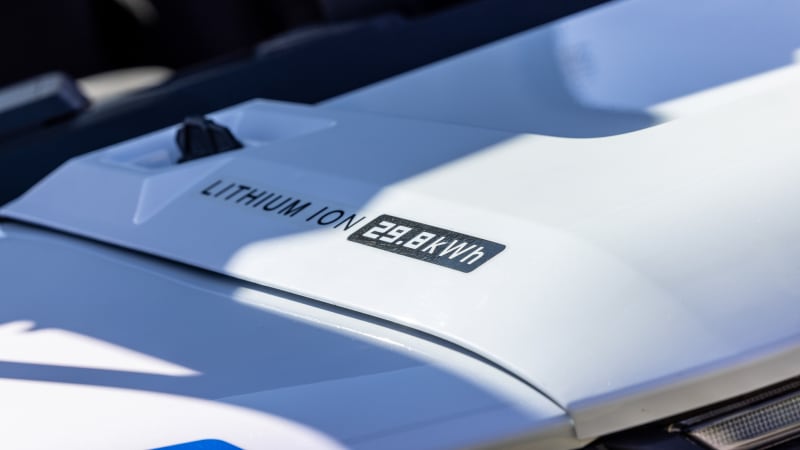 There are lots of reasons why electrification is all the rage in the automotive industry. Reduced emissions and dependence on oil are certainly high on the list, but so are performance and quietness. It’s for those reasons that the new Polaris Ranger Kinetic XP may be appealing to a wide-ranging swath of utility vehicle buyers. It’s fully electric, using technology developed with Zero Motorcycles in California, and, as we found after taking the machine out for several laps of a makeshift off-road course at increasingly high speeds, it’s also quiet, durable and highly capable.

It’s hard to say what will be the biggest draw for potential Polaris Ranger Kinetic buyers, but we’re going to guess the two biggest deciders will be performance and silence. Starting with the former, a swift kick of the accelerator pedal unleashes 110 horsepower and an impressive 140 pound-feet of torque and proves the Zero-sourced motor, controller and battery setup was a smart inclusion. As is the case with most electric drivetrains, the permanent-magnet AC motor delivers instant power from zero rpm, and the rush of electron-fueled acceleration comes on strong before tailing off right around the time most prudent pilots would probably be concerned that they are riding in a comparatively small and open vehicle with a short wheelbase and narrow track. Put simply, this thing feels almost too quick and powerful in its sportiest and fastest settings, which is exactly as it should be.

And then there’s the distinct lack of racket. Having driven and ridden in dozens of side-by-side utility vehicles, usually there’s a lot of shouting and hand signals between riders and passengers at speed. In the Ranger Kinetic, however, occupants can carry out regular conversations at normal decibel levels. From the outside, too, the Ranger Kinetic makes some noise over rutted and rocky pavement as bushings move, rocks ding and mud flies, but at more sedate speeds there’s nary a sound to be heard. For would-be buyers looking for a hunting rig, the Kinetic makes a lot of sense. 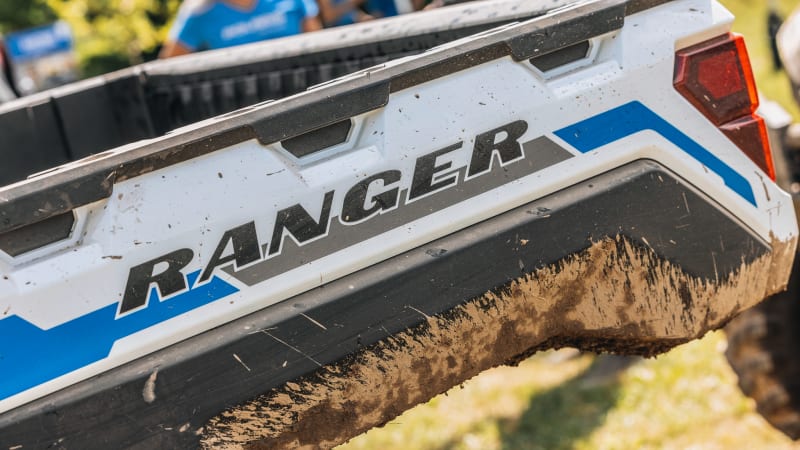 The Ranger XP Kinetic offers multiple drive modes that include a Standard option along with Sport and Eco+. Standard is, as its name implies, considered the normal mode to which most operators will default, and it offers some regenerative braking to help keep the battery charged. Eco+ piles on more regen and mutes throttle impulses as you’d expect. Sport amps up the throttle response and turns regen off entirely. We spent a lot of time in Sport as we flew through the forest, but missed the off-throttle regenerative brakes enough that we ended up back in Normal mode by the end of the day. Either way, the Kinetic felt like it responded about the same at full throttle, getting up toward its 60-ish-mph top speed in what feels like just a few hundred yards.

The Ranger XP Kinetic boasts 14 inches of ground clearance — that’s more than a Jeep Wrangler Rubicon or Ford Bronco Raptor — and has 10 inches of suspension travel front and rear. Its 3-foot by 3.5-foot rear tilting cargo box is 12.5 inches deep, and Polaris says it can haul up to 1,500 pounds in the bed. A 2-inch hitch receiver is rated to tow up to 2,500 pounds.

A large shifter to the right of the small-diameter steering wheel offers high, low, neutral and park options, and a switch toggles between forward and reverse. The driver’s seat slides forward and back, and there’s enough room for two occupants of normal adult size along with a third smaller perch in between. A 7-inch screen offers all kinds of useful information and media possibilities. The Ranger XP Kinetic also debuts Polaris’ new Ride Command+ technology package, which integrates with a smartphone app to display vehicle information like miles driven and battery status, vehicle diagnostics and repair schedules, a remote vehicle locator so you’ll remember where you parked (or track the vehicle if it’s stolen) and a remote monitoring function that’s useful when preparing for trips.

Two versions of the Polaris Ranger XP Kinetic are offered. In Premium trim for $24,999, an air-cooled 14.9-kilowatt-hour lithium-ion battery pack provides an estimated range of up to 45 miles. That range is calculated at a constant 25 miles per hour and with 250 pounds of cargo. It’s a fair bet that 45 miles of range will be plenty for a lot of buyers. Actual mileage will, as always, depend on the way it’s driven and what accessories (more on those later) are in use, but consider that the Ranger XP Kinetic uses almost zero power while it’s “idling,” and that many prospective buyers will be thinking more in terms of hours of use rather than miles of use. 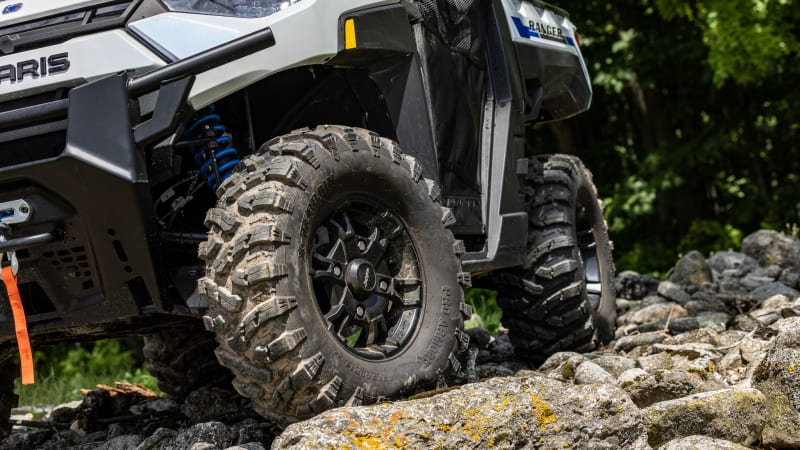 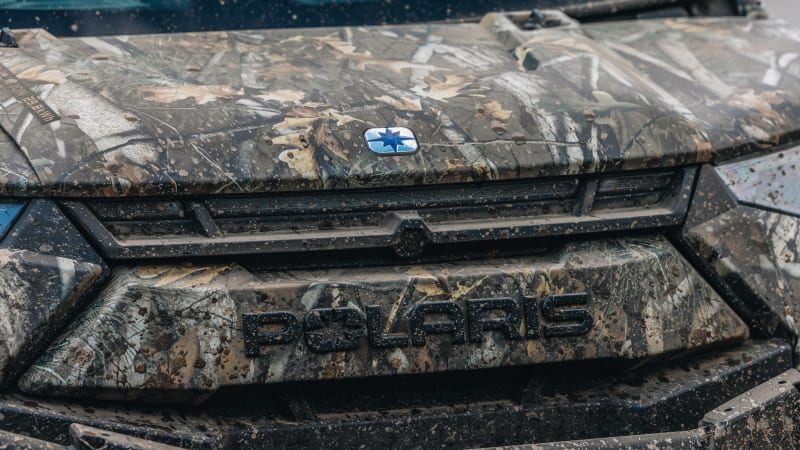 The Kinetic XP Ranger Ultimate costs $29,999 and carries a second 14.9-kWh battery onboard for a total of 29.8 kWh of capacity. Double the batteries, double(ish) the range. Polaris estimates a total of up to 80 miles for its slightly heavier offering. There’s no discernible change in performance between the two models, though we’d have to imagine the lighter single-battery version may be a tick quicker to its top speed than the heaver double-battery version.

The XP Kinetic’s onboard charger (3-kW for the Premium and 6-kW for the Ultimate) and included cable allow owners to charge with a regular outlet for overnight charging, or through a 240-volt outlet that can charge the Ranger XP Kinetic in around 5 hours. An accessory charger is available that can cut charging time by 50%.

Polaris says 95% of the accessories it offers for the gas-powered Ranger lineup are compatible with the XP Kinetic. Snow plows, winches, heaters and auxiliary lighting options are all available straight from the manufacturer. A 12-volt connector is located in the cargo bed, but there is no provision to power anything using a standard 110-volt outlet. 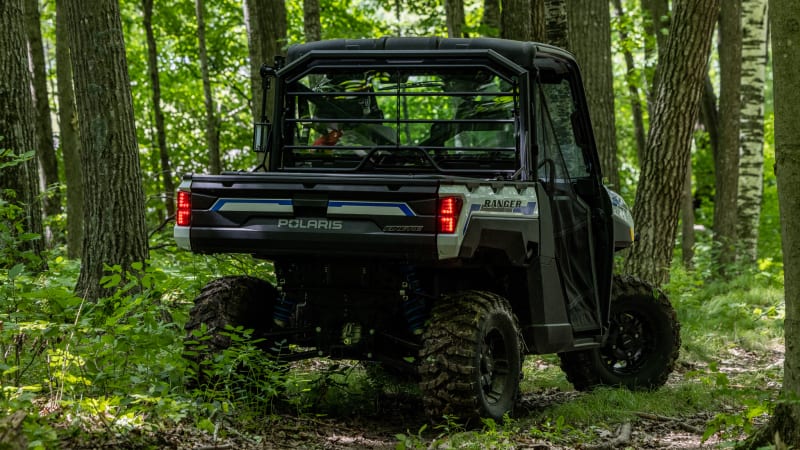 Polaris expects scheduled maintenance costs for its EV to be reduced by 70% versus comparable gas models. Remember, there are no oil changes or filters to change, no spark plugs or clutch maintenance. The company backs the Ranger XP Kinetic with a 1-year full factory warranty, but bumps the powertrain to 3 years and the battery to 5 years.

Swinging back around to the price, buyers will surely notice that the XP Kinetic Premium is nearly $5,000 more expensive than the gas-fueled Ranger XP 1000. Potential operators will have to do some math in their heads if cost is the deciding factor between going with gas or electricity. As for us, we think that’s a reasonable sum considering that the Kinetic is quicker, faster, stronger, quieter, less expensive to operate and maintain, and in general just plain more capable and fun than its less expensive sibling. This is a utility vehicle that deserves serious consideration for hardcore users who aren’t afraid to dip a toe into the electrified waters. Figuratively speaking, of course.

New Zontes engine will have a redline of over 13,000rpm