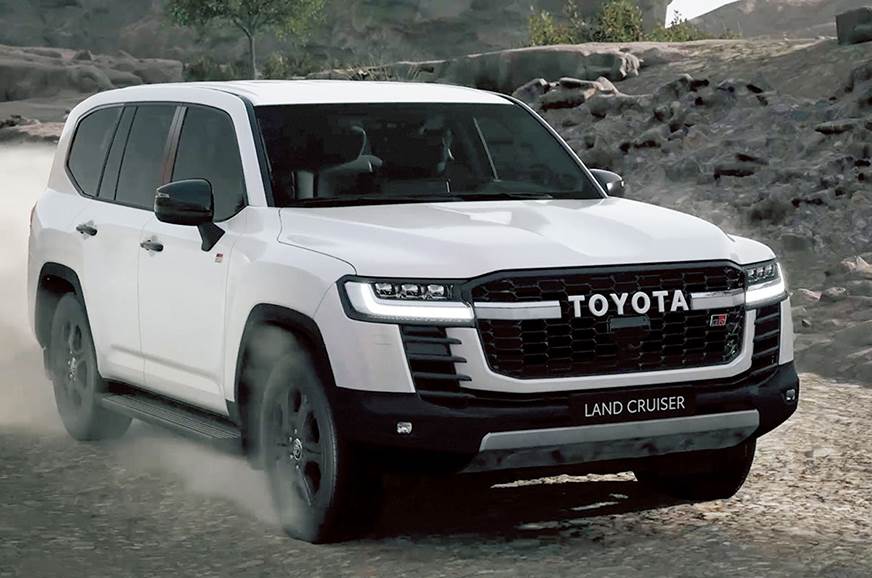 The Toyota Land Cruiser LC300 has been officially revealed, after a series of online leaks. The new LC300 is the first all-new Land Cruiser in almost 14 years, making it one of the longest gaps between two generations of this SUV. It also gets a GR Sport version, as well as a 70th anniversary edition, in some markets.

The new Land Cruiser sees a complete redesign but doesn’t stray far off from the outgoing LC200. Notable changes include new-design headlamps, a more prominent grille, a secondary U-shaped vent running along the edge of the grille, and fog lamps set low on the bumper. The sides are characterised by flared, squared-off wheel arches and a window line with notable kinks near the A- and D-pillars. The rear is quite plain in comparison.

The redesigned new Land Cruiser LC300 is the successor to the 200 Series that debuted in 2007. Toyota has adopted the new GA-F platform that’s based on TNGA, while keeping the frame structure, which is the foundation that protects the Land Cruiser’s USP. Furthermore, the new Land Cruiser has improvements such as vehicle weight reduction, lowering the centre of gravity, the adoption of a new powertrain, along with new interior and exterior designs.

The LC300 gets a slew of new engine and powertrain options, depending on the market. Engine choices for the new Land Cruiser start with a new 3.5-litre, twin-turbo V6 petrol that makes 409hp and 650Nm of torque. This engine is mated to a 10-speed automatic gearbox and, according to Toyota, does 0-100kph in 6.7sec. This unit replaces the 5.7-litre V8 that was available in the previous-gen SUV.  Additionally, there will also be a 3.3-litre twin-turbo diesel that’s good for 305hp and 700Nm of torque.

The new LC300 has the same approach angle of 32 degrees as the outgoing LC200. The departure angle depends on the variant and can reach 26.5 degrees, while ground clearance measures 230mm. As always, the new LC300 comes with 4WD as standard and also gets three differential locks.

The new-gen SUV gets a completely overhauled interior, starting with a standard 9.0-inch infotainment screen or an even larger 12.3-inch optional setup. The features list now includes  Apple CarPlay and Android Auto integration, wireless smartphone charging, a 360-degree camera, and a head-up display. On the higher variants, a powered tailgate will also be available, along with an electrically adjustable steering wheel, air ioniser, and even a fingerprint authentication system.

Toyota Land Cruiser LC300 GR Sport: what is it?

A fresh addition to the already-new Land Cruiser LC300 range is the new mid-range GR Sport variant. It features slightly different styling, smaller alloy wheels with taller profile tyres. While more details are yet to be revealed, sources tell us that the Land Cruiser LC300 GR Sport will come with an off-road-focused suspension setup, allowing for better wheel articulation.

Toyota Land Cruiser LC300: will it come to India?

Toyota was selling the previous-gen Land Cruiser, the LC200, in India until the introduction of BS6 emission norms. We expect the new Land Cruiser to return to India sometime in future. As far as off-roaders go, Toyota currently sells the Fortuner in India and will introduce the Hilux pickup in our market sometime this year.