New cars, SUVs to have six-airbags standard from October 1, 2023 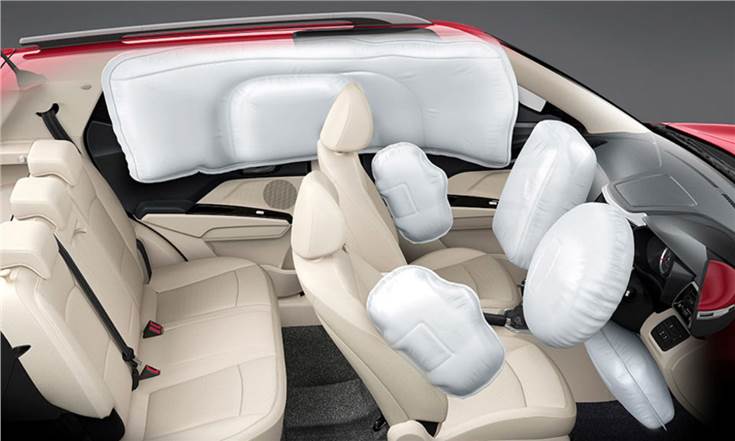 Union Minister for Road Transport and Highways Nitin Gadkari has confirmed that the mandatory six-airbag rule for all new cars will go into effect from October 1, 2023 – deferred by one year. The rule will apply to all new cars and SUVs that come under M1 category of vehicles in India.

Earlier in January this year, the ministry had approved a draft notification making six airbags mandatory in cars with passenger capacity of eight people. The rule was to go into effect on October 1, 2022.

Taking to Twitter, Gadkari said, “Considering the global supply chain constraints being faced by the auto industry and its impact on the macroeconomic scenario, it has been decided to implement the proposal mandating a minimum of 6 Airbags in Passenger Cars (M-1 Category) w.e.f 01st October 2023.”

“Safety of all passengers travelling in motor vehicles irrespective of their cost and variants is the foremost priority,” he added.

Industry sources have revealed that there simply isn’t enough airbag manufacturing capacity in India, which is the prime reason behind the expected delay. Airbag production would have to be nearly tripled to 18 million units a year to meet the surge in demand if all cars were to be compulsorily equipped with six airbags.

In India, a driver airbag was made mandatory in all cars from July 2019, while dual front airbags became compulsory from January 1, 2022. The first draft notification for the same was rolled out in December 2020, while the proposed deadline was of April 1, 2021 for new models, extending to June 1, 2021, for all other existing models. However, after subsequent deadline extensions, dual airbags in cars eventually became mandatory only at the start of this calendar year.

It is learnt that more than the airbag cost, which is understood to make carmakers incur an additional expense of around Rs 7,500 per car for adding side and curtain airbags, the cost of model redevelopment as well as lack of adequate lead time to undertake such mega reengineering projects are other big concerns. Many entry-level models in India from Maruti, Hyundai, Tata and Renault would need to be re-engineered for this application.

While the total cost of a six-airbag system is estimated to range between Rs 12,500 and Rs 15,000 for OEMs, the effective price inflates by two to three times by the time the car reaches a customer’s home, due to levy of various central and state taxes, including road tax.

Do we really need six airbags in all cars?

The recent road accident that claimed the life of former Tata Group chairperson Cyrus Mistry is a clear example that more than airbags, it’s the seatbelt – part of a vehicle’s primary restraint system – that ends up saving lives in the event of a crash. This only highlights the need for all occupants to wear a seat belt, and, for that matter, even heavy cargo secured well, and that a simple rear seat belt reminder would go a long way towards instilling this habit, something we, at Autocar India, have been pointing out for a while now.

An airbag, on the other hand, forms the vehicle’s supplementary restraint system (SRS) and essentially assists an occupant’s seatbelt to help cushion the adverse impact of an accident from being transmitted to the human body. The efficacy of an airbag is only achieved when the occupants are securely strapped in their seats.