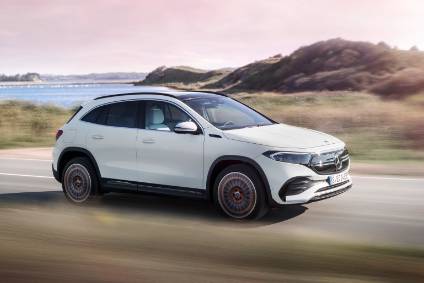 Mercedes-Benz has unveiled the EQA, the new entry-level model for its pure electric EQ car range.

The EQA is a compact SUV, based on a platform, MFA 2, shared with the GLA.

The SUV-styled model is launching with a 190hp electric motor, and a 66.5kWh battery pack, allowing a claimed range of 265 miles on the WLTP cycle.

Further powertrain options will subsequently join the range, offering either an increased power output or an extended range, as well as all-wheel drive – the launch model, badged 250, is front-wheel drive.

Among the technology on offer with the car will be navigation with ‘electric intelligence’, which calculates routes while taking battery range into account, allowing time for charging stops, as well as considering other factors such as the weather. Mercedes says it is also able to react dynamically to real-time changes, for instance in the traffic situation or personal driving style.

The EQA is made at the Rastatt plant in Germany (originally it was slated for Hambach, but that plant is to be sold to INEOS, to make its Grenadier 4×4).