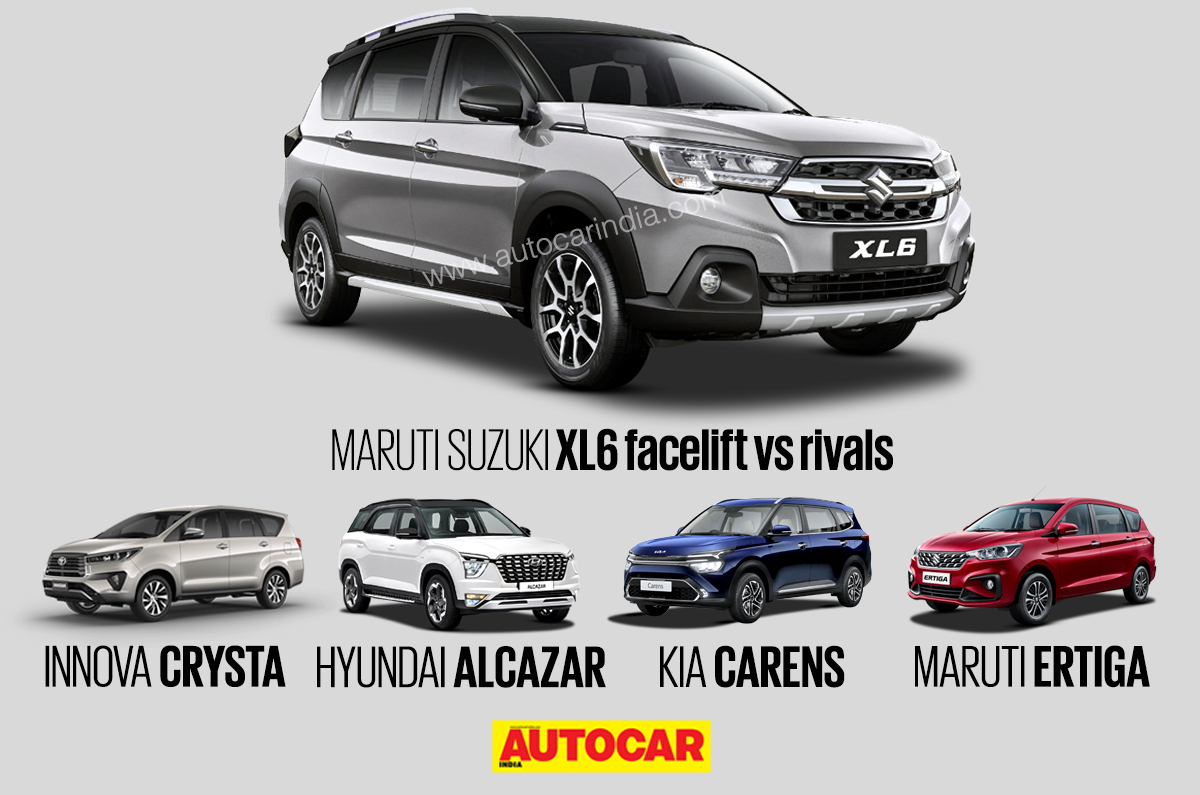 Maruti has launched the XL6 in three trim levels and has priced it from Rs 11.29 lakh to Rs 14.55 lakh (ex-showroom, Delhi). Compared to its rivals, the XL6 is significantly more affordable than the Alcazar and Innova Crysta as both their starting prices are higher than even the XL6’s top-spec version. However, the Ertiga and Carens both have a lower starting price than the XL6. The Ertiga is comfortably the most affordable option here and, interestingly, the XL6’s range starts where the Ertiga’s ends. Though the Carens is cheaper at the lower end, it is much more expensive than the XL6 at the top-end. This is down to the Carens having a turbo-petrol engine option and a sophisticated dual-clutch auto gearbox option, both of which aren’t offered on any of the others. Overall, the XL6’s  prices come across as being quite competitive.

In terms of dimensions, the XL6 facelift remains identical to its predecessor. It measures 4,445mm in length, 1,775mm in width, 1,700mm in height, with a 2,740mm long wheelbase and 180mm of ground clearance. When compared to the Ertiga, the XL6 is longer, wider and taller, but the two models have the same wheelbase, ground clearance and tyre size (15 inches).

Perhaps the biggest change on the XL6 is the inclusion of a new 1.5-litre DualJet petrol engine with start-stop technology, which made its debut on the refreshed Ertiga earlier this month. This engine uses two injectors per cylinder, giving it greater control over fuel injection, and, as a result, greater efficiency. It puts out 103hp at 6,000rpm and 136.8Nm at 4,400rpm, which is 2hp and 1.2Nm down on the outgoing 1.5 engine.

Gearbox options for the updated XL6 include a 5-speed manual and a new 6-speed torque-converter automatic with paddle shifters, which replaces the ageing 4-speed unit of the outgoing model. The XL6 facelift is claimed to do XXkpl with the manual gearbox and XXkpl with the auto.

The Carens comes with two petrol options, both of which have been borrowed from the Seltos SUV. First is the 115hp, 144Nm, 1.5-litre naturally aspirated unit that’s paired to a 6-speed manual gearbox only. The Carens has the distinction of being the only one to offer a turbo-petrol option here – the 140hp, 1.4-litre direct-injection unit. The Carens’ turbo-petrol can be had with either a 6-speed manual or a 7-speed dual-clutch automatic gearbox.

As for the rivals, the Innova Crysta has the largest displacement engine, which is also the most powerful and torquey (166hp, 245Nm). The Toyota’s petrol engine can be had with either a 5-speed manual or a 6-speed torque converter automatic. The Alcazar is not far behind the Innova Crysta, with its 159hp, 191Nm, 2.0-litre petrol unit. Gearbox options for the Alcazar petrol include a 6-speed MT and a 6-speed torque converter AT.

It’s also worth noting that the Carens, Alcazar and Innova Crysta come with diesel engine options, while the Ertiga gets a CNG option.

So that’s how the updated Maruti XL6 stacks up against its rivals on the spec sheet. But should it be the MPV you opt for? We can only answer that once we’ve compared them in the real world, so stay tuned.

All prices are ex-showroom, Delhi

One in five two-wheelers sold by FY23 will be an EV: Ather CEO