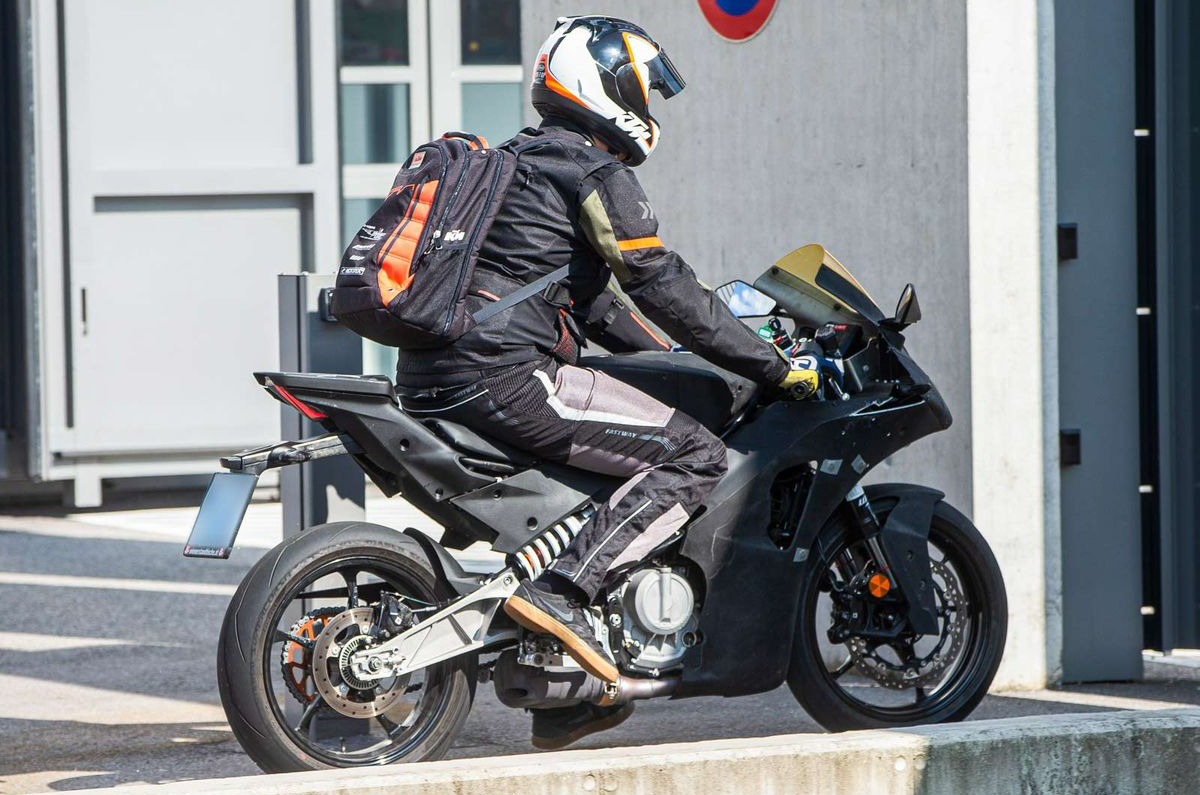 The next-gen RC 390 will likely revert to an underbelly exhaust, like the pre-2017 bike.

KTM took the wraps off a significantly overhauled RC lineup just a few months ago but these spy shots indicate that the Austrian bikemaker is already readying a next-gen RC lineup.

The next crop of small-displacement RCs seem to be drawing design inspiration from the recently-spied twin-cylinder RC 990. Gone is the layered fairing design and insect-like headlamp unit, replaced by a more conventional single-layer fairing and a slot-like headlight unit.

This update will not be restricted just to the cosmetic side of things and there will likely be significant mechanical changes as well, visible in the form of a ‘gullwing’ swingarm, side-mounted monoshock and a redesigned engine casing. The design of the engine casing seen here appears to be similar to the recently spotted next-gen KTM 390 Adventure, although it isn’t identical, indicating that KTM is still fettling with the engine internals. There have been rumours of the 373cc mill growing to a 399cc unit and this will especially benefit the RC 390, which is raced in the lightweight category in the WSBK SSP300 class as well as the MotoAmerica championship.

Mechanical changes are also reflected in the underbelly exhaust collector box, as opposed to the side-slung muffler on the current RC 390. The bikes spied here are rolling on super sticky Pirelli Supercorsa SP tires, a feature that’s likely not going to be carried over to the production-spec bike. The wheels seen here appear to be the same units as the current-gen RCs. What can also be seen here is that the braking hardware has been moved to the right, instead of on the left as on the current model.

The next-gen RC 390 will be based on the third-gen 390 platform that will debut later this year. Traditionally the RC follows the Duke a year later, but given that the heavily updated RC 390 only broke cover last year and the ADV has been out since late 2019, it could be possible that the next gen ADV will go on sale after the Duke, especially since spy shots of that have been doing the rounds for a while now while this is the first glimpse of the new RC.

Market adoption of ‘driver out’ truck tech is still far away