Is This Mysterious 2022 Subaru BRZ The Long-Awaited STI Version? 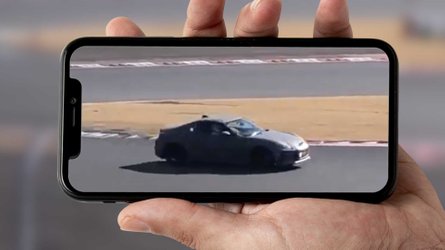 Subaru has never offered a full-blown STI version of its BRZ sports car. The Japanese automaker has come close, offering the STI-tuned BRZ tS, though it only received upgraded looks. However, there’s a new-generation BRZ coming, and rumors are again circulating that Subaru could offer a BRZ STI variant this time around. Adding fuel to the fire is a new video that shows a camouflaged next-gen BRZ with a few new performance bits.

Video taken at Fuji Speedway shows a mysterious camouflaged BRZ drifting at the track. The video is short, failing to provide many details about the car. However, the Twitter account that posted the video also captured photos of one test vehicle wearing a unique lower front spoiler with winglets on the bumper’s outer edges. It’s the only indication that this BRZ is different.

This is far from corroboration that this is an STI version. There’s a good chance Subaru could be letting its STI team tune the new model as it did for the BRZ tS. The automaker hasn’t provided any indication if it plans to offer a higher-performance version of the sports car. The new BRZ will remain naturally aspirated, sporting a 2.4-liter four-cylinder that produces 228 horsepower (170 kilowatts) and 184 pound-feet (249 Newton-meters) of torque. That’s a gain of 11  and 15 percent, respectively, over the outgoing car’s 2.0-liter mill.

The extra oomph will help the car overcome the car’s slight increase in curb weight. It should still hit 60 miles per hour (96 kilometers per hour) in about 5.7 seconds, which is quick enough; however, there’s plenty of room for an STI version sporting a turbocharged version of the car’s mill, which already exists in the Ascent SUV. It makes 260 hp (194 kW) and 277 lb-ft (360 Nm) of torque. That amount of power would certainly help kick out its rear end.