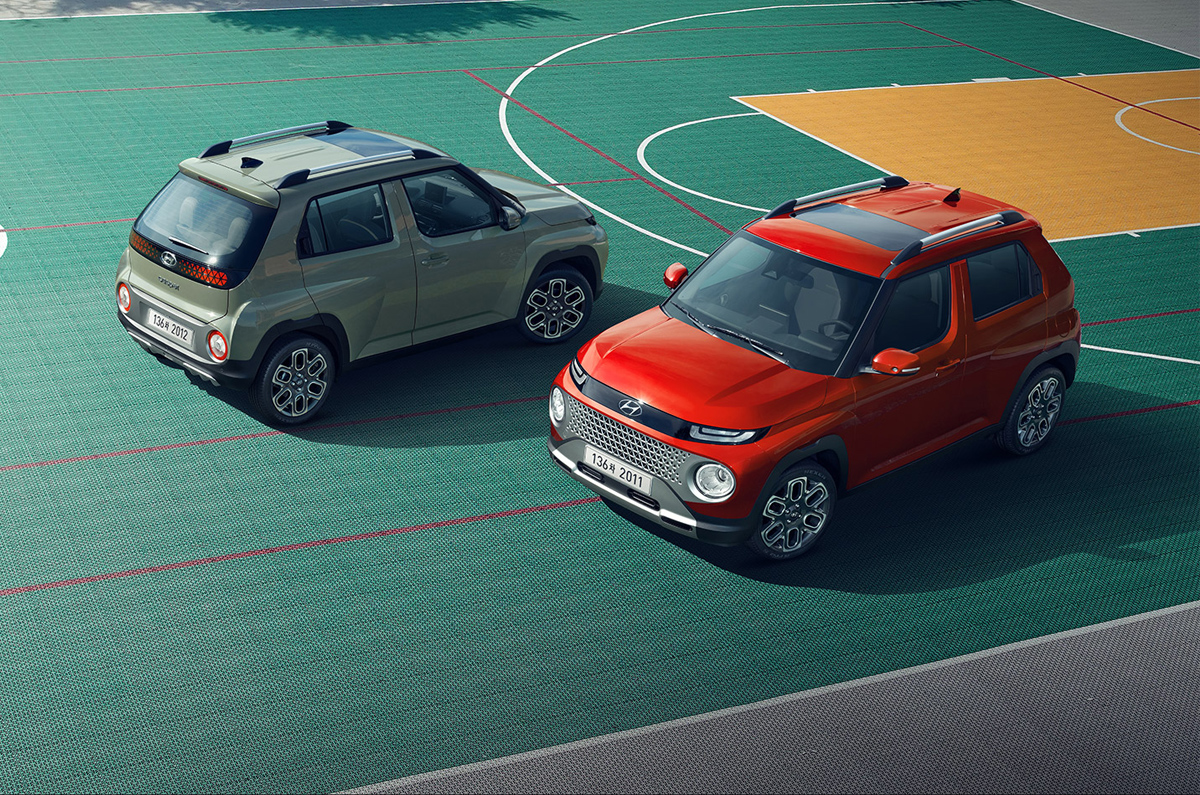 0
Share
Ahead of its debut in South Korea later this month, Hyundai has officially released the first images of the upcoming Casper micro-SUV, revealing the production-spec exterior design. The Hyundai Casper will be smallest SUV in the brand’s global portfolio. The Casper will first go on sale in Korea, and is then expected to make it to India by early 2022. We are told that the Casper SUV could get a different market name when it comes to India sometime next year.

Quirky is the word that best describes the Hyundai Casper’s design. Characterized by an upright and very boxy silhouette, the Casper has very unique design details. Like most new Hyundai SUVs, the face gets a split LED headlamp setup with the LED DRLs positioned on top, in a gloss black panel along with the brand logo. Meanwhile, the mail circular headlamps with LED rings are positioned in the bumper.

What’s really unique about the face are the triangular motifs on the silver grille. In fact, there seems to be two different versions of the grille, the other finished in gloss black with circular design motifs that mimic the headlamps. It also gets a faux silver skid plate and a flat bonnet. In typical SUV fashion, there’s generous body cladding all around.

In profile, you’ll notice the Casper’s heavily flared and squared-off wheel arches. The window line is particularly unique with different shapes for the front and rear windows. The A-pillar has been blacked-out, while the B-pillar is finished in body colour. Meanwhile, the rear door handles are neatly integrated in the C-pillar. The Casper also gets roof rails and stylish dual-tone alloy wheels.

At the back, the tail gate gets a dual-tone look with the upper half finished in gloss black, also featuring triangular LED light motifs. The circular tail lamps are positioned in the bumper below, matching the positioning of the headlamps. The rear bumper also gets a faux silver skid plate.

Hyundai hasn’t revealed images of the Casper’s interior yet. However, previous spy shots suggest that the Casper will come with white upholstery for the interior. The dashboard will be characterized by a free-standing touchscreen infotainment system. In typical Hyundai fashion, you can expect the interior to be loaded with features, including connected car tech.

Under the hood, as we had reported previously, the Casper will get a 1.0-litre naturally aspirated and a 1.0-litre turbo-petrol engine in Korea. The naturally aspirated unit will produce 76hp, while the 1.0-litre TGDI turbo-petrol engine will produce 100hp and is the same unit that’s offered with the Venue in India. Both engines will come mated to a 4-speed automatic gearbox.
That said, it remains to be seen what engine options Hyundai will offer with the Casper in India. While the 1.0-litre turbo-petrol unit could be reserved for higher variants, to keep costs down, Hyundai might offer the Nios’ 1.2-litre four-cylinder engine or even the Santro’s 1.1-litre four-cylinder motor.

As mentioned, the Casper will first go on sale in South Korea this year. Following that, it is expected to make it to India sometime early next year. In India, the Casper directly rival the upcoming Tata Punch and will also go up against high-riding hatchbacks like the Maruti Suzuki Ignis and even entry-level compact SUVs like the Nissan Magnite and the Renault Kiger.