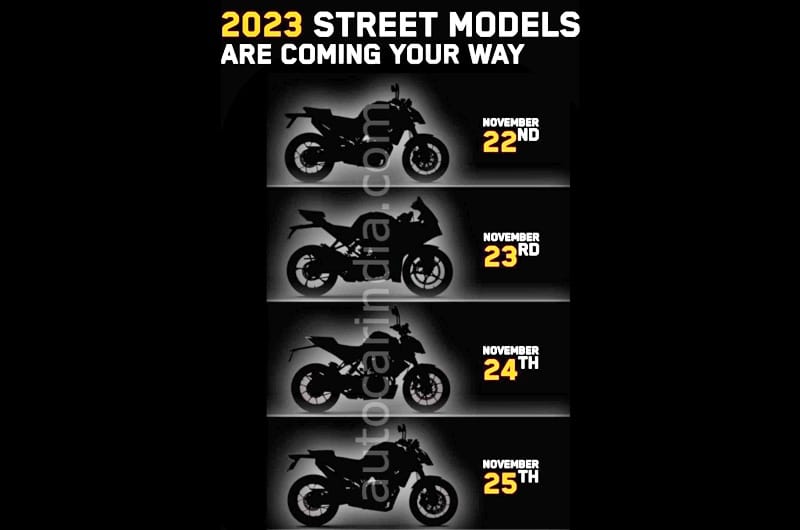 Among these four new bikes, there appear to be one new small-displacement model each for the RC and Duke lineups.

KTM has teased the arrival of four new bikes in time for the 2023 launch season on its social media handle. While the bikes are mostly obscured from view, the silhouettes help us decipher that there’s one new small-capacity Duke and RC model in the pipeline. Here are a few possibilities for what KTM could be teasing.

Seeing as how all the silhouettes in this teaser look extremely similar to current KTM models, there is a possibility that KTM could just be giving these models new colour schemes for the 2023 model year. But if the company has more comprehensive updates planned, here’s what they might be:

KTM has teased one new lower-displacement model each for the RC and the Duke lineup, respectively. The small-capacity RC could be one of two things, either KTM is globally launching the GP Edition of the RC that debuted recently in India, or it could be the RC 250, which would complete the trifecta of the 250cc mill spawning Duke, Adventure and RC models.

When it comes to the Duke, it seems it will be either the 250 or the 390 Duke because of the presence of a side-slung exhaust muffler. Once again, these could receive new colour options, or perhaps more intensive updates. If there are mechanical updates here, expect them to be on the milder side, because of the imminent arrival of the all-new, next-generation KTM Dukes, which we spied testing recently in India.

KTM has also teased the arrival of two new middleweight naked bikes based on the 790/890 Duke platform. The revival of the 790 Duke to sit alongside the 890 Duke was a bit of a surprise move from KTM, and it will be interesting to see what the next step is for this lineup.

Of these four new bikes, only the small-capacity models are likely to make their way here.

Mazda to harness partnerships to boost EV investment by £9bn