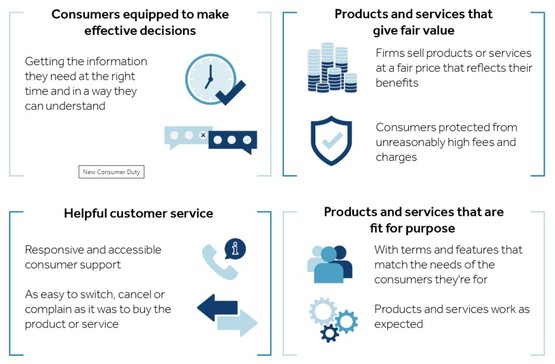 The Financial Conduct Authority has issued focus points for regulated firms after its review of a sample found some are well behind in their planning with just six months until Consumer Duty rules comes into effect.

Of the implementation plans that the FCA has already studied since firms’ October 31 2022 deadline for submission passed, some are well behind in their planning and the finance and insurance regulator fears there is a risk that these may struggle to comply with the duty from its launch on July 31 2023.

Its concerns include firms that gave little detail on who was leading the implementation plan, and examples where the board agreed the plan without discussion or challenge, or the risks of implementation work slipping had not been assessed and little thought given to mitigation strategies.

The FCA said that nevetheless many other firms’ implementation plans show they understand the shift to the Consumer Duty and have set up extensive work programmes to ensure they will comply with it properly.

Yet in December an AM webinar found some motor retailers were still ignorant of the incoming FCA Consumer Duty.

Sheldon Mills, executive director of consumers and competition at the FCA, said: “The Consumer Duty will bring about a step change in the way financial services firms treat their customers and we welcome the work firms are doing to implement it.

“Given the scale of the reform, we recognise that some firms need to make significant changes.

“For firms which are further behind in making the necessary changes, there is time to put that right and for them to show they are acting in the spirit of the new duty.”

“As they oversee the implementation of the duty, firms’ boards and management bodies will want to particularly focus and provide challenge in the three areas above,” states the FCA’s report.

Mills added: “Firms will also see the benefits of the duty, with increased trust in the sector, more flexibility to innovate and in time fewer rule changes.”