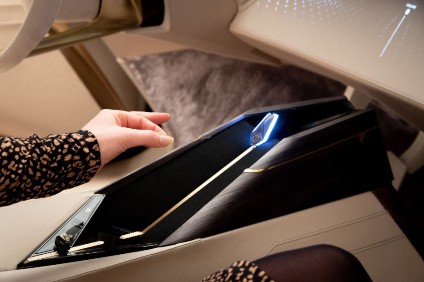 PSA’s DS Automobiles is working with Ultraleap to bring mid-air haptic and hand tracking technology to future models in a move that could spell the end for touchscreens and buttons.

DS research has found that the use of gesture control and haptics in an automotive setting results in three times greater accuracy when compared with a touchscreen.

Drivers and passengers can control infotainment and navigation by making simple hand gestures in mid air.

The skeletal tracking technology generates a virtual model of the hand’s movements, modelling finger, palm, bones and joints, which enables the system to predict the position of a finger even if obscured from view.

Once the gesture command has been registered, the system provides the haptic feedback response to confirm that commands have been recognised and understood.

Using an array of ultrasonic speakers soundwaves are choreographed to create a single, localised point of high pressure in front of the screen or surface. The slight vibrations resulting from the waves can be detected by skin receptors, simulating the sensation of touch.

These waves can be manipulated to create a series of different impulses, enabling the user to perceive different responses, such as a simple click, a dial or a ripple.

A range of systems in the car are controlled in this way. The response is augmented using artificial intelligence resulting in accurate gesture control with enhanced tactile feedback in mid-air.

This type of system has been proven to offer three times greater accuracy when compared with traditional touchscreens reducing eyes off the road time and mental load. In trials, 25% of participants using gesture control and haptics made no offroad glances at all, offering improved driver control and safety.