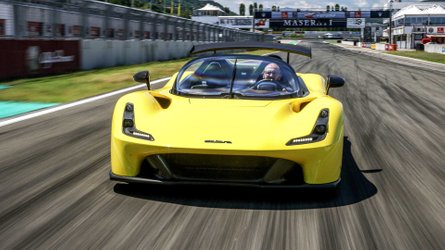 Keen readers may know Dallara as one of the great powerhouses of the racing world, but you’d be surprised to know that Giampaolo Dallara has done equally impressive work on road cars. As such, their most recent creation, the Stradale, has received a very special livery from Garage Italia honoring the fighter jets used by the Frecce Tricolori aerobatic team.

To the uninitiated, Giampaolo has built himself an engineering empire most recognizable for its success on the race track but was also paramount in developing road cars like the Lamborghini Miura. The company is responsible for building racing cars and chassis’ for Indycar, Indylights, Formula 3, GP2, GP3, Formula E, and WEC. You get the idea.

While the Tricolori squadron began flying the North-American F-86 “Sabre”, transferring to the G.91 until 1982, both wore the same deep blue color. Honoring the 60th anniversary of the world’s largest aerobatic team, the special Stradale bears a matte-finish wrap featuring the same blue of the jets that tore through the skies of yesteryear. Each side of the car is also adorned with Tricolore stripes being emitted from what appears to be fighter jets.

While certainly impressive, Giampaolo’s company isn’t just a king on the track. Like many manufacturers who have road and track programs, the knowledge from the race track transfers very well to a performance road car. As such, the Stradale is very much a race car for the road. With many options on offer – including the windscreen – the ethos of the vehicle is keeping the weight low and downforce high.

Unlike the extremely aerodynamically sensitive McLaren Senna, the Italian offering brings a much more reserved aesthetic to the table – As Giampaolo Dallara always looked up to Lotus design genius Colin Chapman, the Stradale is a distant cousin of his 3-Eleven. We’ll let you decide on the aesthetics, but if ever there was a car that could wear a fighter-jet inspired livery, you’d be hardpressed to bet against this one.