Citroen describes it as a ‘multi-purpose electric device’ with more use cases than just a car.

Citroen has taken the wraps off the all-new Oli (pronounced all-e) concept – a precursor to all future production models in terms of design, interior and ideas of sustainability. Building on from the quirky Ami electric city hatchback, the carmaker says the Oli concept is centred around ideas of reducing weight and complexity in EVs, while making them affordable at the same time.

Citroen describes the Oli concept as a “working platform”, and goes as far as not calling it a car but a “multi-purpose electric device”.

The Oli’s design is as unconventional as concepts go. Measuring 4.2m in length, 1.65m in height and 1.90m in width, the aesthetic approach is clearly exaggerated.

The central theme of this concept is the contrast between horizontal and vertical lines against the flat and curved surfaces. For instance, the flat bonnet, the roof and the rear pick-up bed are contrasted by a vertical windscreen and an upright front and rear fascia. A similar theme can be noticed in the design of the headlamps and tail-lamps which have a vertical element flanked by two horizontal lines on the top and bottom. The flat surfaces are also contrasted with gentle curves on the doors and wheel arches.

And while the design is unorthodox, Citroen says function has been prioritised over form. Like the bonnet and roof panels, which are made of recycled cardboard structures with a protective and durable coating and can be used as a multi-purpose deck. These lightweight structures are strong enough to even withstand the weight of multiple adults, according to Citroen. 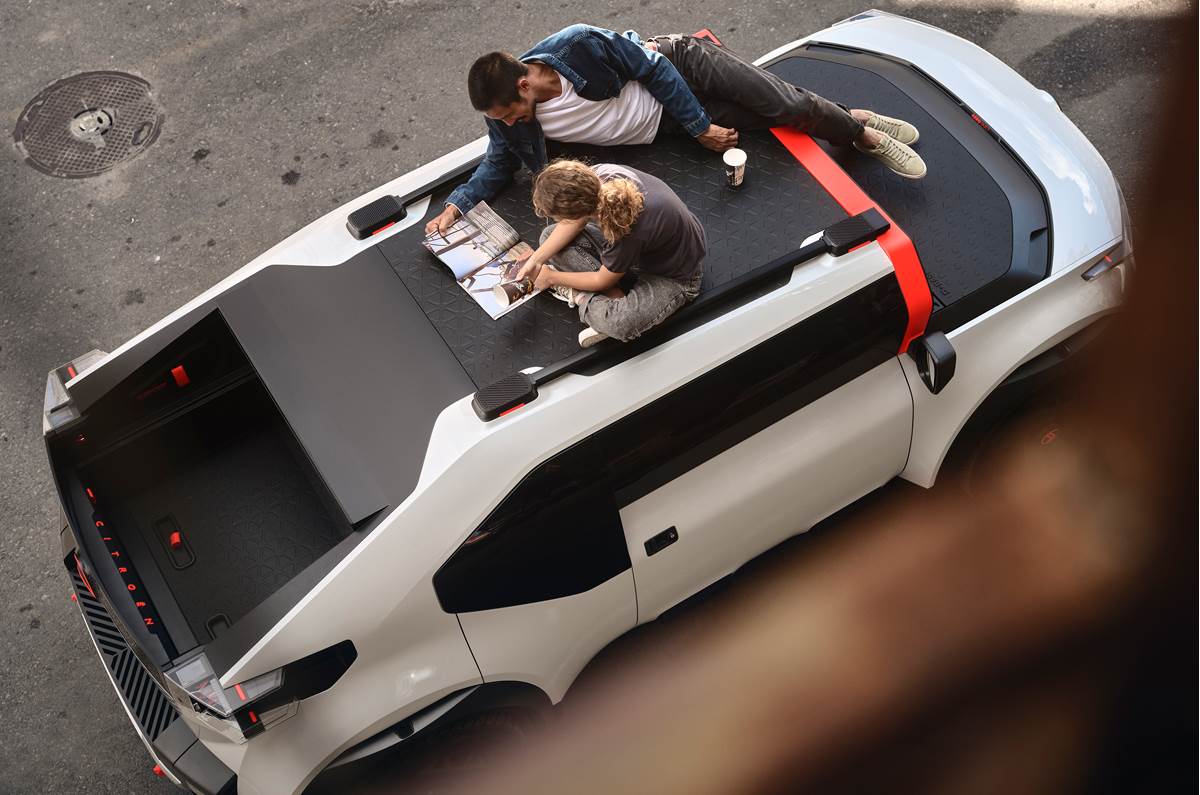 The rear pick-up bed, which also gives the Oli its distinctive silhouette, has a load panel that’s both removable and expandable to open up more cargo space. And while one may say the vertical windscreen defies aerodynamic efficiency, Citroen says a vertical windscreen requires the smallest glass area – thus reducing cost and weight – that does not need to prioritise aerodynamic efficiency for the performance it has on offer (more on that later).

Another interesting design highlight of the Oli concept are its doors – the front doors are larger and the narrower rear doors are hinged at the rear, allowing unobstructed access to the cabin. The glasshouse is also differently designed for the front and rear doors to allow for more light and ventilation for the rear passengers. 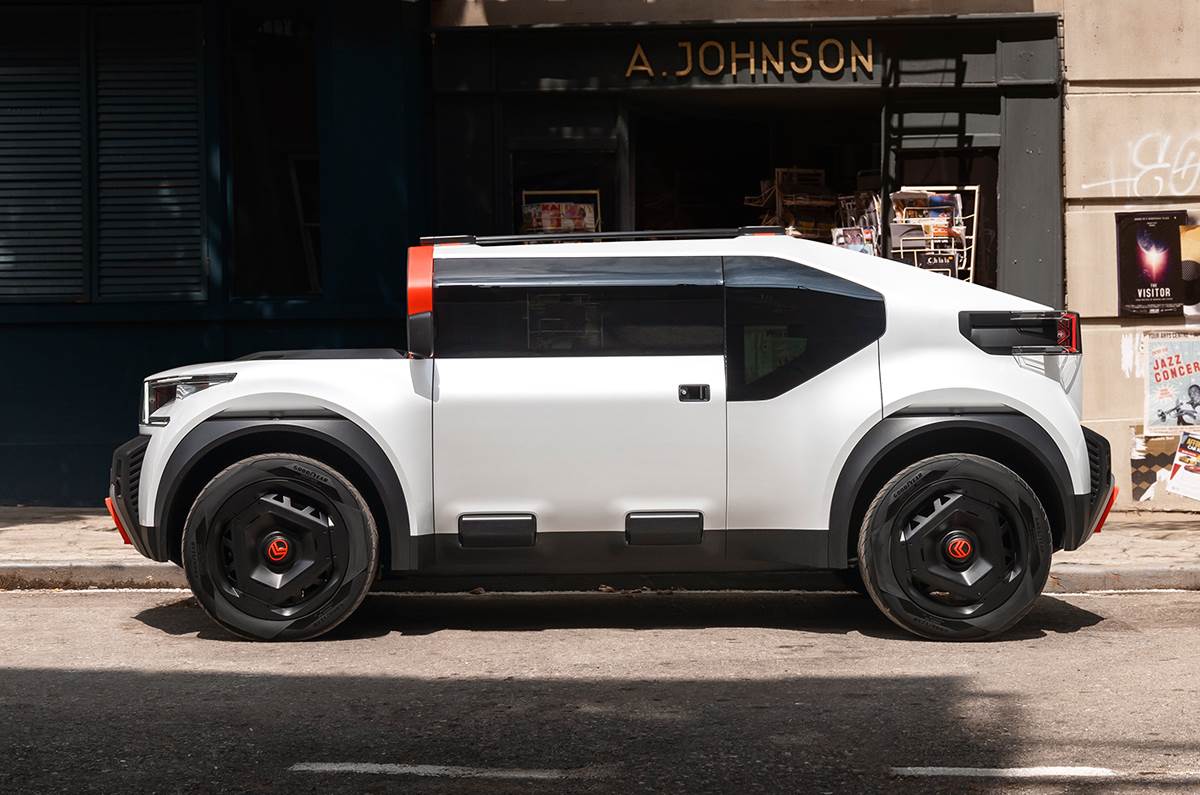 Sustainability being another key element on the Oli, the protruding front and rear bumpers and the wheel arches are made of 50 percent recycled plastics and are 100 percent recyclable themselves. The tyres, which have been co-developed with Goodyear, use sustainable materials such as sunflower oils, pine tree resins and full natural rubber instead of synthetic ones.

The Oli concept also boasts of Citroen’s new chevron logo; and in typical Citroen fashion, there are coloured highlights on the bumpers and around the windshield frame.

Contrary to the exterior, the interior of the Oli concept is rather simple and minimalistic. The dashboard features a single symmetrical beam running across its width from which hangs the steering column and wheel on one side, and a smartphone dock and five toggle switches for the air conditioning system in the centre. The central beam is underlined by a storage shelf that’s made of recycled 3D-printed thermoplastic featuring flexible “mushrooms” which keep objects like coffee cups or soda cans in place. 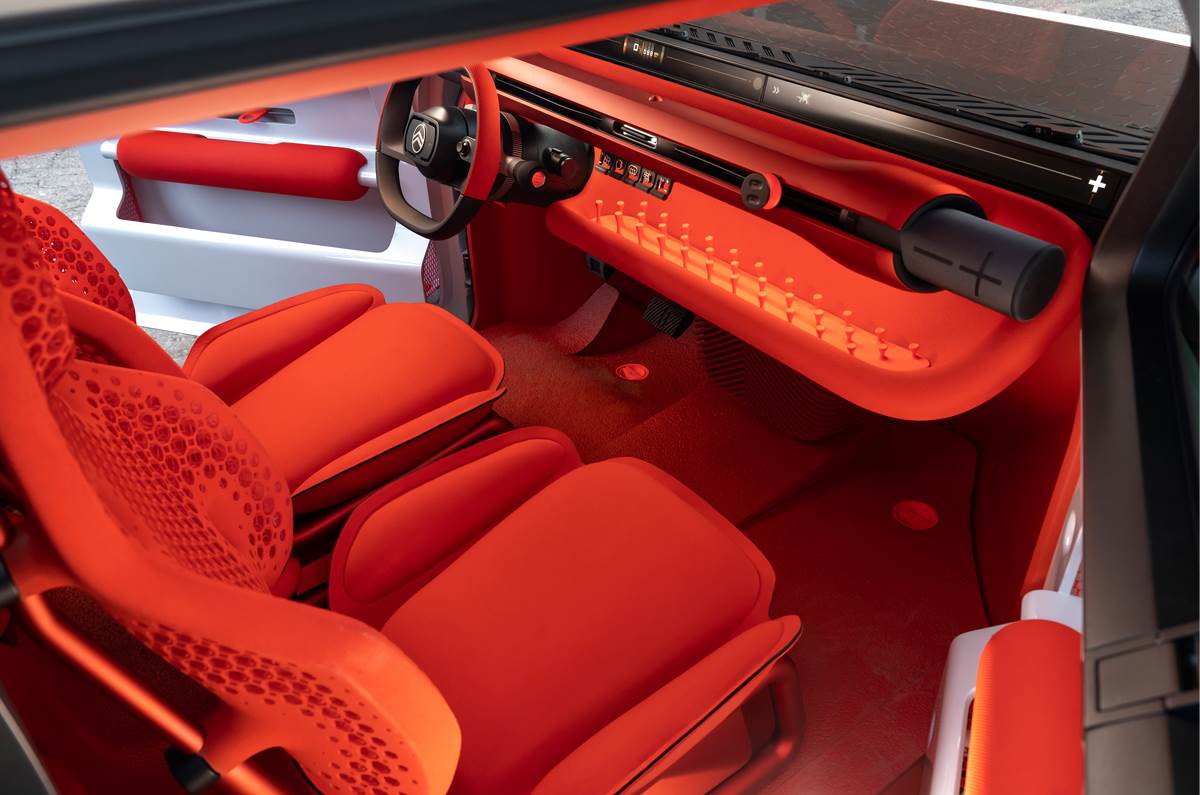 What’s a rather welcome surprise is the lack of multiple infotainment screens. Instead, the central beam houses an electrified rail into which accessories can be plugged via USB sockets that slide along it. Your phone also doubles as your infotainment interface, which, once plugged in, is merged with vehicle data such as speed and charge level. The information is displayed on a slim, horizontal screen across the width of the lower windscreen surround. 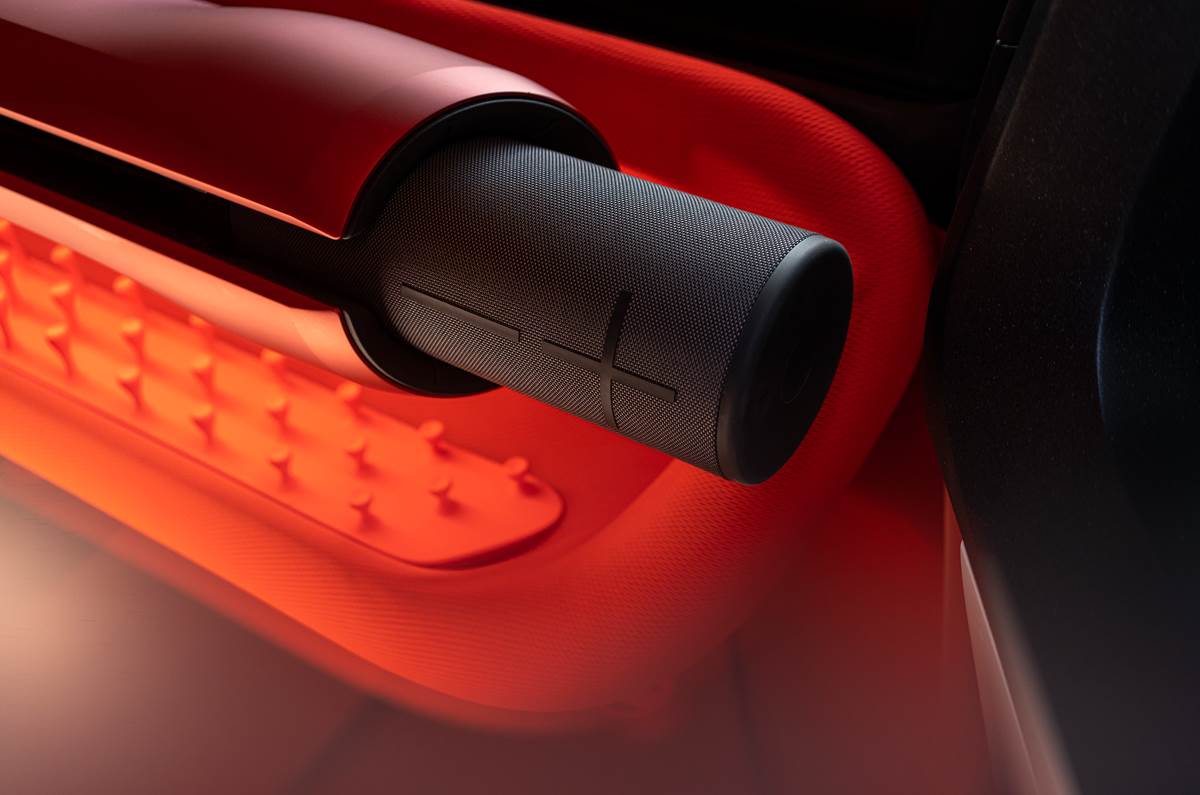 Citroen says that this not only eliminates the complexity of infotainment systems, but also reduces weight and usage of materials. Similarly, there is no in-built audio system either. Each end of the central beam is hollow where cylindrical Bluetooth speakers can be docked to make for your own in-car audio system.

Coming to the seating of this concept, mounted on exposed tubular frames, the seats feature separate bases and backrests, and are made from recycled polyester. The backrests with their 3D-printed mesh design look particularly unique. 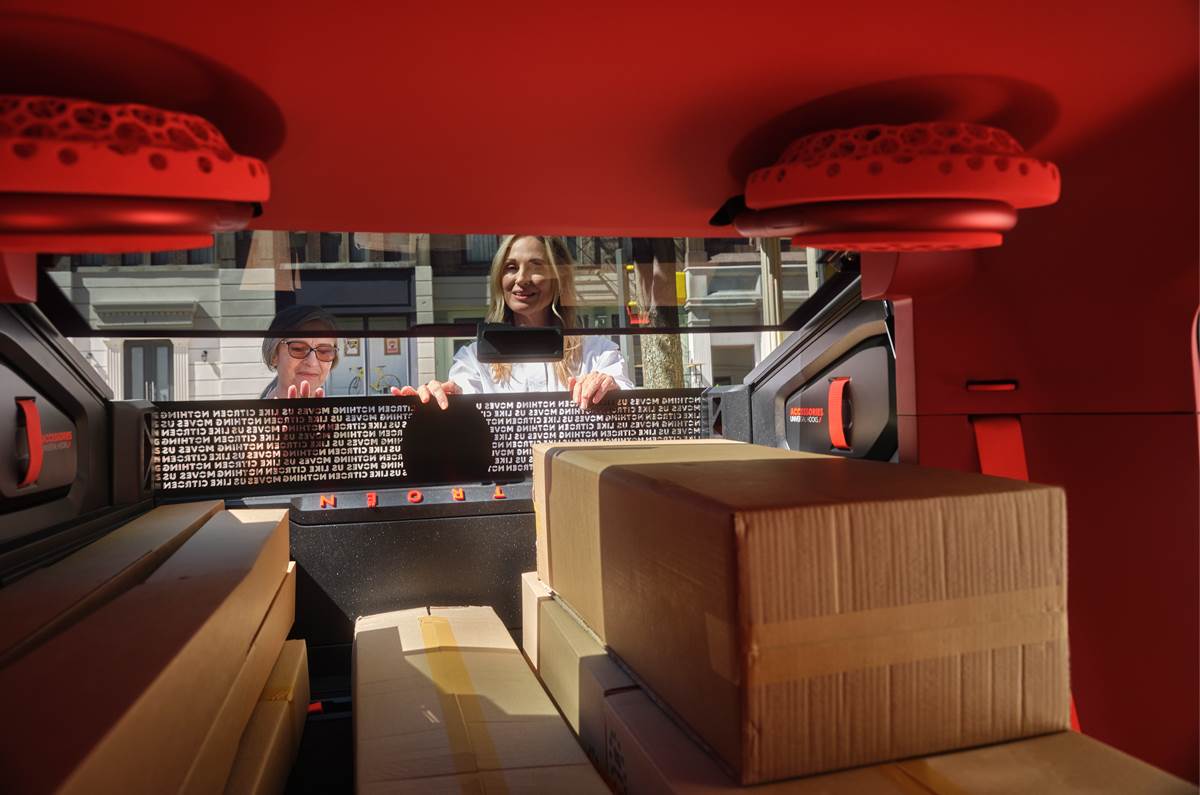 The exposed frame of the front seats can also be used as mounts for accessories for the rear passengers. The rear seat backrests also fold down flat and the individual rear head restraints fold out into the roof. This opens up an extended load area for the cargo deck behind.

All these interior trims are completely recyclable and customisable, says Citroen.

Although currently a concept, Citroen is targeting a weight of around 1,000kg for the Oli-based production car, and that’s pretty light for a 4.2m EV. Thanks to all the effort that has gone into shedding weight, Citroen says the Oli does not need a huge battery pack to offer a usable driving range.

The company claims the Oli’s electric powertrain needs only a 40kWh battery pack to deliver a target range of up to 400km. Top-speed will, however, be limited to only 110kph in the name of efficiency, which is also why the vertical windscreen does not create enough aerodynamic drag as it will never operate at very high speeds. Citroen thus expects a realistic consumption of 10kWh/100km, and it will also be capable of fast charging with 20 to 80 percent of the batteries being topped up in just 23 minutes. 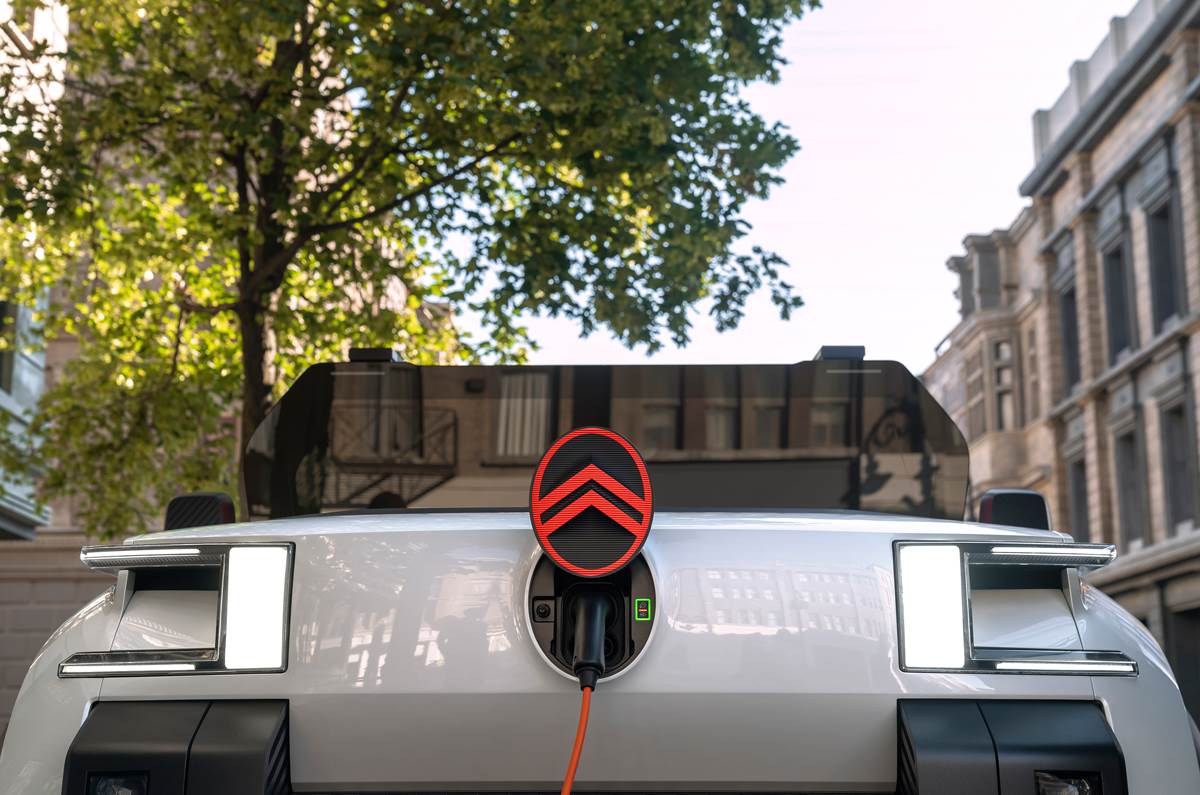 The Oli also supports vehicle-to-grid (V2G) and vehicle-to-load (V2L) capabilities. This means the Oli can be used as a backup power source in the event of a power cut. It has a power socket output of 3.6kW, so it can theoretically provide power to a 3000w electric device for around 12 hours.

While all ideas may not make it to future production in the physical shape seen here, the Oli is meant to drive home Citroen’s idea of future sustainable mobility. “There’s no sense in proposing cool materials or designs that will never influence future production vehicles,” says Pierre Leclercq, Citroen’s head of design. “We are taking a risk with Oli because we need to push creativity for production.”

New cars, SUVs to have six-airbags standard from October 1, 2023