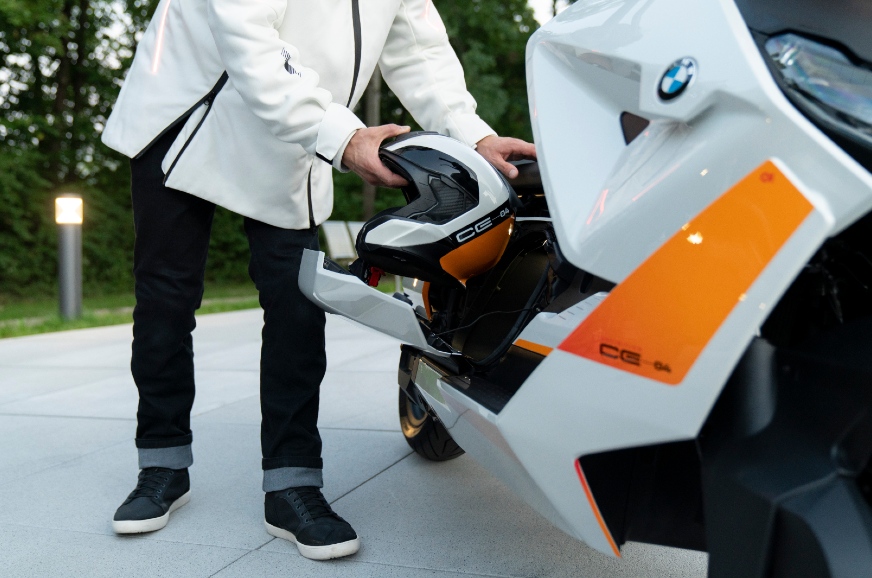 BMW has revealed its Motorrad Definition CE 04, which the company is saying is the near-production version of the BMW Motorrad Concept Link.

BMW has said that the “electrically powered Concept Definition CE 04 has been consistently developed and adapted to meet the everyday needs and requirements of the customer.”

Despite being near-production ready, BMW has made sure that the CE 04 stays true to the Concept Link’s original design. While speaking about the design BMW said, “We have managed to transfer many innovative elements and details of the concept into the series. The technical realities of electric drive – such as the flat energy packs in the underfloor and the compact drivetrain, allow us to create a highly distinctive design which defines a new, urban aesthetic and which differentiates itself clearly from conventional styling.”

With the battery under the floorboard, BMW has managed to improve the storage capacity on the scooter. The space under the seat is large enough for a helmet while also leaving room for other equipment. This storage area is also illuminated. Speaking of illumination, the CE 04 uses LED lighting all around.

According to BMW, “a scooter is not a ‘fun bike’ which is taken for ride in the mountains in fine weather, but a practical, everyday vehicle for driving from home to the office or meeting friends in the evening – simply a vehicle for every day use in the city”. This is why the CE 04 has been designed around short urban commutes.

As for equipment, BMW has said that the CE 04 features a 10.25-inch display that will feature smartphone connectivity. This is likely to be the largest screen in the scooter segment when it makes it to production.

Elation Freedom Announced As ‘First Luxury EV Hypercar’ Made In US