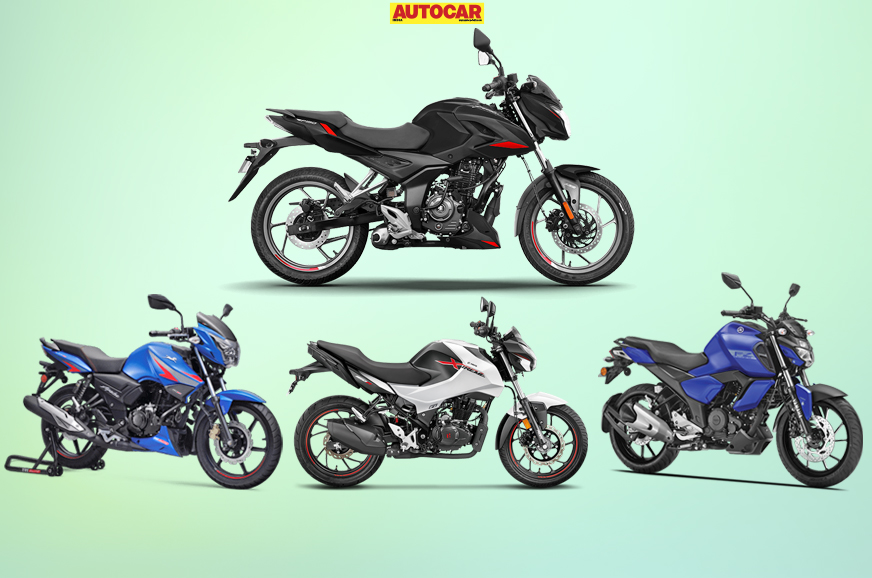 The Bajaj Pulsar P150 is more powerful than its predecessors, but also the heaviest motorcycle in its class.

Bajaj recently launched the Pulsar P150 in India, its newest contender in the 150-160cc motorcycle space. It gets new styling, a brand new engine that makes more power and it weighs significantly less than the aging Pulsar 150. Here’s how the Pulsar P150 stacks up against the competition: the TVS Apache RTR 160 2V, Hero Xtreme 160R and the popular Yamaha FZ.

The P150’s new air-cooled single-cylinder engine makes slightly more power and torque than its predecessor, however, it still isn’t close to the segment best, the Apache RTR 160 2V. While the Bajaj makes 14.5hp, the TVS’s mill develops 16.04hp.

The Hero Xtreme 160R slots between these two bikes, with its engine developing a little over 15hp. The Yamaha FZ, meanwhile, languishes at the bottom of the horsepower chart, making a paltry 12.4hp. As for max torque, the Hero makes the most at 14Nm. A point worth noting is that all motorcycles have a 2-valve set-up and their engines are paired with a five-speed gearbox.

All motorcycles here feature a telescopic fork and monoshock suspension set-up. In fact, this is the first time that a 150cc-class Pulsar gets a monoshock.

When it comes to braking hardware, the Pulsar, Xtreme and Apache can be opted with a front disc, rear drum set-up. However, in the case of this specification comparison, we’ve only considered the top-spec bikes with a disc brake at the front and back.

Comparing the front brake disc sizes on each bike, it is clear that the Pulsar P150 has the smallest disc at 260mm – 22mm smaller than the 282mm disc on the Yamaha FZ. However, when it comes to the size of the rear disc brake, the P150’s is the largest at 230mm, followed by the FZ, Xtreme and Apache, respectively.

All bikes here ride on 17-inch wheels, shod with tubeless rubber. The Xtreme and FZ have wider front and rear tyres than the rest, with the Yamaha sporting a 140-section rear, something it boasted of since it was launched in 2008. In fact, both the Hero and the Yamaha have radial tyres at the back.

All said, looking at the P150’s relatively skinnier rubber, it seems Bajaj has focused on ensuring the bike delivers good fuel efficiency. We shall test this once we get our hands on the bike.

The Yamaha FZ has the least powerful engine, but it somewhat makes up for its power deficit by weighing the least in this quartet. The Apache is next, followed by the Xtreme that tips the scales at 139.5kg. The Pulsar P150, despite its significant weight advantage over its predecessor, is still the bulkiest motorcycle in this class, at 140kg.

There isn’t a lot separating the bikes when it comes to wheelbase or fuel tank capacities, but a commonality is seen in the 790mm seat height.

The Pulsar P150 has an LED projector light and a neat looking analogue-digital instrument display. However, it, and the Xtreme and FZ, can’t beat the TVS Apache when it comes to features. The Apache’s all-digital cluster features Bluetooth connectivity with navigation. It also gets ride modes that alter the engine’s power and torque, a feature unheard of in this segment.

The Yamaha is the least expensive motorcycle here at Rs 1.13 lakh. What’s interesting is that this bike gets a front/rear disc set-up at this price. Meanwhile, the rest of the bikes have models with a single disc set-up that cost a few thousand more than the Yamaha. The Bajaj Pulsar P150 and Hero Xtreme 160R are priced in the vicinity of each other, but the Apache is the priciest of the lot at Rs 1.24 lakh.

Of these bikes, which would be your pick? Let us know in the comments section below.