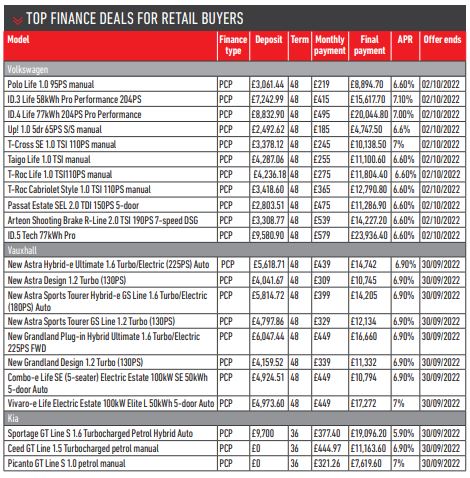 As the automotive market passed the halfway point for the year, there continues to be pressures that captive finance houses need to respond to. The cost of living crisis is hurting consumer confidence, interest rates are at their highest level for 13 years and customers are pulling back on their monthly spending.

And the Government also pulled the plug-in car grant. Stewart Walker, head of data services at ASI, a company which analyses and researches car manufacturer finance incentives, says: “OEMs are looking to reduce tactical marketing spend, but being mindful of the need to support their sales networks in retaining customers.

“All this while endeavouring to maintain the flow of business through their captive banks.”

Increasing interest rates are having a detrimental impact on the cost of new car finance in the UK. Annual percentage rates (APRs) of more than 6% were once the hunting ground of sub-prime used car finance lenders alone, yet there are many captive banks pushing up figures above this level.

AM’s own data looking at some Q3 representative examples from VW, Vauxhall and Kia all have offers above 6%.

Walker says: “UK-based Vauxhall Finance showcases this with clarity, with a shift from an average of 2.6% to 5.9% APR in the space of 12 months.

“Volkswagen Audi Group (VAG), with its ‘Solutions’ PCP product has been perennially strong on finance penetration and has enough confidence that it can retain business, at an average, in Audi’s case, of 6.7% APR in the current market conditions.”

Volkswagen Financial Services (VWFS) says the consequences of the global pandemic and the semiconductor shortage have been “profound”.

The continued semiconductor supply issue has seen most of the industry affected by longer lead times on new vehicles.

VWFS has introduced the option for customers to extend current finance agreements, most noticeably with its short-term Solutions PCP package, which allows customers to finance the optional balloon payment of their current vehicle for 12 months.

VWFS says it developed this product at “lightning speed”, meaning customers can continue to rely on their current vehicles while waiting for the arrival of their newly purchased car.

Walker says that while OEMs have been rolling back deposit contributions or Finance Deposit Allowances (FDAs), these remain important in securing new car finance customers, particularly when APRs are breaching the 6% threshold. Out of all the volume brands featured here, only Toyota has increased its FDAs when comparing H1 2021 with H1 2022. 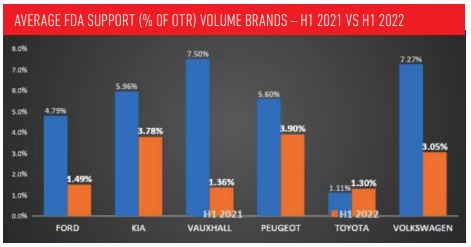 While Vauxhall is still offering FDAs in Q3, this brand has seen one of the bigger drops from 7.5% of on-the-road (OTR) price down to just 1.36%, according to ASI’s data.

Alongside increased OTRs, higher APRs and lower FDAs, OEMs have been saving semiconductors for their more profitable units.

Walker says: “Success for Kia not only comes in it being the second-best selling brand in the UK during 2022, but it is now selling a greater range of alternative fuel vehicles than their European competitors.

“The EV6 and Sportage PHEVs have gained many accolades and are engaging a new ‘premium’ demographic, all of which explains the 39% rise in monthly payments, the highest of the volume brands that we have observed.”

This article first appeared here in the July Issue of AM magazine.