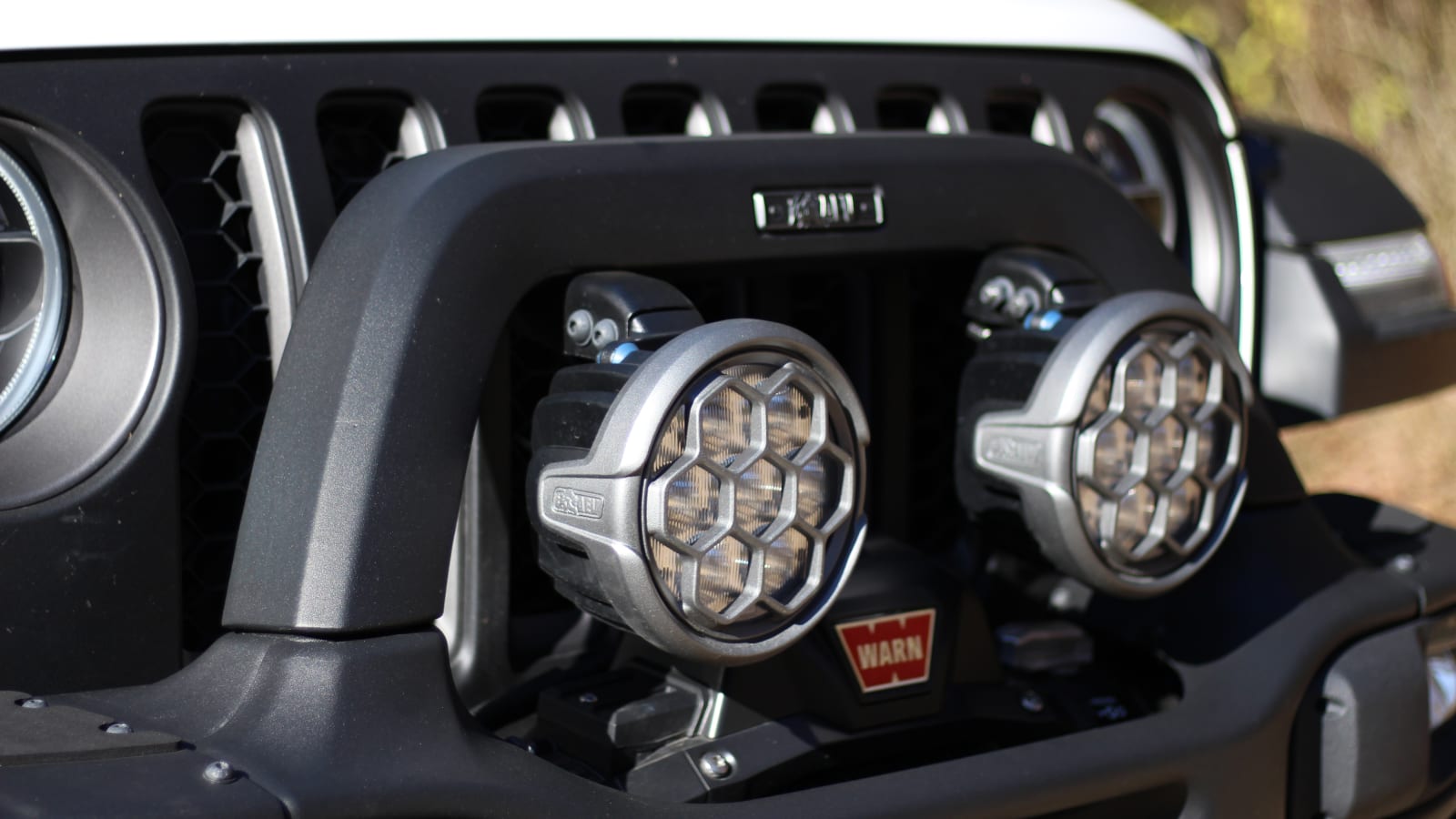 AEV is an acronym that instantly sends our minds flashing to rock crawling, dune climbing and mudding. Those three letters demand a certain level of respect in the off-road community. You’ll find the American Expedition Vehicles name attached to the Chevrolet Colorado ZR2 Bison. The outfit has also swapped Hemi V8s into Jeep Wranglers in the past, and the company offers an extensive selection of aftermarket off-road parts.

The latest big deal from Jeep, of course, is the Gladiator. Jeep’s new pickup came out of the gates with a bang, aiming to be a do-it-all midsizer with the Rubicon-Trail-traversing ability Jeep owners expect. Enough is never really enough when it comes to Jeeps, though. Which brings us to the AEV JT370 Jeep Gladiator that we’re driving.

Those numbers and letters might sound confusing, but they do translate into meaningful things. JT is the Gladiator generational code (like JK or JL Wranglers) and the 370 tells us it has 37-inch tires — a JT350 is also available with 35-inch tires. As much as we were hoping this Gladiator had a big Hemi V8 under its hood, AEV is not in the business of Jeep engine swaps anymore. Instead, all of the focus is on making the truck go further into the wilderness and look meaner than it does from the factory.

To accomplish this goal, the JT370 model adds a long list of AEV’s parts for an extra $12,000. For added capability you get AEV’s DualSport RT suspension system with AEV springs and dampers developed in conjunction with Bilstein. This new suspension is combined with AEV wheels wrapped in either BFGoodrich all-terrain K02 or mud-terrain KM3 37-inch tires that together lift the truck by 2.5 inches. To restore the truck’s factory drivability, AEV switches to a 4.56 axle ratio and addresses lift-related suspension geometry issues with a correction kit. 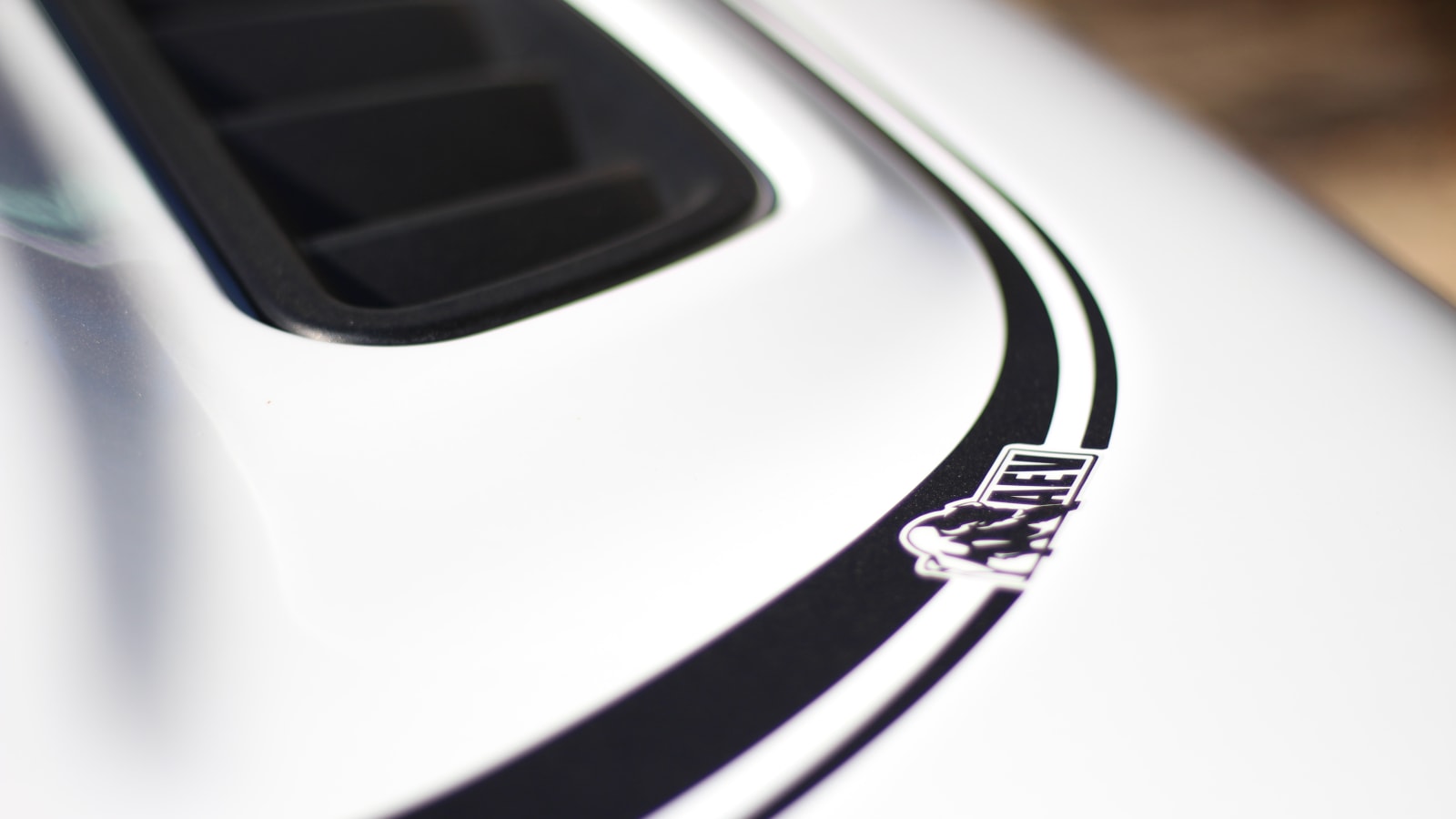 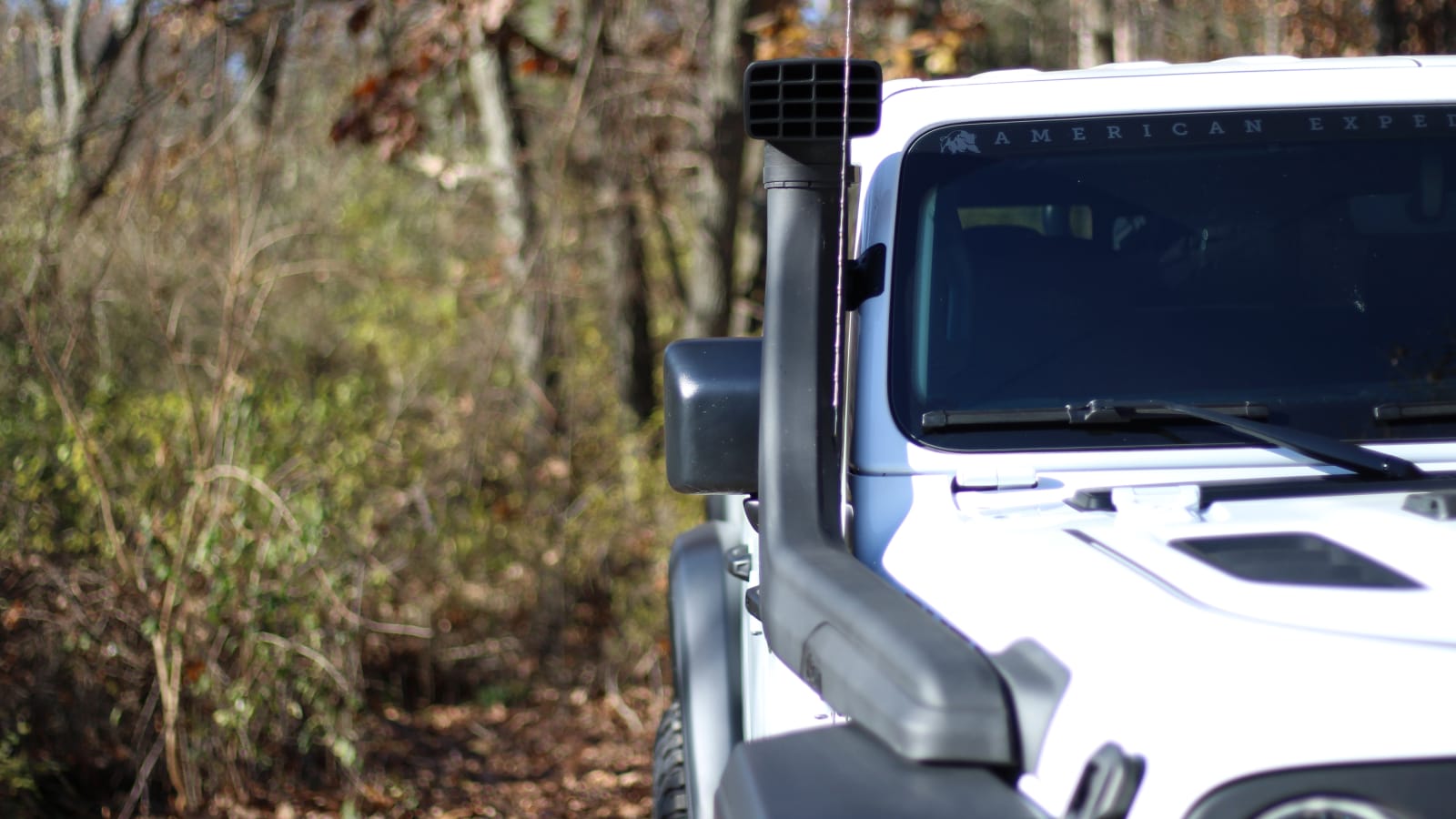 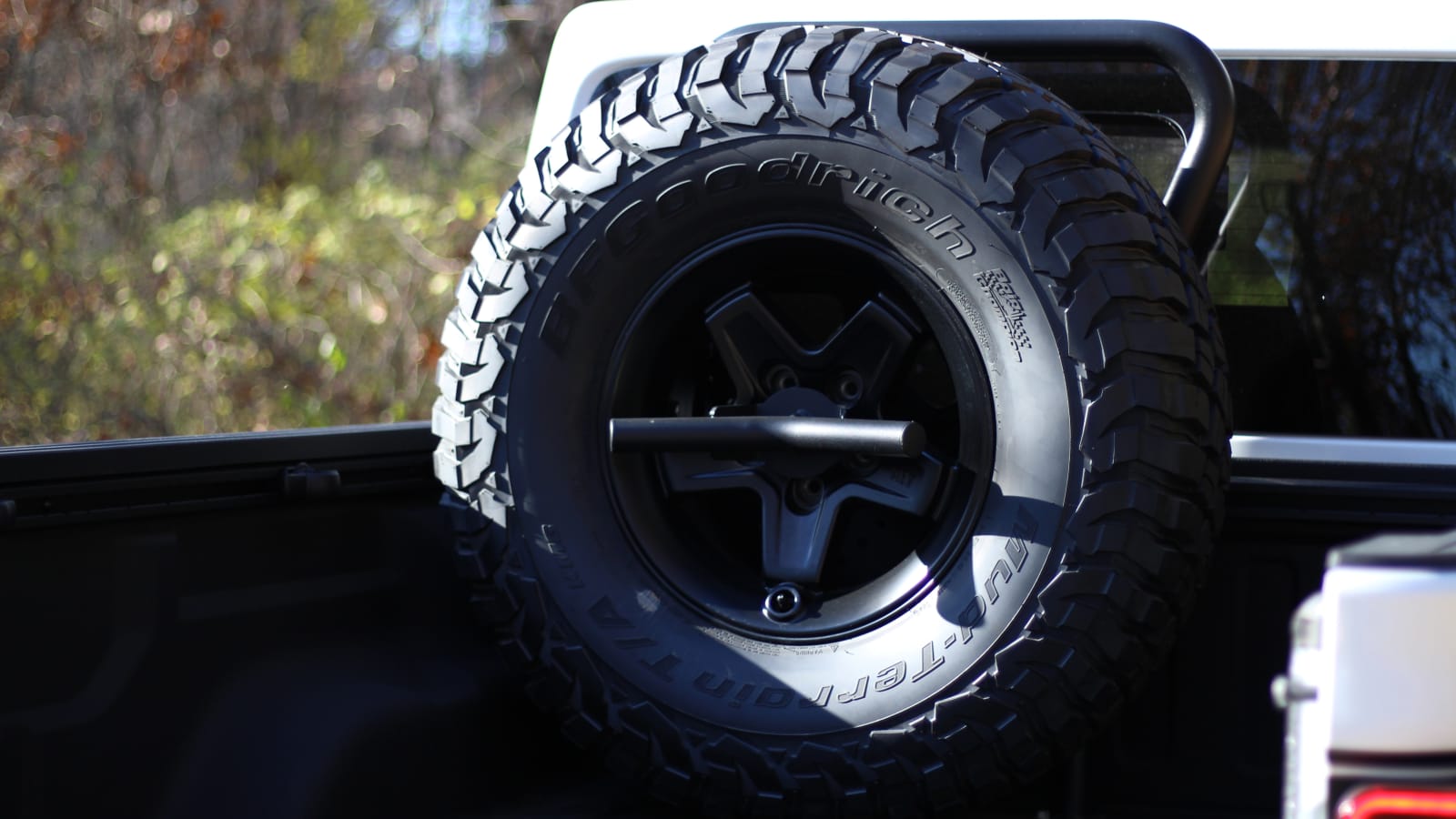 You also get an AEV steel stamped front bumper, front skid plate, LED off-road lights and a number of appearance items that help this truck stand out as the AEV Gladiator. These include a black graphics package (hood and tailgate decals), fender badging, AEV seats and an AEV instrument cluster. The specific example we drove had a number of additional options such as a snorkel kit, a Warn winch, front and rear differential skid plates, a bed-mounted full-size spare tire, an additional Baja light bar (under the bumper), the leather upholstery upgrade and some other small interior add-ons. In all, it totaled to approximately $19,000 of extra equipment. Combined with the new Gladiator Rubicon it came on, our tester was $74,000.

Crikey, that’s a lot of money, but AEV tells us that price is average for what its customers end up spending, all-in. So, is it worth it?

AEV says the goal of this package is to enhance the Gladiator without ruining the excellent truck that Jeep delivers from the factory. The Bilstein dampers and big, pillowy tires result in a comfortable and forgiving on-road ride. Potholes appear extra small; curbs shrink to nothing, and you gain a new sense of undue invincibility way the hell up there. We didn’t have the chance to tow, but AEV says the Bilstein dampers and its suspension system make the Gladiator less jittery under the load of a trailer, making it a better tow vehicle than the stock version.

As for off-road capability, those couple extra inches of ground clearance will likely prove useful if you tackle extreme terrain, but the most we were able to put this truck through were some short, undulating one-track dirt trails — there are no all-inclusive trips to Moab trip during Covid-19 times. The Gladiator’s narrow footprint is a benefit on the trail, and wider tires don’t ruin it. The truck rides well through the forest, and the damping is perfect as we pound up and down through quick elevation changes, exercising the suspension. 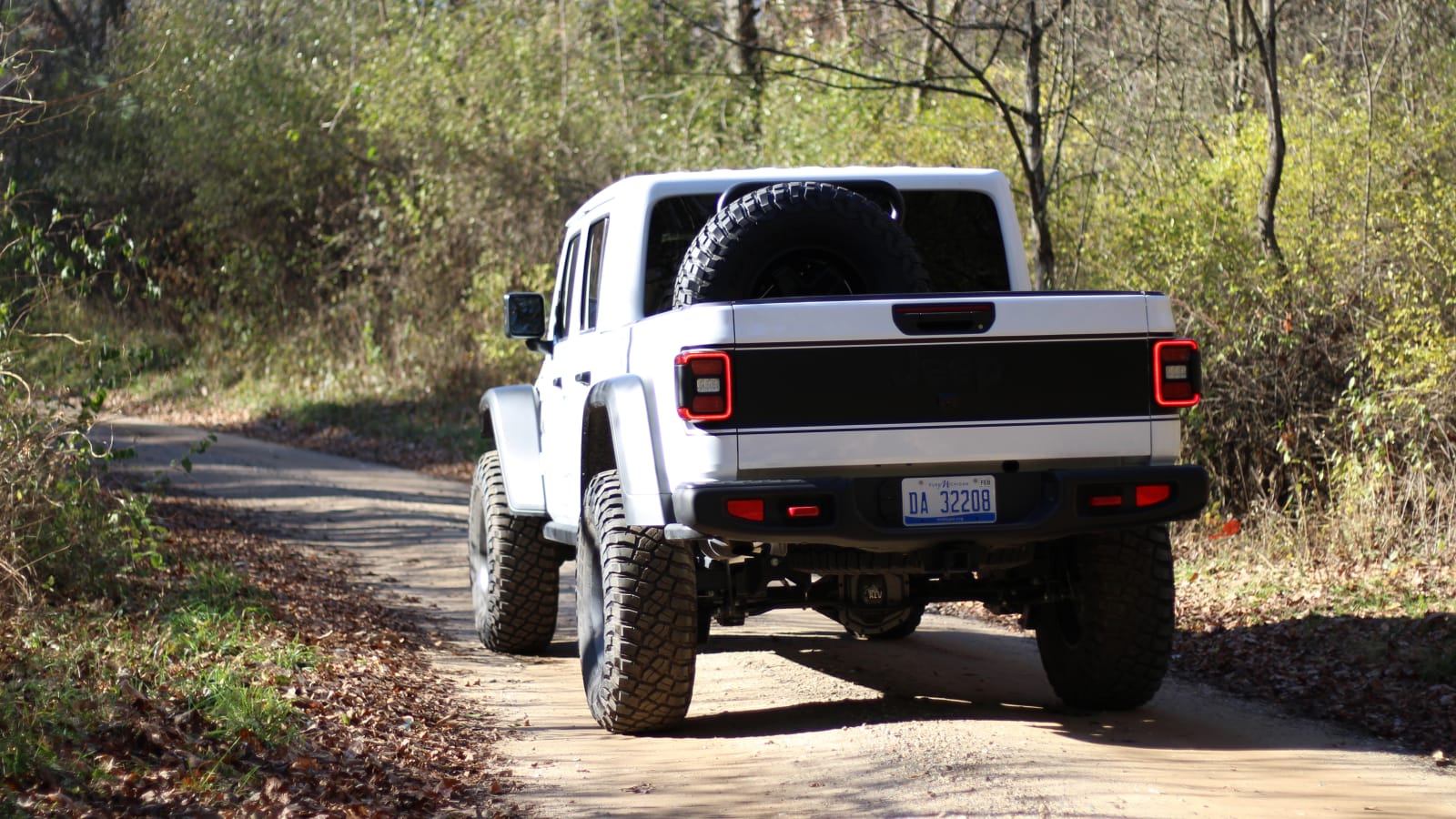 Unfortunately, the big tires also enhance the Jeep’s inherent flaws. Constant steering adjustments are necessary, as the Gladiator is always nervously moving around on dips and dives. There’s an extra level of focus needed to keep the truck in its lane compared to other vehicles, but that comes with the Jeep territory.

It’s not a total boat when we toss it into corners. The body rolls, but it takes a set nicely and never feels tippy or unsteady. That said, the big tires squeal in protest if you try to go around a corner with any amount of enthusiasm. In straight-line driving, the tires aren’t as loud as we were expecting, but some of the tire roar is drowned out by the engine, incessant wind noise and the body groaning/creaking. It’s like a really terrible musical where random people off the street were told to bring whatever they want and make as much noise as they can. But hey, it’s a Jeep thing.

When you roll down the windows, the snorkel shouts its intake wail into the cabin. It’s the only aspect of the powertrain experience that feels different from a standard Gladiator. AEV doesn’t touch the 3.6-liter V6 or eight-speed automatic transmission — there are no exhaust, engine-tune or other powertrain parts available from AEV.

The interior items are subtle enough that they’re hardly noticeable. Our tester’s specially painted dash panel and painted interior hardtop look like they could be factory options. The AEV instrument cluster similarly appears stock save for a small “AEV” logo in the tachometer. Most noticeable was the $2,400 AEV Premium Leather Upgrade, which adds nicer leather with stylish creased inserts. It’s comfortable, and the design spruces up the interior by a smidge. One option you should really spend a minute thinking about is the $599 bed-mounted spare tire. The giant 37-inch spare tire makes it impossible to see out the rear window, so you’re stuck using the truck’s side mirrors for all rearward vision.

Any Gladiator trim can be outfitted with the JT370 package, but if you don’t have a Rubicon, you’ll have to pay AEV to buy and install Rubicon fenders. That’s because the 37-inch tires don’t fit under the standard fenders, but if you go for the JT350, you won’t need them. Attaining one of these is easy enough, too. AEV partners with more than 100 Jeep dealerships throughout the country, so you can simply buy it through a dealer as you would any other Gladiator. If you already have a Gladiator, the AEV folks in Wixom, Mich., will be happy to modify it. All the AEV parts have a 12-month warranty, and the Jeep factory warranty is completely unaffected.

As for our verdict, the JT370 package is for the Gladiator owner or buyer who wants a turn-key off-road build. If you don’t want to or don’t have the patience to acquire and install an assortment of parts over time (the cheaper option) but still want a lightly modified truck, this is a good path. You can simply give it to AEV, and this package (perhaps with additional options) will be just what you want.