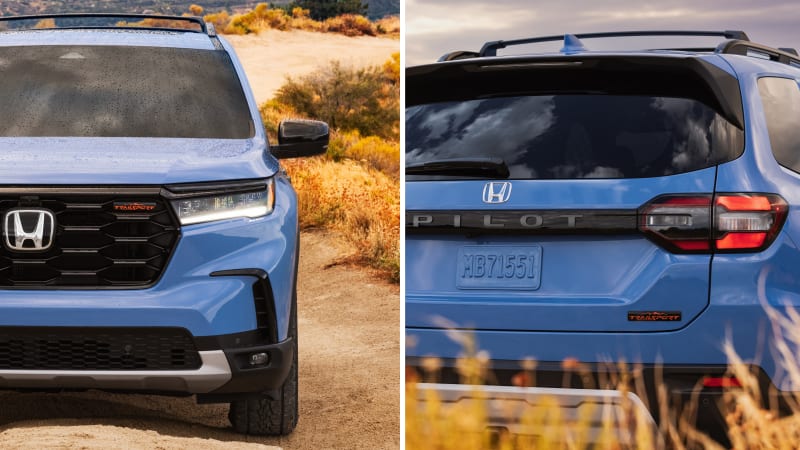 BRECKENRIDGE, Colo. — To this day, Honda has never built a warlord-grade body-on-frame SUV, the sort that serious off-roaders would actually consider taking off-road. And no, rebadged Isuzus don’t count. So you might think it a bold reach to create a off-road-optimized machine from a Honda Pilot, but the company founded by a rebellious racer who built what’s still the world’s biggest motorcycle manufacturer from the Superfortress-and-earthquake-ravaged rubble of his first business should never be written off.

The Pilot TrailSport is still a crossover and it’s unlikely serious off-roaders will go near it, but this ruggedized version of the next-generation 2023 Honda Pilot is a more complete effort than the last version. You might have missed it, but the TrailSport actually debuted for 2022 on the long-lived previous-generation Pilot as a three-row compliment to the Passport TrailSport. It had tougher tires, a bit more ground clearance and an enhanced-outdoorsiness look to knock’em dead in the REI parking lot. It was competent enough for the average outdoor adventure seeker, but the 2023 Honda Pilot Trailsport gets substantial engineering upgrades that make it a lot more likely to make it to that remote trailhead and back in one piece. Honda didn’t try to make it a rock crawler, but would anyone expect a Pilot to be one?

To be clear, this is in fact Autoblog’s first drive of the next-generation, 2023 Honda Pilot. However, we only have information about the TrailSport, and even that, it’s thin. Basic dimensions and specs are still to be announced, as well as details about the other trim levels. We don’t even know what it really looks like beyond the below teaser photos. Honda kept the camouflaged wrappers on during our drive, which exclusively took place off-road. It’s an odd way to introduce a new generation, but we’re not going to say no to a sneak peek among the peaks of Colorado on the Middle Fork Swan River road near Breckenridge.

Having done my share of backpacking trips to remote areas of the Mountain West, I’ve learned that the goal of such journeys is to get away from the noisy crowds that turn the more accessible destinations into mini-cities. With the pandemic sending even more folks to the great outdoors, a vehicle that can leave the ordinary all-wheel-drive machinery behind and get past the oil-pan-puncturing, exhaust-system-detaching obstacles on the more challenging trails will allow you to reach the more exclusive trailheads and campsites. Honda’s American engineers designed the new Pilot TrailSport to do just that for weekend getaways, even as the exterior designers made it look tougher for the weekday school-dropoff crowd (even with the camo, that much is obvious). Maybe most buyers of this SUV will never take it on any surface more arduous than the gravel road to the lake house, but the idea is that you could if you wanted to.

The head of the powertrain team for the 2023 Pilot spends his spare time obsessively restoring an FJ40 Land Cruiser (about as serious a pure off-road production vehicle as you’ll find on the planet), while the Pilot TrailSport Suspension Potentate (not his real title) gathers parts to build a modernized MGB-GT with a Honda K-engine swap. There’s a noticeable air of Mickey Thompson-style American hot-rodder ethos around the engineers who toughened up this crossover SUV, perhaps with a dash of Soichiro Honda staring down the staid Japanese government bureaucracy once he started building cars.

The new, fourth-generation Pilot once again lives on a unibody platform, but it gets a major stiffening for 2023 (Honda says 20% to 60% increased rigidity, depending on area). The Pilot TrailSport’s suspension is the same as what will be found in the regular 2023 Pilot, mechanically speaking, though with an extra inch of ground clearance plus stiffer damping and sway bars. Tires are Continental TerrainContact A/Ts, allegedly fairly quiet on your local cul-de-sac, while resisting rock punctures in the wild. And there’s a full-size spare, which is a good-to-have for tire problems in the bundóks. The 18-inch TrailSport-only wheels have inset spokes, to avoid ugly scars from obstacles. The torque-vectoring all-wheel-drive system has been rejiggered so that in the new Trail drive mode it will send the majority of torque to the wheel with the most traction. The Pilot’s exhaust system and driveshaft are tucked respectably out of harm’s way. 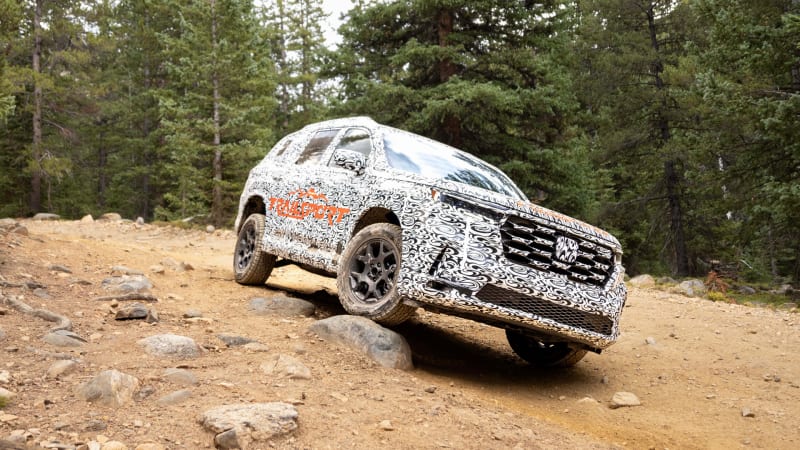 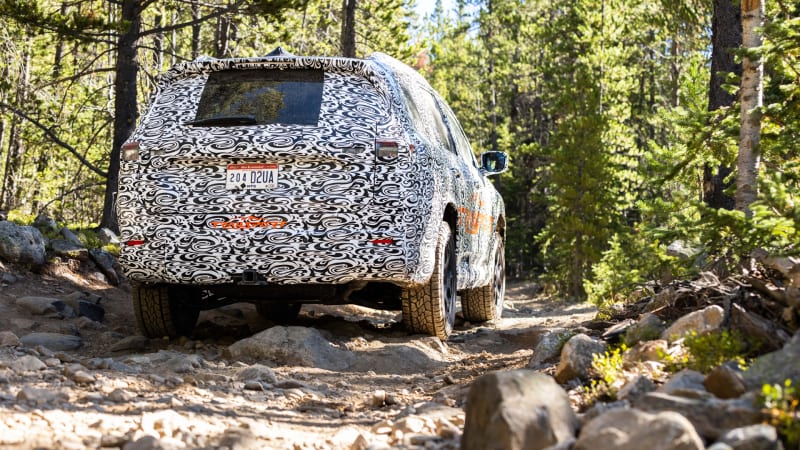 Most significantly, the Pilot TrailSport gets a couple of bad-ass steel skid plates underneath, one protecting the engine/transaxle pans and the other guarding the fuel tank. Each can bear the full weight of the vehicle, which is nice to have when you’re looking for a jacking location. The front plate has a reinforced opening for a tow hook, which you’ll appreciate if you get stuck somewhere. Another equally sturdy recovery point is integrated into the trailer hitch.

How did all this gear work on a rocky trail at 11,000 feet above sea level? I’ve never been a truck guy, though I’ve put some two-wheel-drive cars through not-designed-for-that trail punishment on camping trips, which gives me about the same off-road skill level as most American SUV shoppers today.

Heavy rains the night before had made the going a bit slippery, which didn’t cause any real trouble for the TrailSport’s enhanced all-wheel-drive system; I just put the transmission in D, selected Trail mode, and went. At first, I feared going over watermelon- and dog-sized rocks at anything but the most creeping pace, but after a few hard (but harmless) hits to the skid plates, I gained confidence. The Continental TerrainContacts laughed off sidewall-squishing pokes from sharp rocks. The TrailWatch camera system proved amazingly useful when threading between boulders and downed tree trunks; you hit the button on the end of the wiper-control stalk to toggle the view between low-forward and both sides, making it easy to put the wheels exactly where you want them. I managed to beat on the exhaust a bit, but it brushed off the blows and let the skid plates bear the worst brunt of my off-road inexpertise.

In sum, the 2023 Honda Pilot TrailSport is a comfortable three-row SUV that seems to look fairly outdoorsy and allows an ordinary American driver to tackle easy-to-moderate trails on their way to destinations unreachable by most commuter crossovers like the regular Pilot. Of course, the full story of that regular 2023 Pilot is still to come.