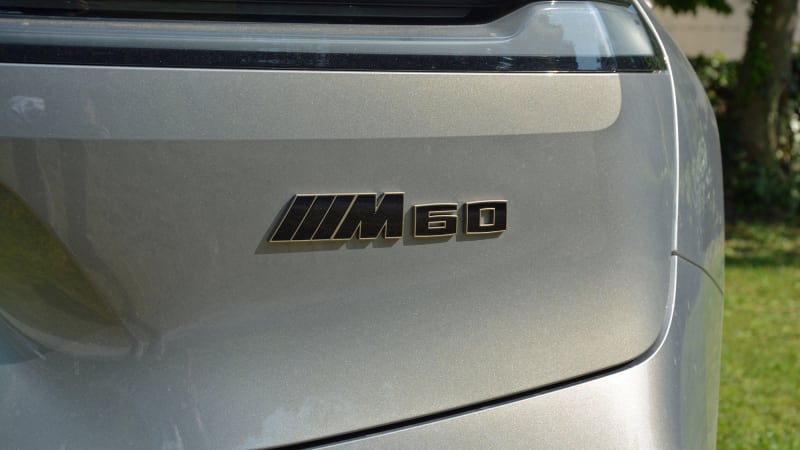 COMO, Italy – BMW’s range of models has been partly defined by letters for many years. You’ve got M, X, and i, and they all represent decidedly different personalities. If you’re familiar with the naming system, you know right off the bat that the i3 and the X6 M are on completely opposite ends of the BMW spectrum. Some models have been pegged at the intersection of two categories, like the aforementioned X6 M and the iX3, but none ticked all three boxes until the electric BMW iX M60 made its debut in 2022. It’s an i, an X, and an M at the same time.

Can it wear three hats at once, or is it on the cusp of an identity crisis? I trekked across the Alps in one to find out.

Most of the changes that BMW made to the iX before deeming it worthy of wearing the M badge are under the body. Power comes from a pair of motors (one per axle for through-the-road all-wheel-drive) that draw electricity from a massive, 111.5-kilowatt-hour lithium-ion battery pack to zap the four wheels with 610 horsepower and 811 pound-feet of torque. That’s enough for a brisk 3.6-second sprint from zero to 60 mph, but note that these figures can only be unlocked with Sport mode and Launch Control turned on. Keep both systems off, and you’ve got 532 horsepower and 749 pound-feet of torque under your right foot, which is still plenty. Maximum driving range checks in at 288 miles with the standard 21-inch wheels and 274 miles with the optional 22-inch wheels, according to the EPA. For comparison, the base iX xDrive50 also comes with dual-motor all-wheel drive, but it offers a total output of 516 horses and 564 pound-feet of torque, it takes 4.4 seconds to reach 60 mph from a stop. Its EPA-rated maximum driving range varies from 305 to 324 miles depending on the size of the wheels.

Chassis changes are also part of this recipe. The air suspension system that’s optional on the iX xDrive50 is fitted as standard on the M60. It automatically adapts the ride height and damping based on current driving, road, and load conditions, and I’m told that it was calibrated by the M division’s engineers to deliver sportier handling. The roll bars are M60-specific as well. 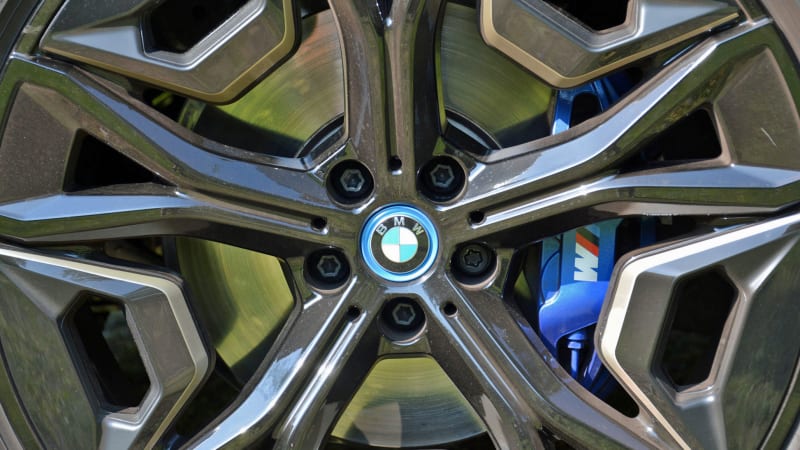 One point that deserves to be clarified is that the iX M60 is not the electric equivalent to the V8-powered X5 M. It’s not a full-blown M car.

“It’s an M Performance vehicle, not a high-performance version,” BMW M boss Frank van Meel told me. “Our target for the M Performance cars is always to give the driver more power and more precision. We change the chassis setup so that it’s more direct and the body control is better without going as far as making a track vehicle like the high-performance ones. The gap between the series-production [iX] and a pure M was so big that customers demanded, ‘could you give me more M character, but not for the track? You can develop it on the track, but please don’t give me a car for the track. I just want more performance and a better chassis, but don’t make it too hard.’“

This approach to design at least partially explains why the iX xDrive50 and the iX M60 look so much alike. Look closely and you’ll notice that the range-topping model gains the Sport appearance package, subtle emblems, and the aforementioned 21-inch wheels. It can be ordered with the optional BMW Individual Titanium Bronze Exterior, which is shown in our gallery and brings gloss black and bronze exterior trim. 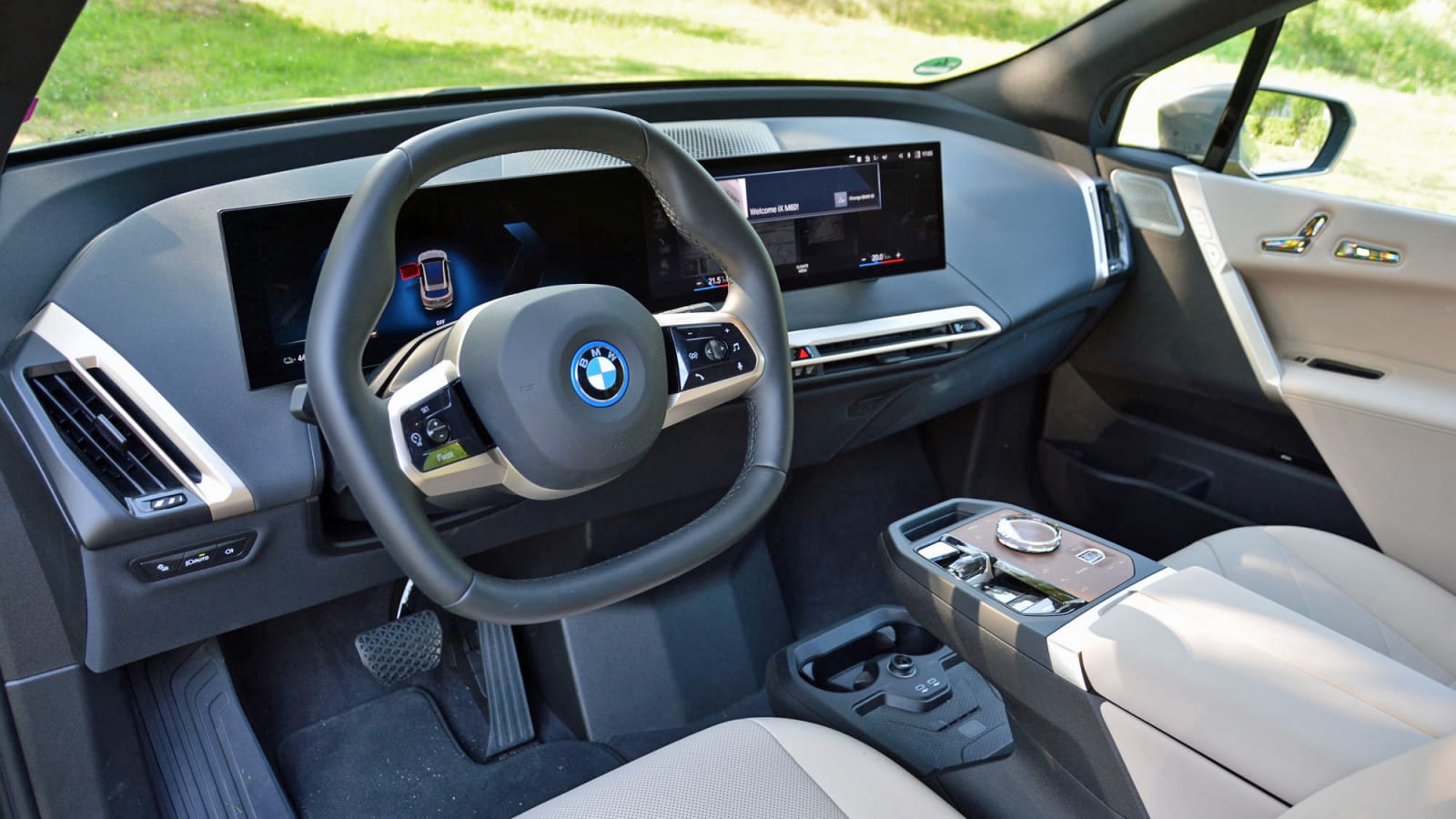 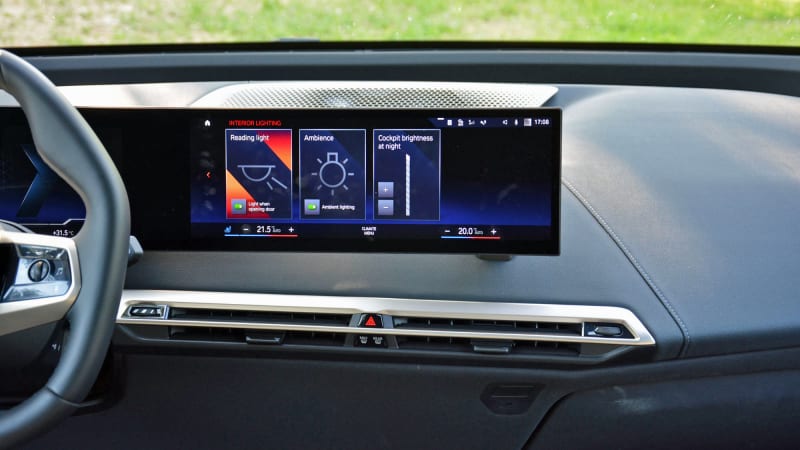 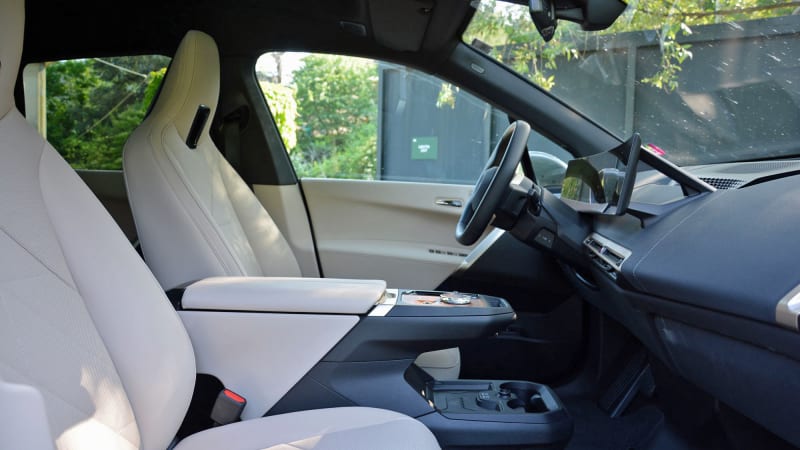 Step inside (don’t forget to check out the carbon fiber door sills first) and you’ll again notice not a lot separates the standard iX and the M60. BMW packs a long list of standard features, like a Bowers & Wilkins surround-sound system, but the two variants look and feel largely the same. That’s not a bad thing: the iX offers a lot of space, comfortable seats, and an intuitive infotainment system with navigation software that cleverly relies on augmented reality to ensure you don’t miss a turn (it’s more useful than it might sound). The steering wheel is a hexagon, the center console has two stories, and the dashboard is defined by an elegant minimalist design. But, since the M60 is part of the vaunted M range, shouldn’t it receive carbon fiber trim, front sport seats, and a sprinkling of M emblems? Nope, van Meel argued.

“The dashboard itself is iconic,” he explained. “That was the discussion with the iX: how much do we want to change in this unique vehicle? It really is unique; it’s different from all of the other BMWs. And, if you look at the dashboard, it would have been difficult to fit carbon fiber onto it because it gives you this very light flying impression. So, we decided not to change too much in the interior.” 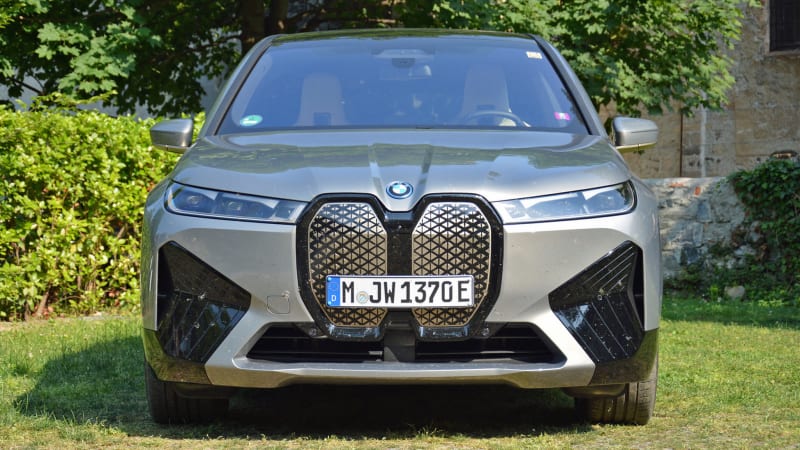 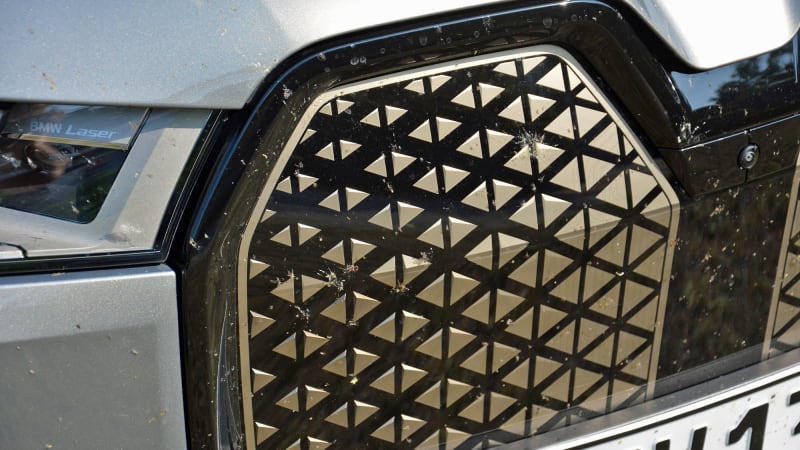 When you’re looking through our gallery, don’t be surprised by the unusually large number of bugs that picked the iX’s front end as their final resting place. It’s not that insects are madly attracted to the design; they ended up there because this wasn’t your average first drive. I picked up the iX in Berlin and dropped it off over 600 miles later in Como, Italy, after crossing Austria, Liechtenstein (a country about the size of Denver), Switzerland, and the Splügen pass in the Alps. I experienced nearly every common type of road imaginable during this trek.

I took the autobahn from Berlin to Munich in the interest of time, and to put BMW’s claimed top speed (155 mph, versus 124 mph for the standard iX) to the test on the unrestricted sections. Getting to 155 mph is a breeze: like most high-power electric cars, the iX delivers quick and linear acceleration with no flat spots. At this speed — which few owners on our side of the pond will experience, admittedly — the iX doesn’t feel as stable as I expected given the M badges that it wears and the bulky battery pack that significantly lowers the center of gravity. More alarming is the range: cruise at 155 mph and you’re losing about a kilometer (or about three-fifths of a mile) of driving range every 5 or 6 seconds, according to the display in the instrument cluster. Gasoline- and diesel-powered engines burn fuel at a spectacular rate at triple-digit speeds, too, but a fuel tank can be brimmed in a couple of minutes, which can’t be said about an EV. Whatever time you gain by driving at 150-plus mph you’ll lose at a charging station. If you’re wondering what’s going to kill the unrestricted sections of the autobahn, this is it.

Austrian authorities aren’t nearly as enthusiastic about the idea of letting drivers choose how fast they cover ground, and the country’s highways are limited to a more America-like 75 mph. At this speed, the iX is right in its element: it’s comfortable and it cruises effortlessly. It’s also impressively quiet … which is easier said than done. Sure, there isn’t a straight-six or a V8 to mute, but taking the engine out of the equation means that other noise sources (wind, for example) finally get the chance to sing for you. Engineers did a good job of keeping noise in check in the iX’s cabin. There is some great technology, too: adaptive cruise control works with steering assist to keep the iX in its lane without playing ping-pong with it (previous BMW systems weren’t as successful). Turning this system on summons a specific configuration in the instrument cluster that shows the car, its lane, and what’s around it, including motorcycles, cars, and trucks. 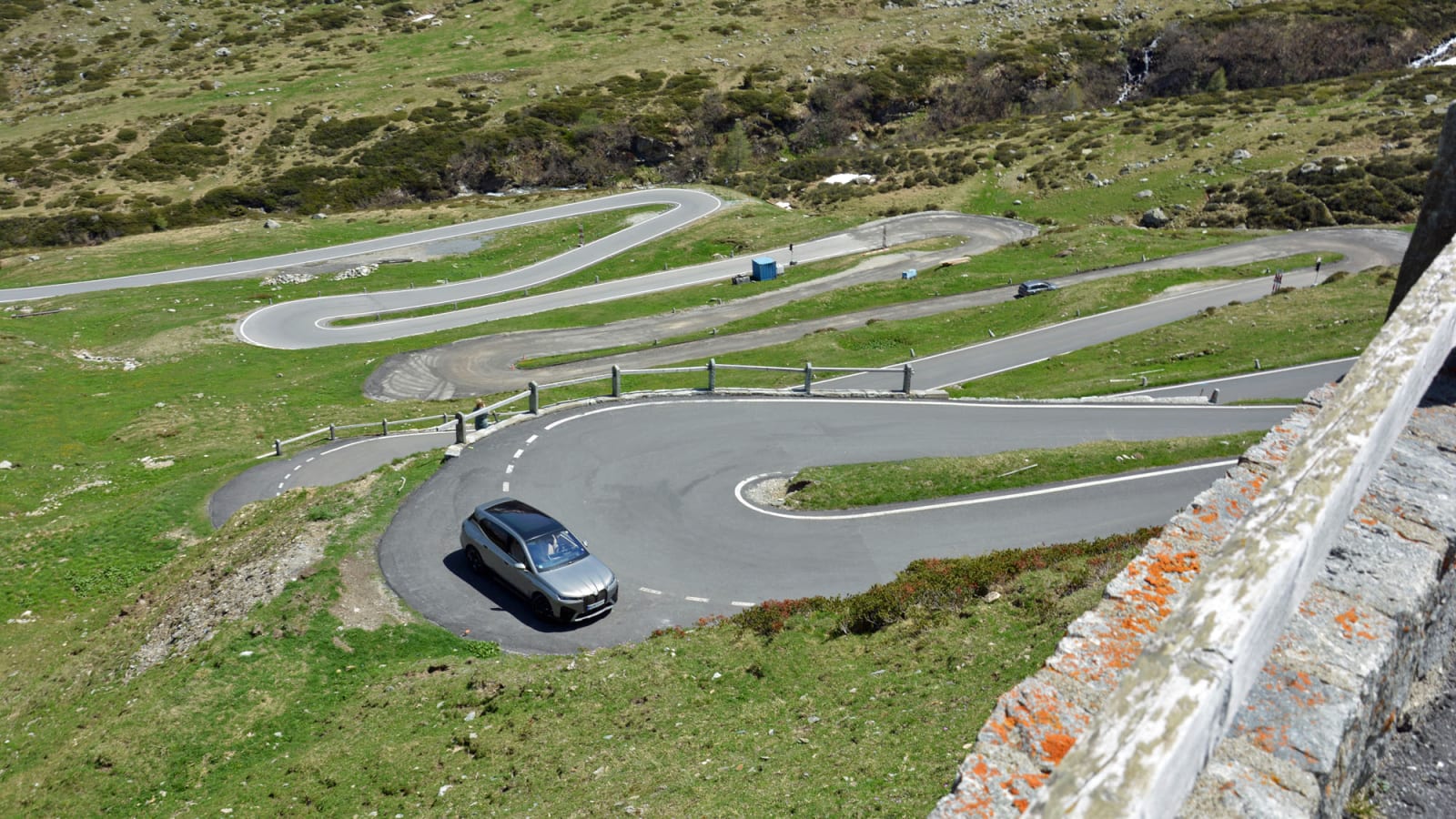 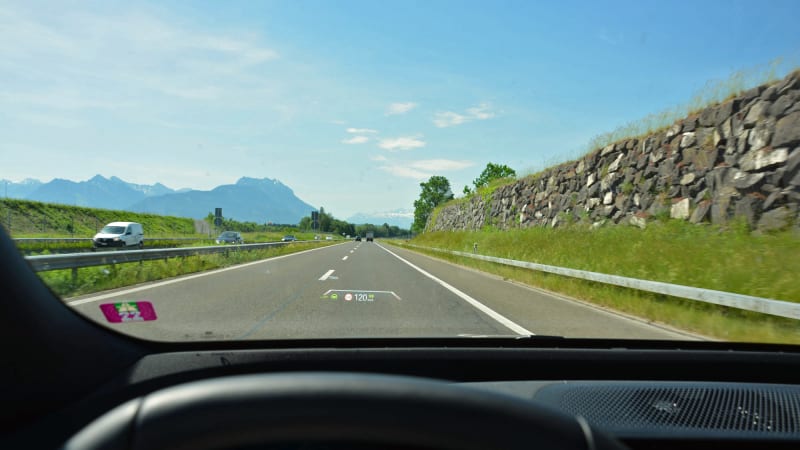 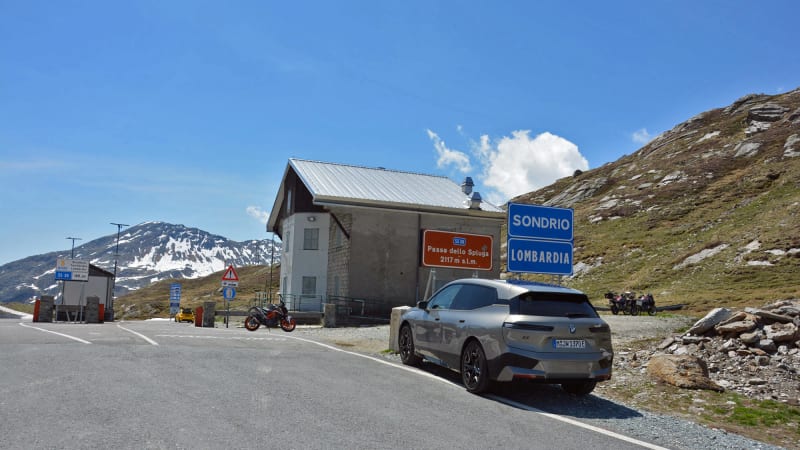 The Alps appear on the horizon almost like a mirage, with snowy peaks poking through the clouds. This huge mountain range once believed to be indomitable (locals feared that dragons lived at the summits well into the 18th century) is now a source of excitement for hiking and driving enthusiasts alike. With the Sport mode engaged via the touchscreen to unlock the drivetrain’s full output, the iX M60 feels markedly different than the xDrive50 (which I drove in the Alps as well). It leans much less when going into a turn, it’s far quicker coming out of it, and the four-wheel-steering system makes it feel more nimble than it actually is. It’s ultimately closer to the M brand’s spirit.

On a secondary but significant level, driving an EV up a mountain pass is the automotive equivalent of reading a thriller. First, a bout of panic sprouts in your chest as you watch the range drop at a frighteningly quick rate. Wild thoughts ricochet inside your head: “What are the odds that there is a charging station at the top? Maybe someone has a generator? What if all I find is a household outlet? Oh, hell, Hannibal survived here with a herd of elephants in 218 BC, I can probably keep myself alive for a night or two.” But then, past the summit, the brake energy recuperation system saves the day. There are two settings to choose from in the iX, normal and the more aggressive “B.” Selecting that dials in enough recuperation to allow for one-pedal driving. On your way down, you rarely need to touch the brake pedal and the drivetrain generates electricity as fast — if not faster! — than it was losing it on the way up. Phew.

While the standard iX carries a base price of $84,195, including the $995 destination charge, the iX M60 starts at $106,095. Both prices exclude any government rebates. Both are compelling options for those in the market for an electric SUV. They offer a spacious interior, a usable amount of driving range, and an intuitive suite of technology. They satisfy both the i and the X in their names. But for the iX M60, what about the M?

Viewed through the M lens, it’s an intriguing addition to the range. It doesn’t feel like a typical M (or M Performance) car but it also doesn’t not feel like an M car. It’s a distinctly different flavor of M-ness. And, at the same time, it’s also a distinctly different flavor of i-ness than the iX xDrive50; it’s faster and generally sportier without going overboard. It seems to know what it is. No identity crisis here.

Electric car charging at home with no driveway: options, rules and tips

Can Europe’s aerospace capital reinvent itself as a future mobility hub?