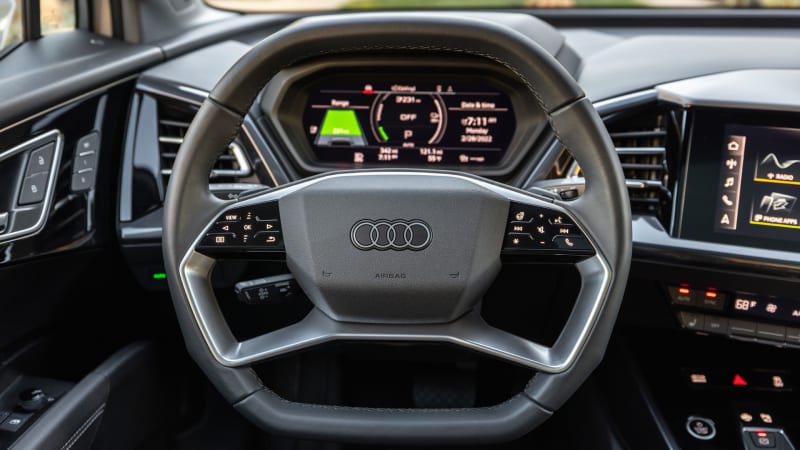 Audi has a bold plan to have an all-electric vehicle lineup by 2033 and its next step toward carbon neutrality is the Q4 E-Tron SUV. It’s smaller than the midsize E-Tron SUV that was introduced in 2019 by about a foot, nose-to-tail, and weighs about 1,000 pounds less. It also costs $22,000 less than that E-Tron and in its base trim, has a longer range. What a difference a few years makes.

Stepping up to the Q4 50 E-Tron Quattro will cost you another $5,000 and gets you a second motor driving the front wheels with a combined output of 295 hp. That shortens its 0-60 mph time to 5.8 seconds and increases top speed to 112 mph. Range drops to 236 miles, though.

At the top of the range is the Q4 Sportback E-Tron for $57,995. Picture above, this model has a sloping rear roofline for a sportier silhouette with identical power and performance specs as the Q4 50 E-Tron. Range increases slightly to 242 miles, thanks to the more aerodynamic shape.

All of these Q4 E-Tron models have an 82-kWh lithium-ion battery pack mounted in the floor, which is the same array found in the related Volkswagen ID.4, which starts $11,205 less than the base Q4 E-Tron. Audi estimates a full charge on a level 2 charger will take 7.5 hours. DC fast charging is capped at 150 kW and should take 36 minutes to get from 5% to 80% capacity.

After an afternoon driving the Q4 50 E-Tron on some epic southern California roads, we’re left sensibly impressed. Acceleration is more than adequate for the vast majority of drivers. It won’t pin you to the seat if you floor the pedal. Instead, it’s decisive, smooth, and very easy to manage. Once underway, there is more road noise than we expect, with a subtle rumble and low frequency thuds that some EVs exhibit since there’s no gas engine to mask it. Handling is good enough to have fun with, yet the ride quality remains pleasantly calm. It certainly feels more agile than its 4,800-pound curb weight would suggest. 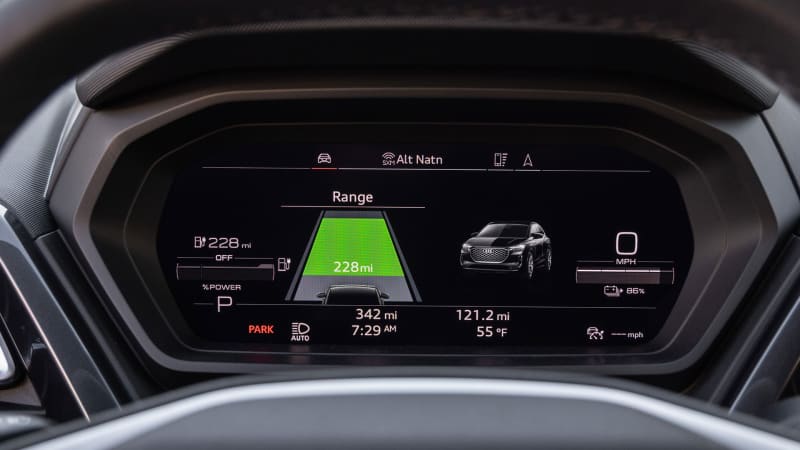 Slowing the Q4 E-Tron is different from most other EVs since Audi is so far resistant to enable one-pedal driving. You have steering wheel paddles that adjust the amount of regeneration when you lift your foot off the accelerator, but it’s limited to three stages and each feel equivalent to a half-gear downshift. In the highest setting, it slows the vehicle almost as much as a typical one-pedal EV, but it will not bring it to a complete stop. You’ll slow to 3 mph, at which point, you’ll need to press on the brake pedal. If you release pressure on the brakes, the system will reset and you’ll need to tap the pedals again.

There is a new “B” drive mode that keeps you in maximum regeneration mode and feels as though it slows the Q4 E-Tron more quickly. It’s accessed by tapping the “gear” selector once and it will remain active until you tap the selector again to get back into the standard drive mode. Audi explains the lack of one-pedal driving as a bridge to those who are new to EVs. On one hand, we can understand giving new EV drivers familiar controls that won’t force them to adapt to a new driving style. On the other, what if those new EV drivers like that new driving style? Their new car will never give them the option. We think it should. 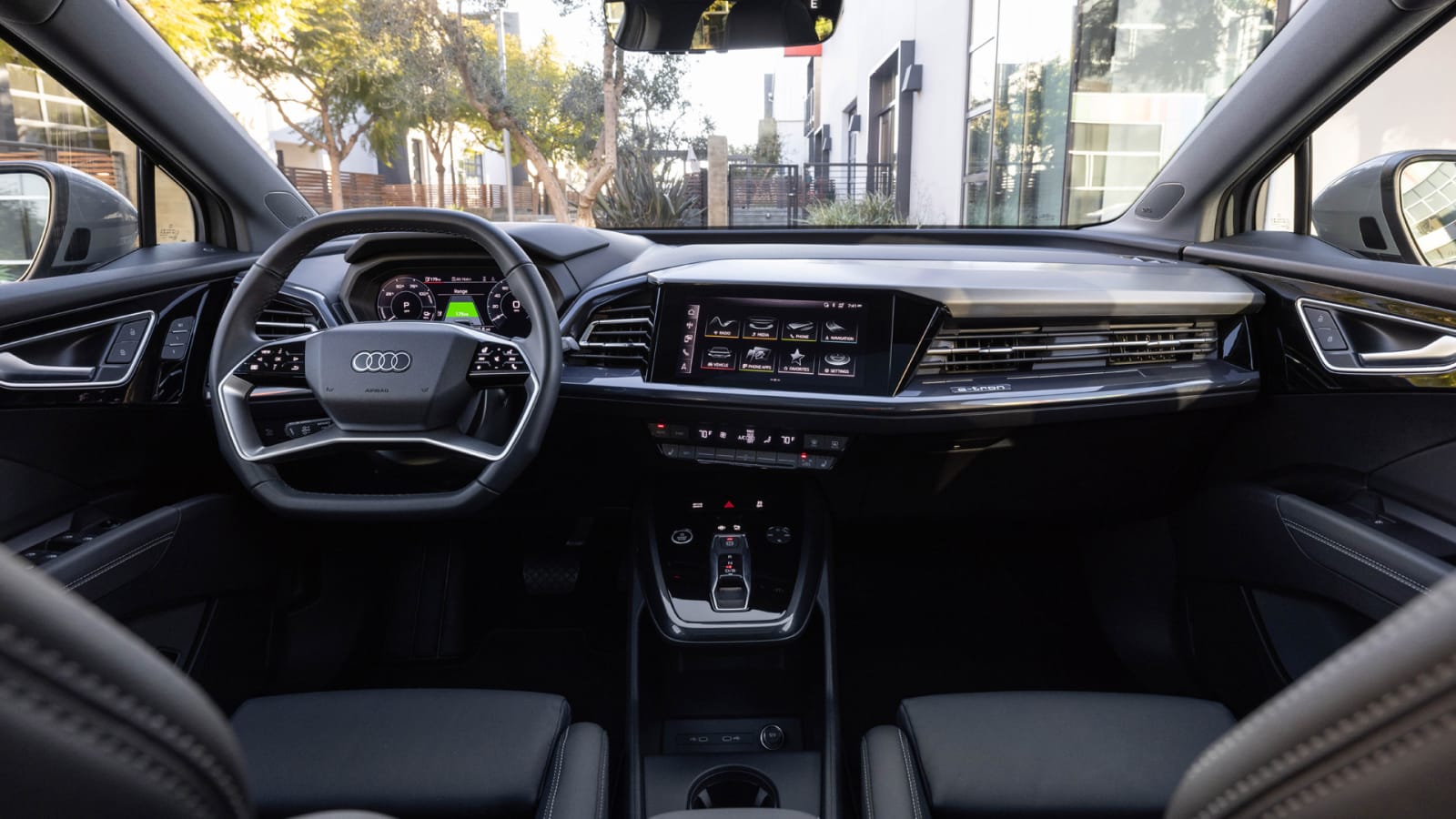 The Q4 E-Tron’s interior features a bold faceted motif, notably convenient storage, and modern technology features that are easy to use. Cutting through the dash is an angular metallic slash that frames the infotainment touchscreen and air vents. Below the standard 11.6-inch touchscreen that’s canted toward the driver are a bank of physical climate control buttons that are easy to operate with barely a glance.

The center console protrudes from the dash like a small piano-black pedestal and contains the gear selector, the start/stop button, and a few secondary controls. Underneath is a rubberized tray, USB ports, and a wireless charging pad. That pad features a spring-loaded clip to keep your phone in place and can fit a Max-sized iPhone with a rather thick bumper case. You don’t have to be particularly careful about how you place a phone, either, as we received confirmation the charger was activated without having the phone perfectly centered.

The cupholders, armrest bin, and door pockets are all moderately sized and provide plenty of storage for personal items. As an added bonus, there’s a new drink bottle pocket in the door, just in front of the window and mirror controls. Not only is it convenient to have it placed there, but it can securely hold a liter-sized bottle with no rattling. 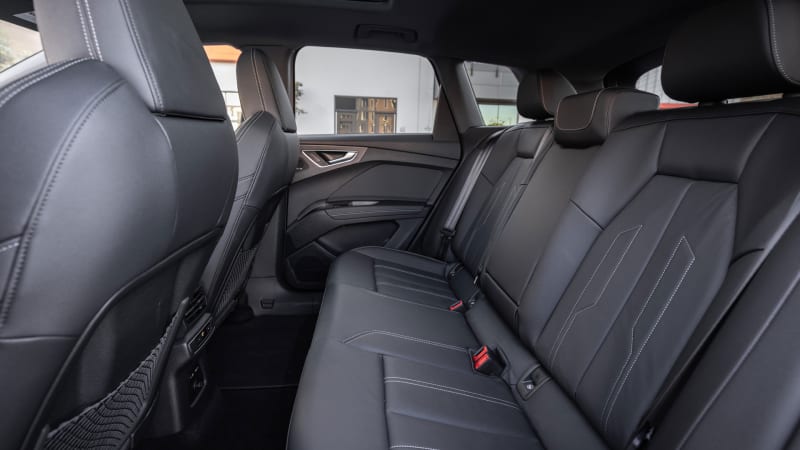 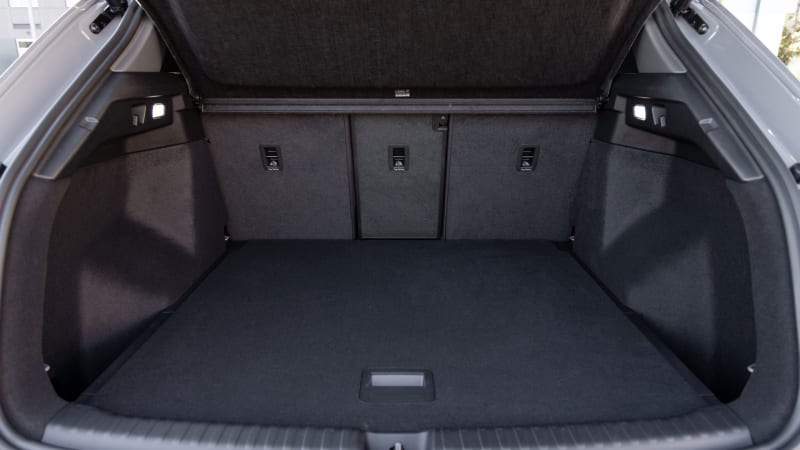 The front seats offer good overall support, but cushioning is noticeably firm and on a warm day, they can be stifling. Ventilated seats are not available, sadly. The rear seats are spacious enough to accommodate adult passengers, but the Sportback model reduces headroom by 1.3 inches. Behind those seats, you can squeeze as much as 24.8 cubic-feet of cargo. With the seatback folded flat (pictured above left), that volume expands to 53.1 cu-ft. The Sportback defies convention and somehow offers more space: 26.1 cu-ft and 54.4 cu-ft, respectively. Underneath the cargo floor is a shallow compartment that can hold the included 14.5-foot NEMA 14-50 charge cable, which is good since there’s no frunk.

After our experience with the Audi Q4 E-Tron, we’re left with very positive impressions. It costs quite a bit more than the related VW ID.4 but more than justifies that premium with a significantly nicer interior and easier-to-use controls. More direct competitors include the Volvo XC40 Recharge and Mercedes-Benz EQB. The XC40 Recharge starts just above $54,000 with a range estimate of 223 miles. Cargo capacity and interior quality are comparable to the Q4 E-Tron, but the Volvo is a full second quicker to 60 mph. We’re still not sold on the Google-based infotainment system, though.

The Mercedes EQB is based on the gas-powered GLB and has an estimated range up to 243 miles and starts just past $55,000. It’s not as sporty as the Audi and some hard interior plastics make it feel more entry-level than full luxury, but its large maximum cargo capacity is more versatile and it’s available with a third row of seats.

If you’re new to EVs, the 2023 Audi Q4 E-Tron represents a gentler transition both in terms of how it drives and in regard to styling that can easily be mistaken for an internal combustion vehicle. Sure, we wish it had a one-pedal drive option, but as good as the Q4 E-Tron is, that’s a small sacrifice to make.