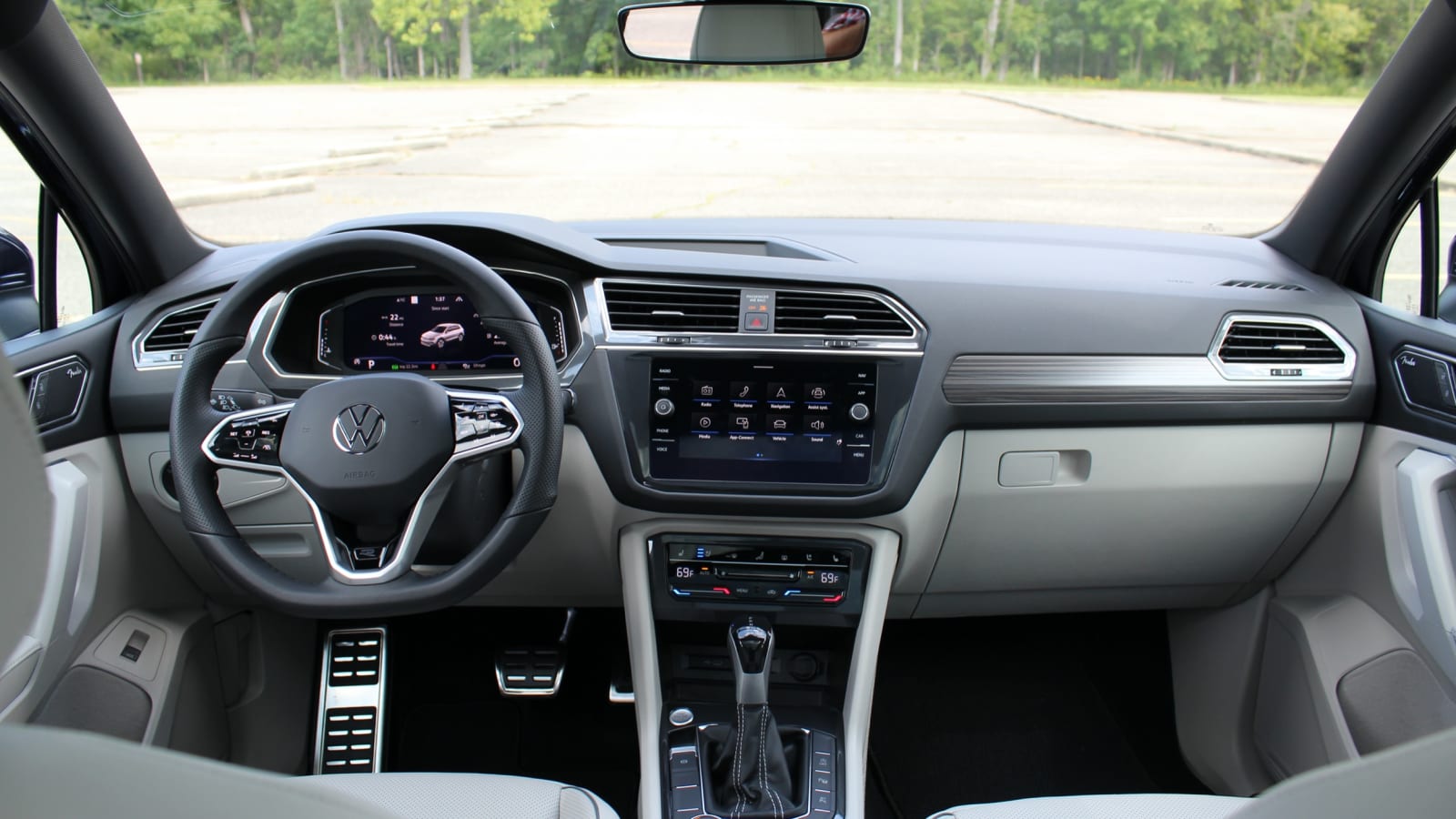 CHELSEA, Mich. — As compact crossovers remain hot sellers, it’s no surprise that the Tiguan is VW’s most popular model. Not just in the SUV-crazy United States where it’s expected to move 120,000 this year, but worldwide. To keep that momentum going in the face of competitors like the Toyota RAV4 and Honda CR-V that have seen significant updates since the current-generation Tiguan was launched for 2018, Volkswagen has given its compact crossover a mid-cycle update. In keeping with the one already applied to Euro-spec cars, the 2022 Volkswagen Tiguan includes an exterior facelift, some new technology and a reconfigured trim lineup.

The updated looks are the first thing you notice here, though they’re nothing too dramatic. Up front is a new bumper and standard LED headlights, and the new VW logo makes an appearance as well. The top SEL R-Line trim gets piano black and chrome inserts on the bumper, in addition to the more upscale signature lighting. “Lighting is the new chrome,” VW product specialist Brandon Ward told us. As such, the SEL R-Line also gets a horizontal light bar across the grille. The rear also gets standard LED lighting and a new bumper. The R-Line has a chrome strip that extends along the lower portion of the side doors and continues across the rear bumper. The R-Line also gets flashy chrome exhaust tips. The rear Tiguan badging has been relocated to just below the VW emblem in the center of the liftgate. There are also new wheel designs across trim levels, ranging in size from 17 to 20 inches. Oryx White and Kings Red debut as new paint choices.

Inside, the Tiguan receives the Volkswagen Digital Cockpit — a digital instrument cluster that replaces the old analog gauges — in either 8- or 10-inch versions. We especially liked the look and customization of the larger screen in the SEL R-Line we tested (pictured below), though the smaller unit’s simplicity makes it easier to navigate. The SE trim and up get an updated infotainment system complete with wireless Apple CarPlay and Android Auto, along with a wireless phone charger. Despite these new features, though, it does not have Volkswagen’s latest interface. That would be the deeply frustrating system found in the ID.4 and GTI. The Tiguan is better off without it. 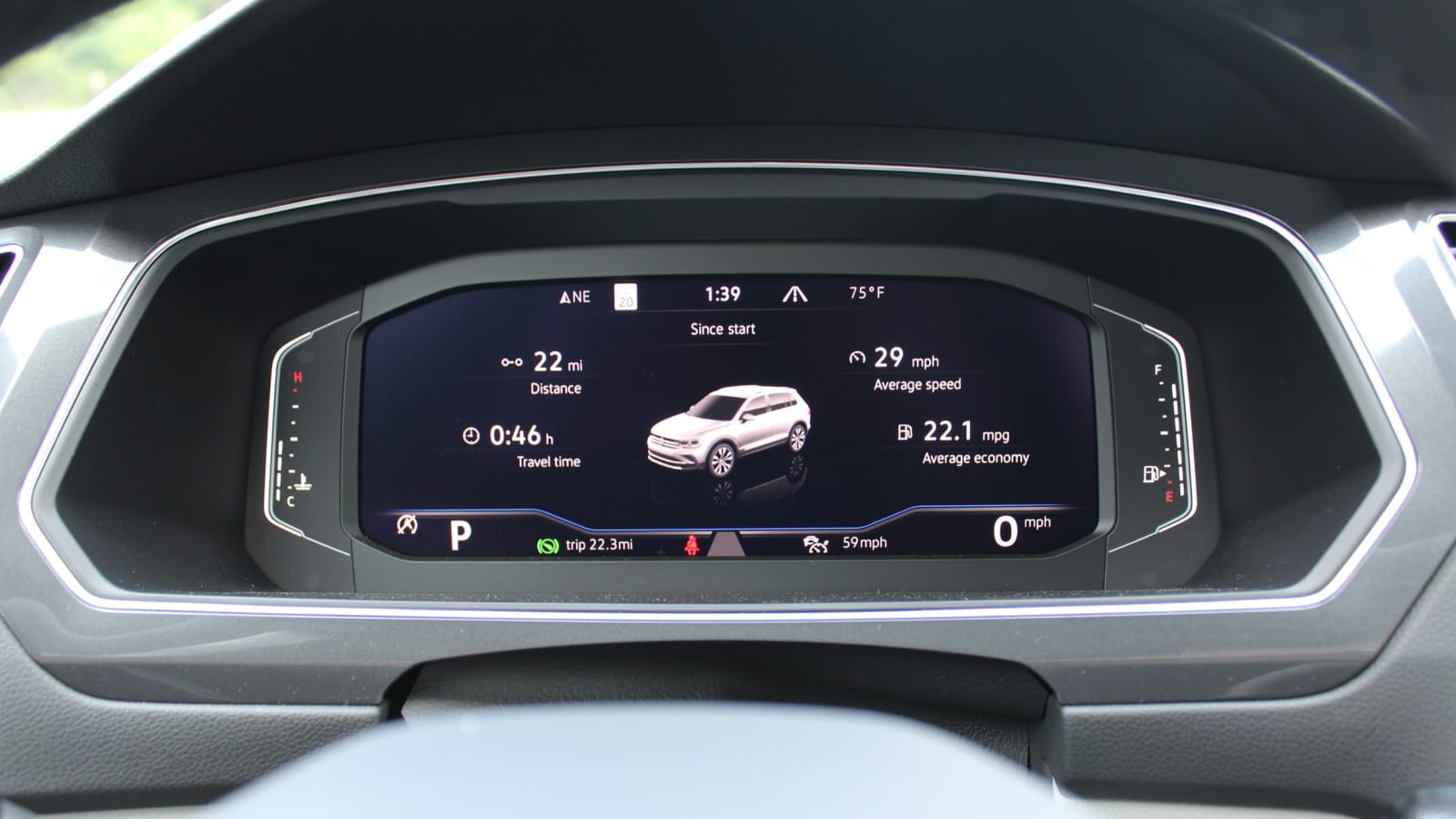 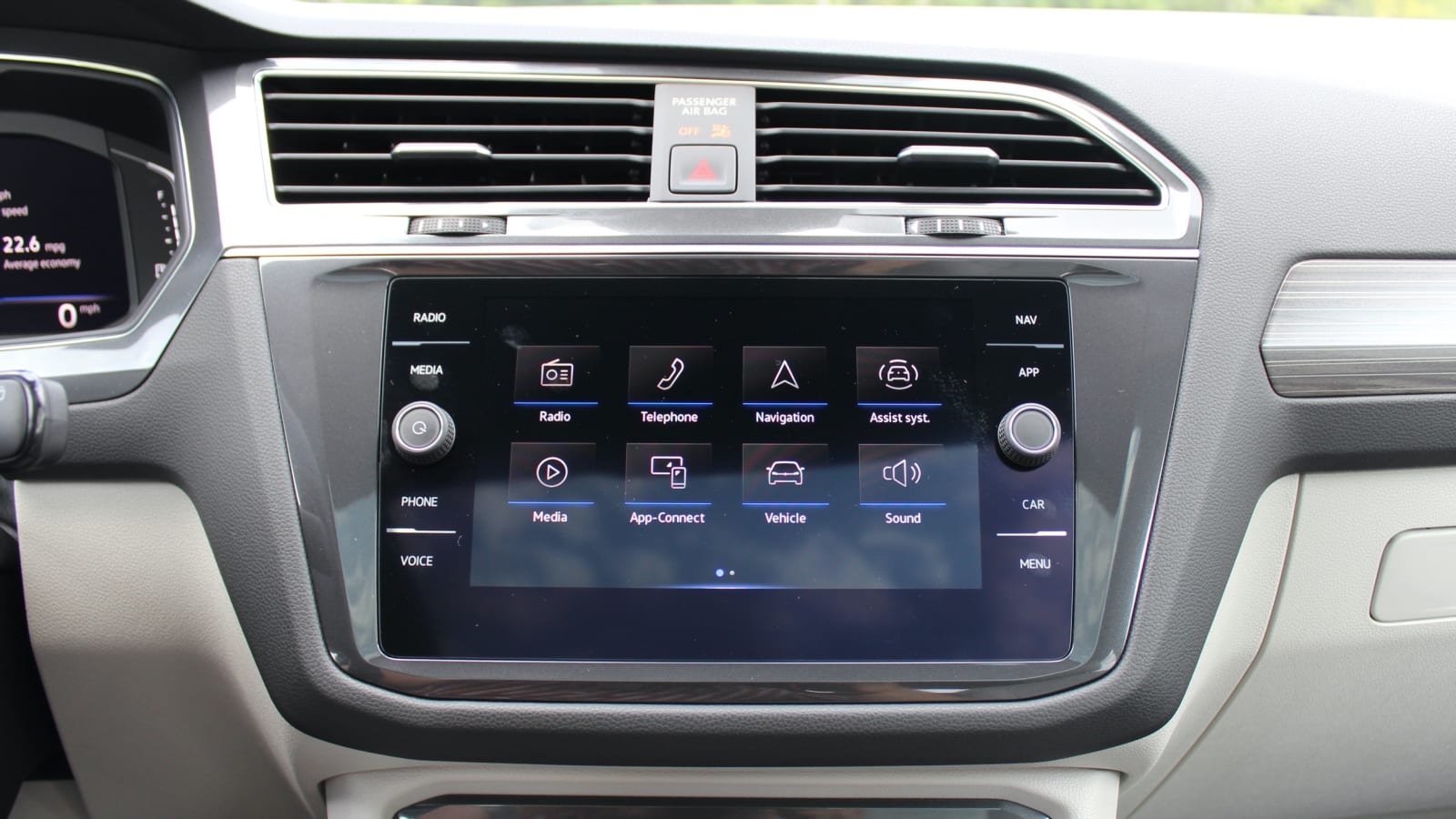 Also available for the 2022 model year is Volkswagen’s IQ.Drive driver assistance suite. While front collision warning and braking, blind-spot monitoring and rear traffic alert are all standard, IQ.Drive — a $895 option for the S and standard in other trims — adds adaptive cruise control with stop-and-go-capability, lane keeping assist and emergency assist (which attempts to wake an unresponsive driver before engaging hazard lights and bringing the car to a stop). Additionally, auto high beams, parking steering assist and road sign recognition are available.

Flashy tech can often help a car seem more modern or even futuristic, and automakers seem to love to add party tricks to the most touched user interfaces — for better or worse. When we heard about the new slider controls of the “Climatronic Touch” climate interface, we had flashbacks to the fidgety touch controls of the VW ID.4 and GTI. Thankfully, in the Tiguan, they’re limited to the climate control system, and are easy to use (we’d still prefer hard buttons for adjusting temperature, however), and much better than the old-school manual dials forced upon us in the S trim. You can also find touch controls on the Tiguan’s steering wheel. These don’t take any extra thought or attention to use compared to the traditional buttons found in the S, thanks in part to the haptic feedback they provide.

The new Tiguan adds some additional available features to help justify its price increase. For those of you in cold climates, you’ll be happy to learn that heated seats are now standard across all trim levels. A heated steering wheel and ventilated seats are also available. To help set the mood, the R-Line models get 15-color interior ambient lighting, though our daytime drive didn’t give us the opportunity to fully appreciate it. The Fender sound system in the SEL R-Line is noticeably better than the standard audio. There are also a number of different seating surfaces ranging from a robust, textured cloth in the S, to a leatherette in the SE models, to actual leather in the SEL R-Line.

Things remain mostly the same under the Tiguan’s hood for the 2022 model year. The sole engine option is a turbocharged 2.0-liter inline-four producing 184 horsepower and 221 pound-feet of torque. An eight-speed automatic transmission directs that power to either the front wheels or the 4Motion all-wheel-drive system available on all trims. There are no shift paddles on the steering wheel, but you can select your own gears using the manual mode on the gear lever: Push forward to upshift, pull back to downshift (which is in opposition to our instincts, but one can eventually get used to it). Interestingly, fuel economy numbers improve slightly from the previous model year, thanks to some tuning updates. Front-drive models get 23 miles per gallon city, 30 mpg highway and 26 mpg combined, compared to 23/29/25 mpg for 2021. The S and SE 4Motion models get 22/29/25 mpg, up from 21/27/24. The R-Line trims now have different figures, coming in lower at 21/28/24, presumably because of its stickier Pirelli Scorpion Zero tires.

On the road, the basic drive experience is largely indistinguishable from before. The 4Motion model we started our day in feels hesitant to leap of the line. After a moment of waiting, though, you feel the initial burst of torque as the Tiguan comes to life. It’s not particularly quick, but it’s not slow either, and we don’t really see a need for more power, at least at Michigan’s elevation with its relatively flat landscape. The engine is more eager to motivate the wheels of the front-drive version, though the S trim we tested lacked the grip of the all-wheel-drive Tiguan SEL R-Line and its sticky Pirelli rubber. This resulted in wheelspin — and the ensuing intervention of traction control — that seemed to delay the car’s launch as much as with the 4Motion-equipped SEL R-Line.

Once under way, the Tiguan isn’t as boring to drive as its segment suggests. It’s surprisingly light-footed on some of the area’s more dynamic roads. Despite the light steering feel with on-center numbness consistent with most Volkswagens, we quite enjoyed flinging the Tiguan from one corner to the next as it traced the undulations in the pavement. There’s a bit of softness in the ride, which helps to filter out some of the harder bumps along the way, but it doesn’t get in the way of the Tiguan’s ability for some light frolicking.

There was also some housekeeping done for 2022 as Volkswagen pared down the number of available trims from five to four. Gone is the plain, old SEL, and what remain are the S, SE, SE R-Line Black and SEL R-Line. Each can be had with front-wheel drive or 4Motion all-wheel drive, apart from the SEL R-Line, which comes all-wheel drive as standard. The Tiguan still offers a third-row seat, but it’s not available in the all-wheel drive versions (and it’s very cramped, and should be reserved for your least favorite children). With the lineup shuffle comes revised pricing, as well. The 2022 Tiguan S starts at $27,190, including the $1,195 destination fee, which represents a $750 price increase over the 2021 model. The SE, at $30,690, is a more significant $2,100 price bump over the outgoing model, while SE R-Line Black jumps $2,895 for an MSRP of $33,490. For those three lower trims, adding 4Motion costs $1,500 across the board. The good news is that the Tiguan SEL Premium R-Line’s $37,790 price tag is a $2,500 decrease from the previous year. 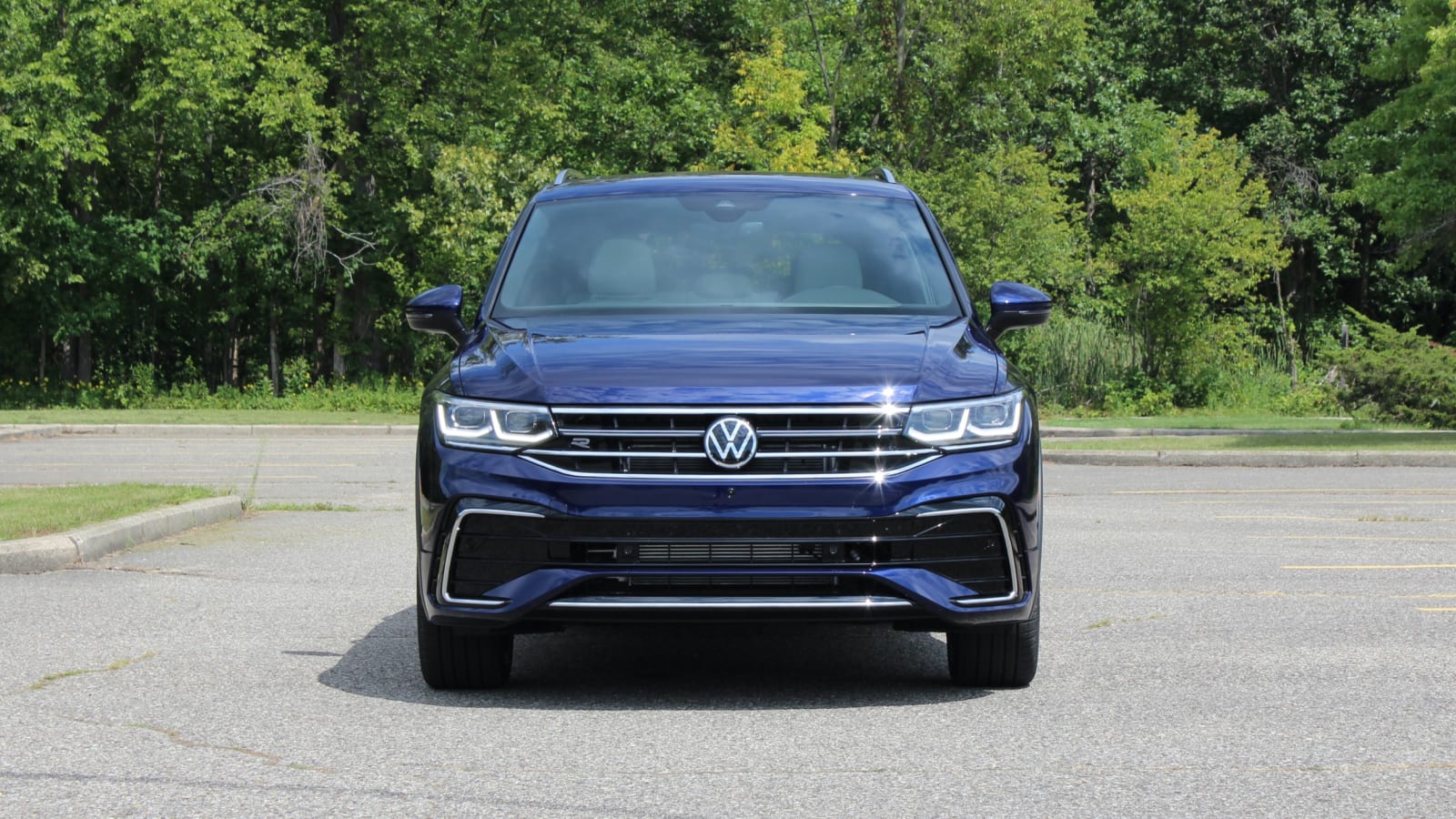 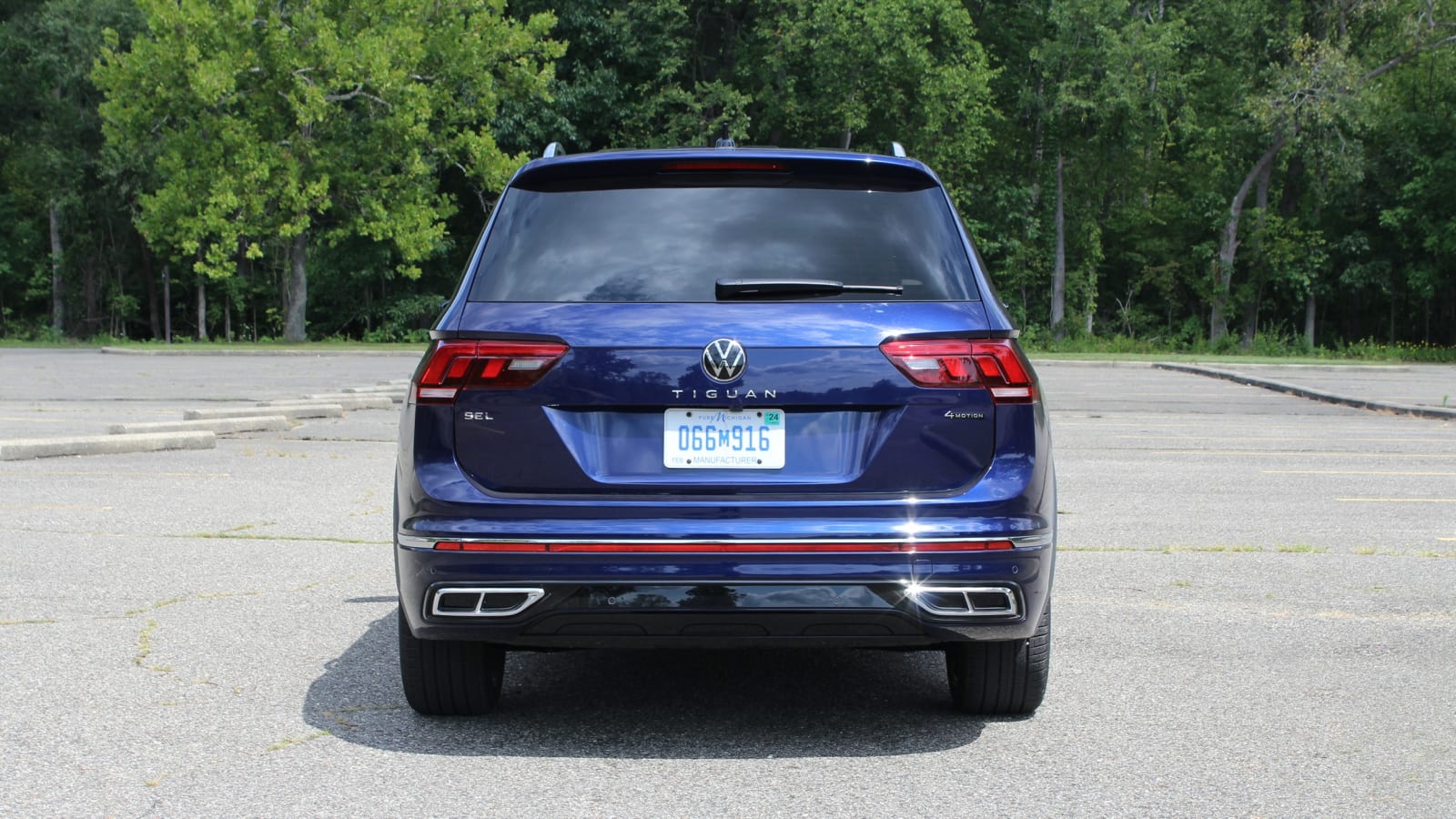 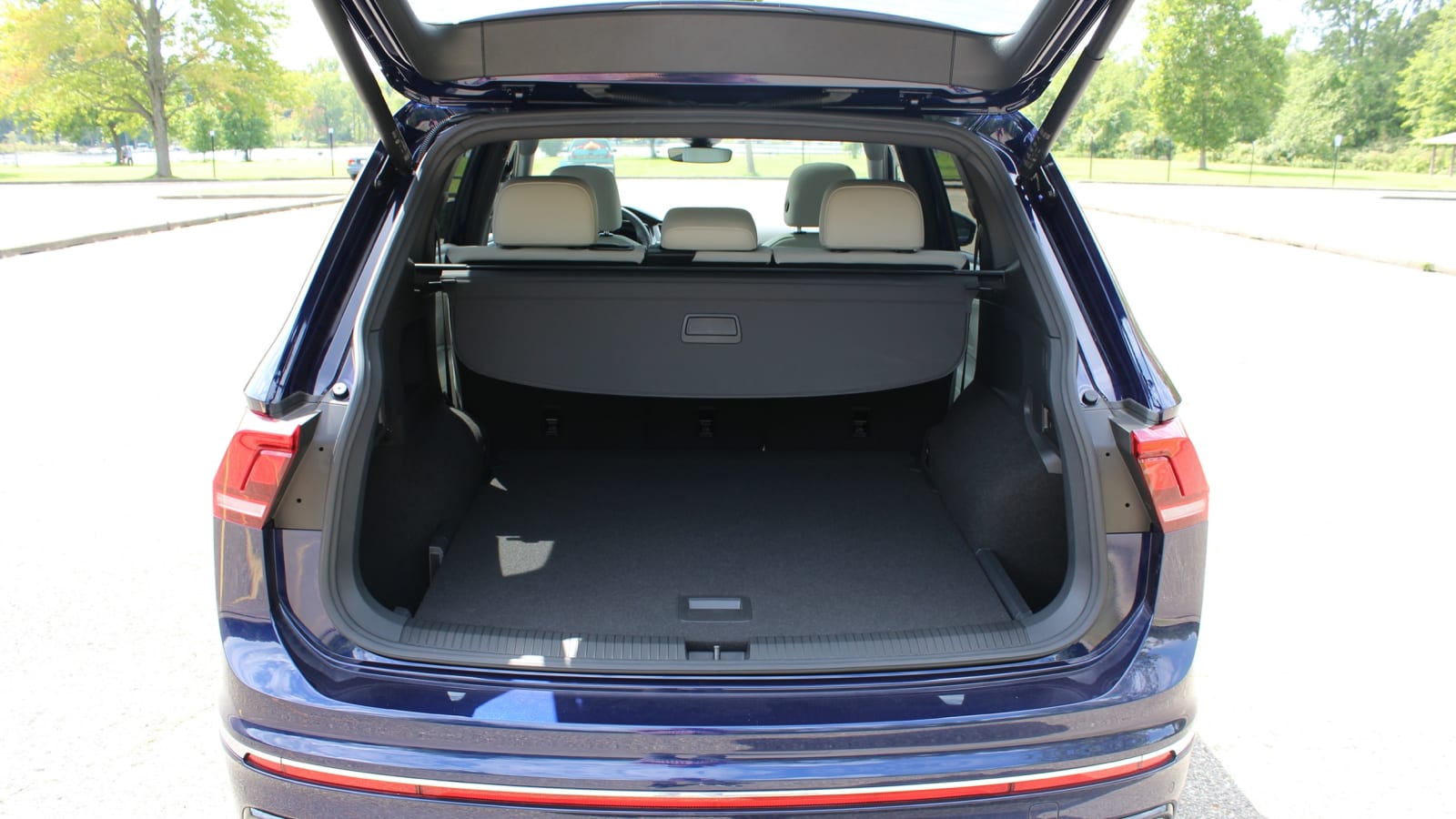 Volkswagen expects the 2022 Tiguan to arrive in dealerships in mid-October. Will the semiconductor shortage affect that? The chip crunch is an ongoing issue, Volkswagen admits, but its plant in Puebla, Mexico, is still up and running since its previous stoppage. Volkswagen also told us it is prioritizing this high-volume segment. Tiguan is, after all, its biggest crowd-pleaser.

Here’s the thing, though. There’s another small Volkswagen we think is better suited to please those crowds. The new Taos may be slightly smaller, and doesn’t offer a third row of seating, but it’s still incredibly spacious inside. In fact, Taos has a bigger, more functional interior than the previous-generation Tiguan. It’s also less expensive and more fun to drive than the 2022 Tiguan and is offered with most of the same features, including the standard Digital Cockpit and available 10-inch infotainment system.

Actually, there is yet another Volkswagen you should consider. If you’re ready to step into the future, check out the VW ID.4. This all-electric crossover offers smooth, immediate power delivery and sharper handling than the Tiguan. It has up to 260 miles in driving range, and you can refuel it on the cheap at home. It’s currently only available with rear-wheel drive, but an all-wheel-drive version is coming soon. It doesn’t have quite as much cargo space or a third-row option, and as we mentioned, its interior controls can frustrate, but the positives largely outweigh the negatives. And though more expensive, starting at $41,190, it’s well equipped and eligible for the $7,500 federal tax credit.

The lingering question is whether those other options will take a bite out of the Tiguan’s pie. How many of those same 120,000 people who took home Tiguans in 2021 will instead choose a Taos or ID.4 in 2022? Either way, the revised Tiguan is indeed improved, and there’s more than enough pie to go around. With three viable compact crossover options, there’s something for everybody.