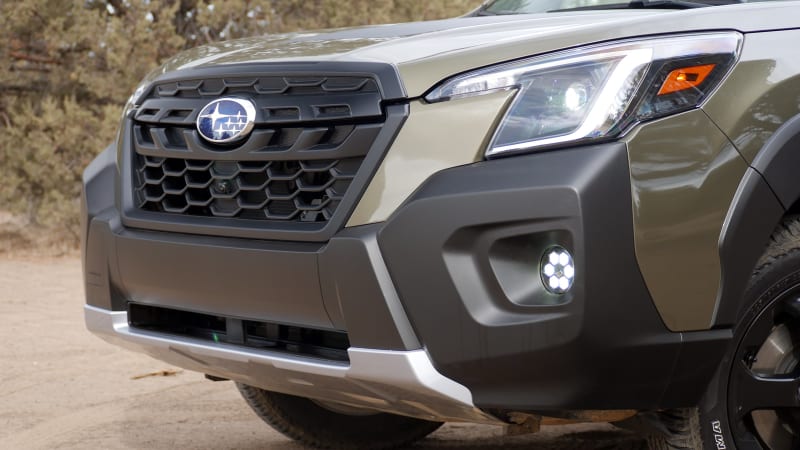 POWEL BUTTE, Ore. — “It’s about the journey, not the destination.” This has long been a rallying cry for enthusiasts everywhere who see cars as more than simply the means of traveling from point A to B. It’s particularly apt for off-roading enthusiasts. For them, of course, it’s about the journey – there will almost certainly be a better way of getting from here to there than at 5 mph up a boulder-strewn hill.

The 2022 Subaru Forester Wilderness is not that type of off-roader. It ultimately makes the journey easier, more comfortable and less nerve-wracking, but its owner is almost certainly more concerned with the destination. Specifically the camping spot, the hiking trail, the alpine lake, etc. And this isn’t some marketing strawman or a dream scenario for owners who’ll really only ever take it to Whole Foods.

People really are going outside more. According to data from Statista and provided by Subaru, about 17 million more people hiked in 2019 than they did 10 years prior, and it’s hard to imagine those numbers not going up in the past two years. Furthermore, the number of people camping had already been increasing before the pandemic, and data from 2020 show that 21% of campers did so for the first time.

And it probably won’t surprise you that among people who frequent the great outdoors, the Subaru Forester is one of the top choices. Subaru says 36% of Forester owners use their vehicles to carry outdoor equipment, which is tops in the industry, and nearly 25% of them go camping – only the Jeep Cherokee is higher, and barely so. The segment average is around 17%. And for those compact SUV shoppers who actually go off-road, the Forester is again second only to the Cherokee, with about 17% of owners, or double the segment average.

The new Forester Wilderness would be Subaru doubling down on these trends and the brand’s existing success. The Forester already has more ground clearance at 8.7 inches than everything in the segment other the Jeep Cherokee Trailhawk, which matches it (the other versions have less). The Wilderness raises the floor by a half-inch, going up to 9.2 inches by adjusting the actual coil spring and damper lengths (as opposed to the spacers typically used in aftermarket lifts). Now, this isn’t quite as high as the 9.5 inches boasted by the Subaru Outback Wilderness, but the Forester was limited by production issues – basically, if it got any higher, it would run into some piece of equipment in the factory.

The approach and departure angles relative to the Outback speak to its shorter overhangs, but there’s more to the gains than simply the suspension height increase. The lower front fascia was reshaped specially for the Wilderness to come up slightly in the front and at the corners. There’s also an aluminum skid plate, should that approach angle not be wide enough. Other visual differences include extended frontend bumper cladding, a unique grille with the Wilderness-exclusive forward camera, hexagonal fog lights, larger fender flares, a textured black trim piece and body-colored roof spoiler at the rear, and signature gold trim pieces that pair with blacked-out lettering and Wilderness badges. 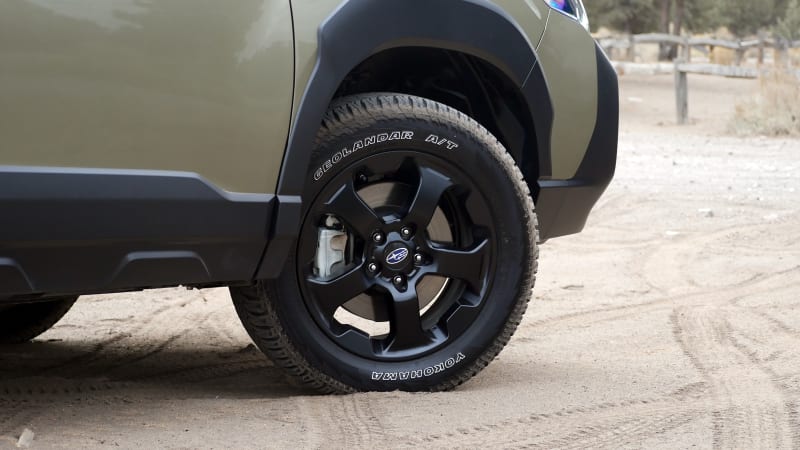 There are also the 17-inch black alloy wheels wrapped in Yokohama Geolander all-terrain tires, which we’re pleased to report pair far better in the Forester than they do in the Outback. In the latter, they conspire to create a squishy, delayed response off center that’s almost indicative of a JK Wrangler. It doesn’t exactly breed a lot of confidence on-road. Thankfully, there was no such delay detected in the Forester, and although steering response is hardly any Forester’s forte on-road, the Wilderness at least provides the drivability that Subaru says its customers expect from their SUVs (as opposed to traditional off-road enthusiasts who are willing to make sacrifices on pavement for extreme capability in the dirt). Subaru also says that despite the added height, the suspension tuning actually produces less body roll than the standard Forester, which is believable since it didn’t heave itself over into corners as the Outback does.

On-road comfort with the all-terrain tires does diminish slightly, but it’s akin to wearing harder-sole trail running shoes on pavement. It’s ultimately not that big of a deal. You feel the road a bit more, but the suspension is tuned as such that comfort is still very much maintained. More notable, however, is the Forester Wilderness suspension’s behavior off-pavement. We test drove it on dirt roads more than paved ones here in Central Oregon and came away wildly impressed with the suspension’s ability to sop up big and little bumps alike. Potholes that seemed likely to send sharp impacts into our spine were simply gobbled up by those long springs, the longer dampening compression stroke and the tires’ ample sidewall. We were not driving slowly, and the Forester gave us little reason to slow down, it was so adept at keeping us comfortable and ably responding to our steering inputs while slaloming around larger rocks and holes. It was quite fun, actually.

Realistically, this is the extent of off-roading most Forester Wilderness drivers are going to do when en route to a trail or campsite, but the thing is exceptionally good at it. That said, we did take the Wilderness on a slower, more technical dirt course Subaru set up for the first drive event. For such situations, the Wilderness includes two X-Mode off-roading modes, Snow/Dirt and Deep Snow/Mud, which optimize the engine output and CVT ratios, increase the engagement of the all-wheel-drive system, and alter the stability and traction control systems. X-Mode automatically shuts off when speeds go above 25 mph, but unlike in the past, it will automatically re-engage when speeds fall below 25 mph. 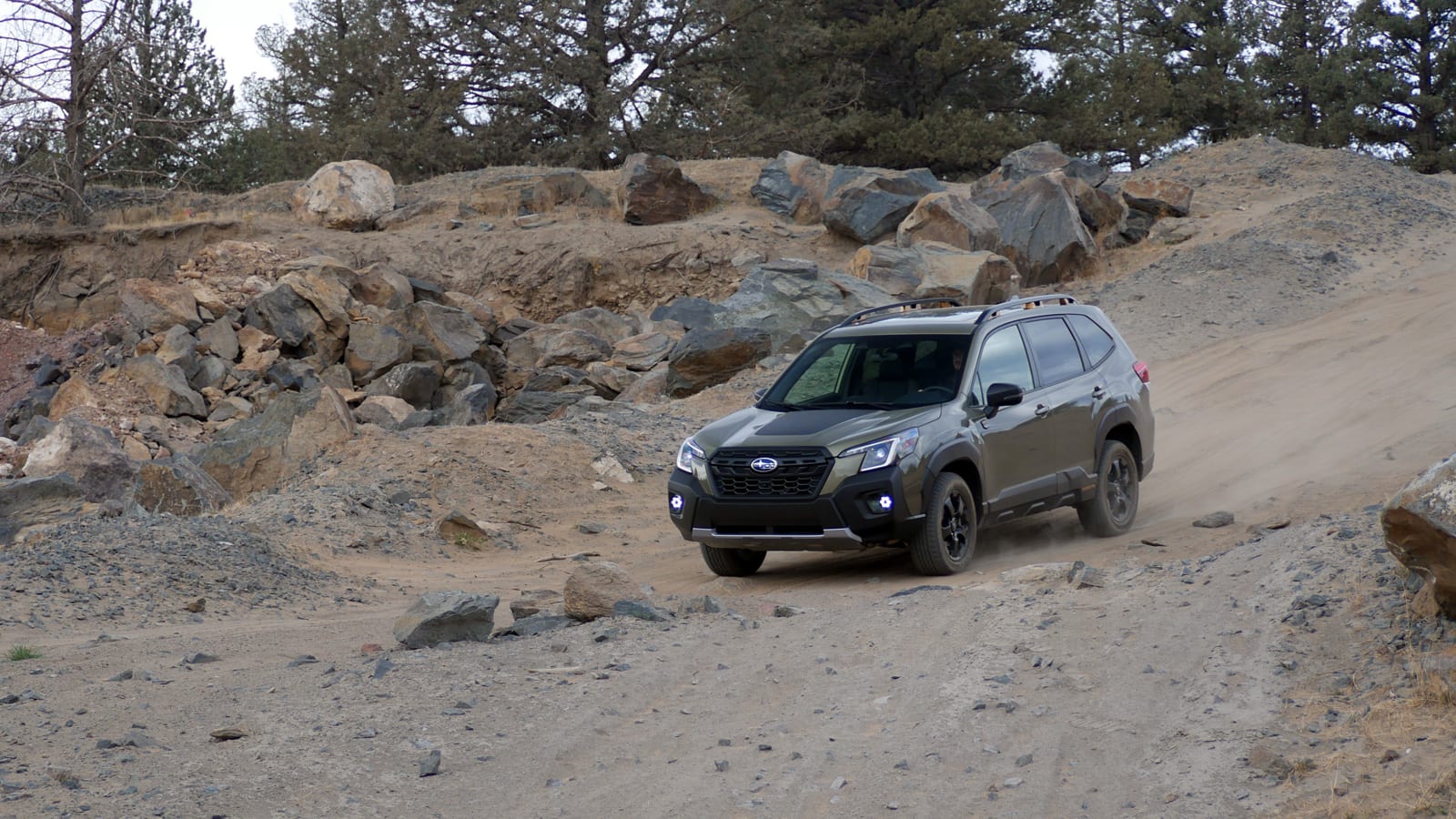 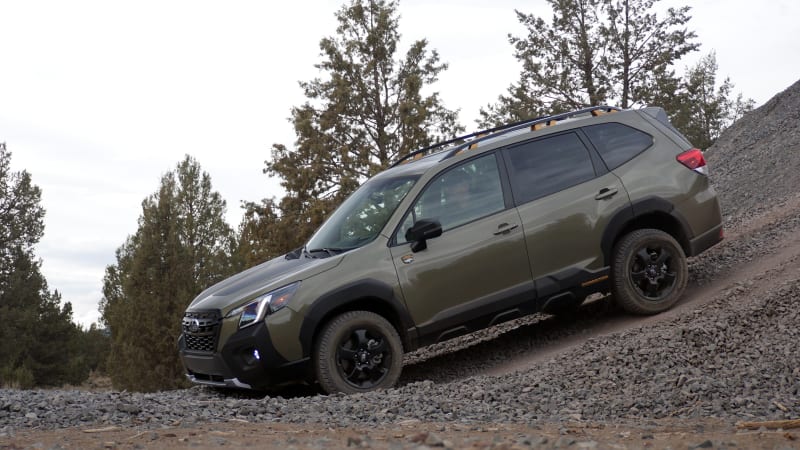 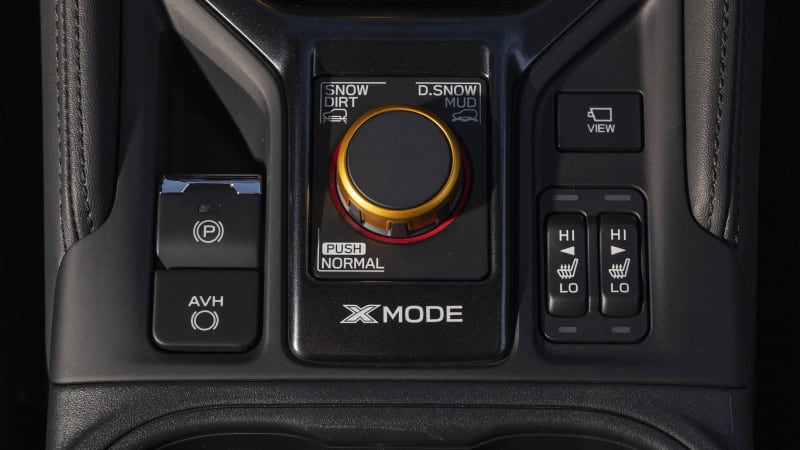 Hill-descent control is automatically engaged when an X-Mode is selected, and we were impressed by its performance. The first downhill we approached was a moderate grade, and between the brakes and altered CVT ratios creating a quasi low range, the car expertly controlled the descent in a natural, gradual manner, much as you would with the brakes. It didn’t tediously inch down at 2 mph and was basically akin to one-pedal driving. On a very steep downhill grade, hill-descent control performed the normal duty of automatically controlling the brakes with the usual ABS-like pulsing. In other words, it did the job without the driver having to separately engage hill-descent control, which is normally the case. This is off-roading for dummies, and speaking as one such dummy, it’s absolutely perfect for the “it’s about the destination” owners the Forester Wilderness should attract.

Besides altering the CVT ratios in X-Mode, every Wilderness gets a revised differential ratio of 4.11:1 versus 3.70:1 to provide more low-end torque, specifically off-road and in climbing situations. The CVT manual-mode ratios are also all lower than in other Foresters, ultimately resulting in the feeling of improved response. The engine it’s attached to carries over unchanged from other Foresters, a 2.5-liter boxer-four good for a modest 182 horsepower and 176 pound-feet of torque. It’s fine, but the calls for a turbo Forester will only grow louder with the Wilderness. The Cherokee Trailhawk comes standard with a 271-hp V6, while the Toyota RAV4 TRD Off-Road has 203 hp – although its naturally aspirated inline-four is similarly nothing to write home about.

The Wilderness’ different CVT ratios, tires and front-end aerodynamics also result in a 3-mpg drop to 26 mpg combined. That’s 2 mpg worse than the TRD Off-Road, but 3 mpg better than the 2.0-liter Ford Bronco Sport and 5 mpg better than the Cherokee Trailhawk.

Subaru did add a transmission oiler cooler, which doubles towing capacity to 3,000 pounds. That’s not exactly hefty, but it’ll be good enough for a small teardrop trailer. And for a different sort of outdoor sleeping arrangement, roof-mounted tents will be better accommodated on the Wilderness thanks to roof rails that are beefier and spaced slightly further apart. They can now support 800 pounds when parked, up from 700, or 220 pounds while in motion. The latter is up from 176 pounds, which was already the better than the rails of all the above-mentioned competitors. The basic Toyota 4Runner rails are only good for 120 pounds. 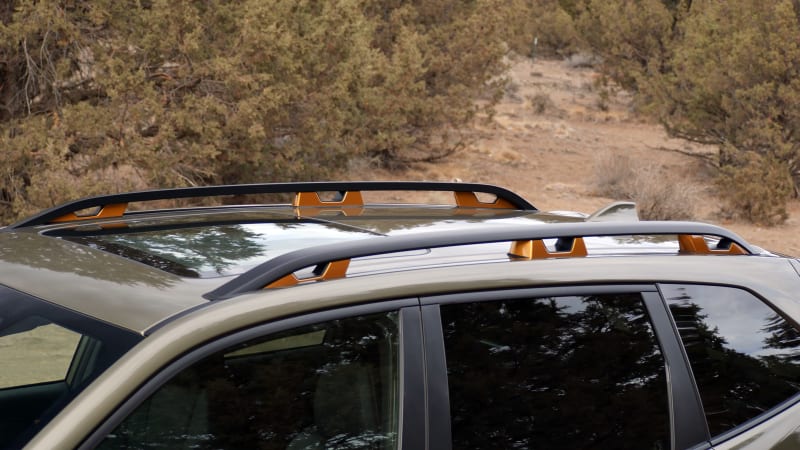 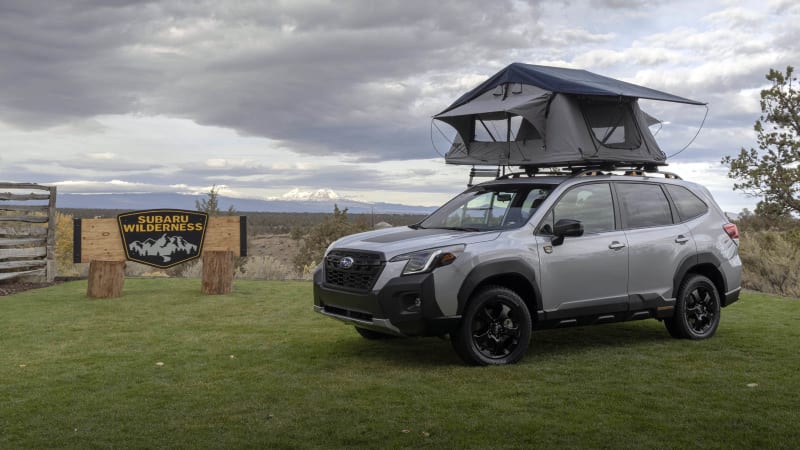 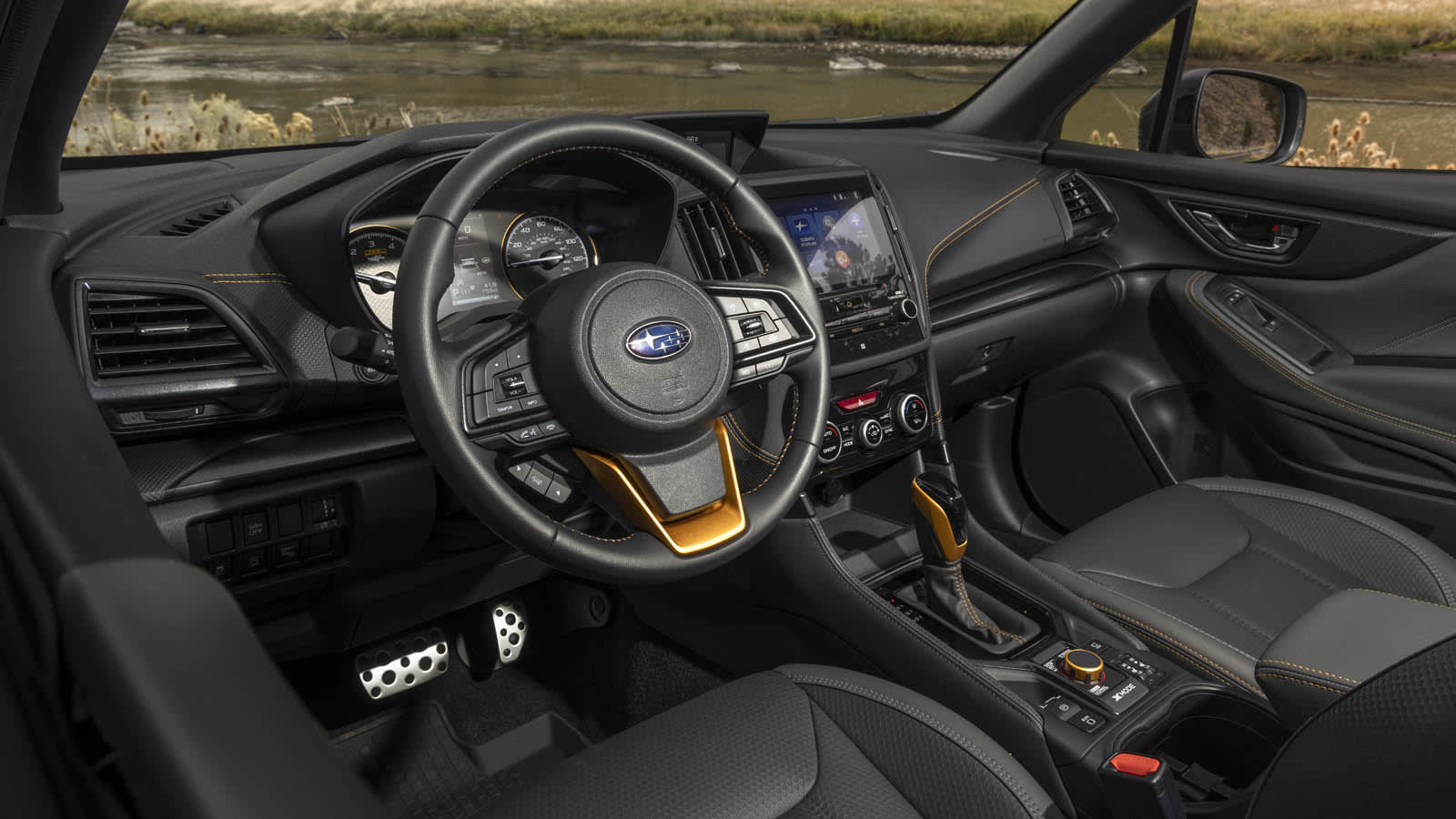 The same gold color that accents those roof racks is found strategically inside, including on the little Subaru Wilderness tags located on the doors and seats covered in water-resistant StarTex vinyl. Those also get a unique patterned texture and headrests embossed with the Wilderness logo. Other updates include the forward facing camera integrated into the dash-top display that’s a big help when approaching the crest of a hill or maneuvering around jagged rocks. Should you fail in the latter endeavor, the Wilderness is the only Forester to include a full-size spare. It’s the same Yokohama Geolander AT, too, though not white lettered.

Pricing starts at $33,945, including the $1,125 destination charge. That puts it roughly on par with the better-equipped Forester Limited, but about $3,000 below the range-topping Touring. Basically, it’s a mid-grade trim, unlike the pricier Cherokee Trailhawk and RAV4 TRD Off-Road. That price includes Subaru’s EyeSight suite of driver assistance tech, which has been recalibrated for the higher ride height (something rarely done with aftermarket lifts). Besides dealer-installed accessories, there’s only one option: a $1,850 package that includes a power liftgate, Harmon Kardon stereo and integrated navigation. The latter should be standard. When you’re out in the wilderness in your Wilderness, there’s a very good chance you’ll be without a cell signal (as we were throughout our test drive) and therefore without Google Maps or other phone-based nav systems.

That’s one of our few complaints about the 2022 Subaru Forester Wilderness, a small SUV that does exactly what a decent chunk of customers seemingly want and need. Compared to the Outback Wilderness, there’s less of a drivability degradation on-road, and its better approach/departure angles are ultimately bound to be more beneficial off-road. The Wilderness also looks a whole lot better than the standard Forester, which remains pretty dorky despite its own slight styling tweaks for 2022. So yes, the Forester Wilderness will do a great job of getting you to your destination, but the journey won’t be so bad, either.