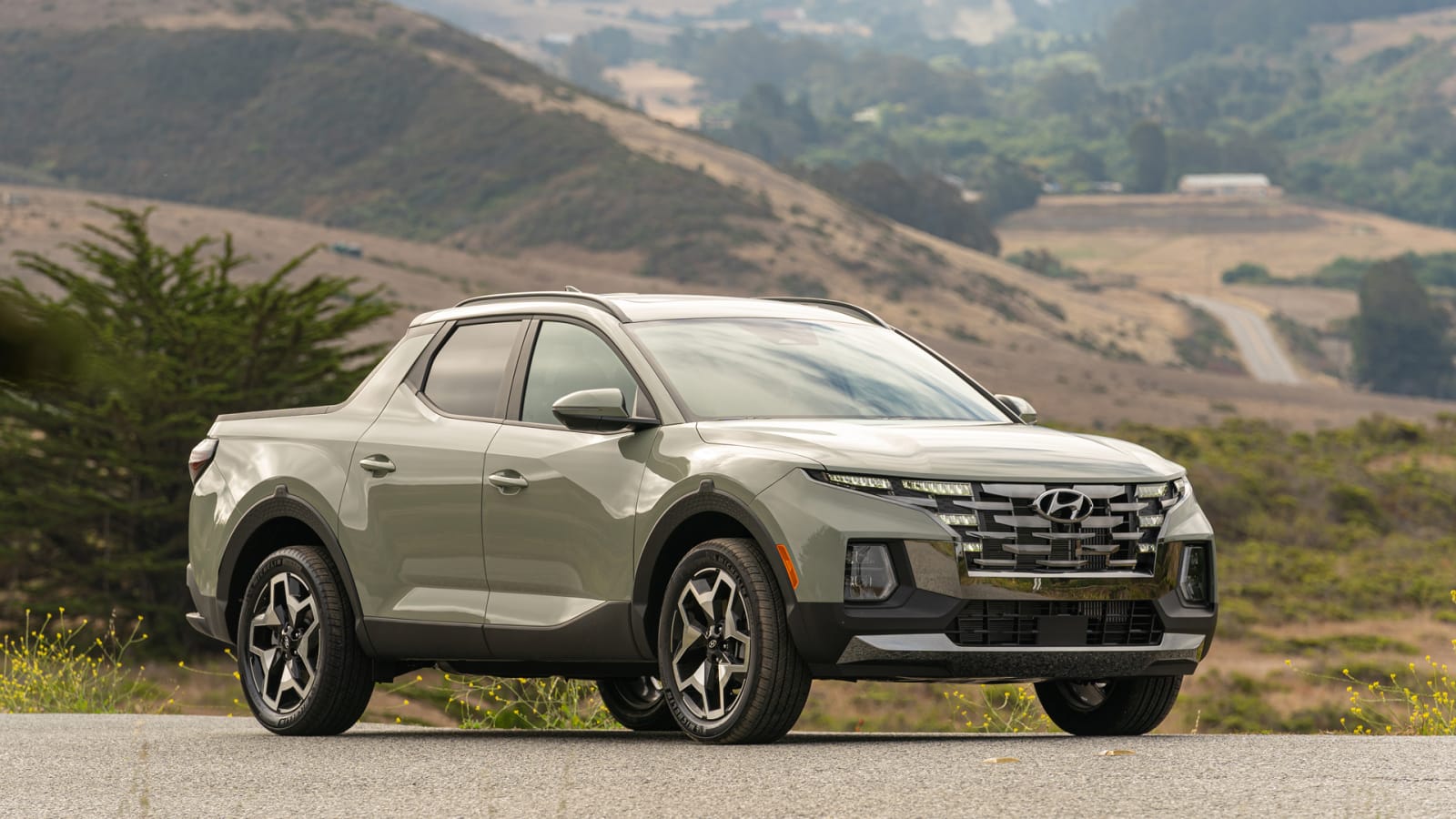 PALO ALTO, Calif. – It’s a rare day when a new vehicle comes along that has no existing segment or competitors already on the market. It could be the next big thing that spawns copycats, an evolutionary dead end or something that correctly identifies a target but misses the bullseye. Well, that’s what we have with the 2022 Hyundai Santa Cruz. At the very least, it isn’t some Chevy SSR, an oddball creation for extremely niche tastes. It’s both a pickup and a compact crossover, two things Americans love. It has features and power aplenty. It’s surprisingly fun to drive and impressively refined. On the one hand, judging by those attributes, it could be wildly successful.

On the other hand, it doesn’t look like a conventional truck, which hasn’t gone well in the past (see Honda Ridgeline). The Ford Maverick does. Yes, there eventually will be a competitor, but even before we’ve driven that, it’s obvious Ford and Hyundai went in very different directions in trying to nail the bullseye on a target labeled “compact crossover pickup.” That applies to their powertrains, pricing and interiors, but for starters, let’s talk about the styling.

The Santa Cruz you see here is based on the Santa Cruz Concept from 2015, but much was done to adapt it to new-generation underpinnings and Hyundai’s latest design language. That’s most obvious with the slender, T-shaped tail lamps and Tucson-like LED accent lighting that uniquely blends into the grille, but there are subtle, important differences with the otherwise broadly similar silhouette.

Note the C-pillar. According to Design Manager Brad Arnold, his team toyed with boxier bed/C-pillar silhouettes to make it more conventional (not unlike the second-generation Ridgeline), but then they figured this wasn’t to be a conventional truck. They also toyed with something like the Tesla Cybertruck (long before it was revealed) where the roofline extends all the way to the tailgate, but there was fear that would be confusing and too radical (not unlike the first-generation Ridgeline and, well, the Cybertruck). The end result, as you can see, is somewhere in the middle but a bit closer to conventional than the original concept. 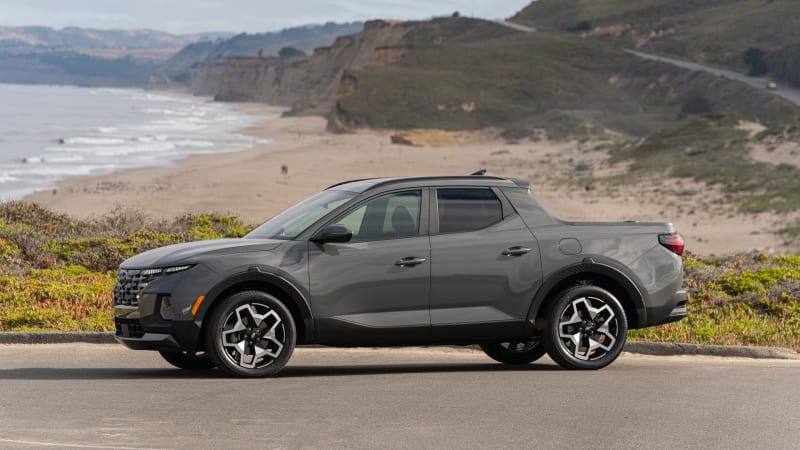 It’s also a key reason that the Santa Cruz looks so sensational in person. Its proportions are spot-on, and its body details are just interesting enough without venturing into the overwrought (and pointy) territory of the Tucson and Elantra. Arnold says the goal was to achieve a vehicle that appears muscular and strong for its general outdoor adventurer vibe, but also sporty for the urban, on-road environment where it’ll mostly dwell. Turns out that last bit was especially important.

“Actually, because it looked sporty, we made it sporty,” vehicle development engineer Chahe Apelian admitted after hearing Arnold describe what his team was going for visually.

And indeed it is sporty. The Santa Cruz is one of the most responsive and agile compact crossovers … regardless of what’s going on behind the C pillar. There is absolutely nothing truck-like about it, which is perhaps a bad thing if you desire a bouncy ride, tippy handling and slow steering. Otherwise, it proves to be shockingly sharp and capable of flicking about a twisting mountain road. We actually drove the Santa Cruz after a stint in the new Hyundai Kona N and were a bit worried our perceptions of the truck might be unfairly clouded by the pseudo hot hatch. Not to worry. They play in different leagues to be sure, but the game is the same.

Nudge the drive mode toggle into Sport and the steering loses its initial bit of off-center numbness in favor of just the right amount of extra effort. The suspension, with its independent multi-link setup at the rear, remains resolutely planted and composed. At the same time, the ride is on the firm end of the spectrum, but not in a truckish way. More in a Mazda CX-5, firm-but-well-damped way.

Then there’s the powertrain. We did not drive the 191-horsepower naturally aspirated 2.5-liter base engine, and judging by our time with that powerplant in the Tucson, it’s probably best we didn’t, even if it makes slightly more power and torque. Instead, only the 2.5-liter turbocharged engine was on hand, boasting 281 horsepower and 311 pound-feet of torque. That compares with 250 hp and 277 lb-ft in the slightly lighter Maverick, and heck, it’s better than the 270 hp and 310 lb-ft in the heavier Ford Ranger. It’s also considerably more than the typical compact crossover engine upgrade. The Tucson doesn’t offer it.

It feels every bit as quick as those figures and comparisons would suggest. The eight-speed dual-clutch automated manual is exceptional as well. It doesn’t draw attention to itself in mundane driving with delayed responses or odd low-speed behavior, yet fires off shifts more rapidly than an automatic can. It gets even spicier in Sport mode, and when using the chunky paddle shifters, it will remain in manual mode rather than automatically reverting back to fully automatic at some point. That’s as much a benefit for engine braking on long downhill stretches as it is when towing.

Speaking of which, the turbocharged Santa Cruz has a 5,000-pound tow rating versus the turbo Maverick’s 4,000 pounds. Its payload of 1,748 pounds also bests the Ford’s 1,500, while benefiting from self-leveling rear dampers that’ll prevent that droopy butt look when loaded.

Fuel economy is estimated to be 19 mpg city, 27 mpg highway and 22 mpg combined with the turbo and its mandatory all-wheel-drive pairing. That’s basically the same as the base engine (21/26/23 with FWD and 21/27/23 with AWD), and given its larger displacement, it wouldn’t be surprising if this 2.5-liter manages to better replicate its EPA estimates than the 2.0-liter found in the Maverick and other similarly engined vehicles. Of course, if we’re talking fuel economy, the Santa Cruz does not offer a hybrid powertrain and, as a result, the Maverick and its hybrid’s 37-mpg-combined estimate blow it away. That could prove to be an insurmountable advantage for Ford. Hyundai not surprisingly would only comment about the Santa Cruz as-is, but considering the Tucson is available as both a hybrid and plug-in hybrid … there are possibilities.

So it doesn’t drive like a truck, but what about its truck bed? At 52.1 inches (or 4.34 feet), it’s 2.3 inches shorter than even the Maverick’s toddler-sized bed. Hyundai packed in some bikes with their tires dangling over the tailgate and some awfully short surfboards poking out the back, but there’s no denying the limitations relative the beds of conventional trucks. As such, it’s best to think of the Santa Cruz as more of an alternative to compact crossovers, and specifically, its bed as an alternative gear-carrying solution than a compact crossover’s enclosed cargo area.

To that end, it has some innovative features to make it more than just a big open box. There is a trunk-like underfloor storage bin that’s big enough for two small backpacks and drainable to double as a cooler (or let it be hosed out). It’s maybe 40% the size of the Honda Ridgeline’s and doesn’t benefit from that crossover pickup’s swing-out tailgate, making the bin less useful and a bit difficult to reach inside. Still, it’s better than no sealed storage, and there’s actually more. Two smaller cubbies reside on each side of the bed (one can have a 115-volt power outlet), and an innovative, factory-installed cargo cover rolls out over the bed to keep all your stuff locked away and dry. There are also roof rails, which are rare for any pickup, and you could always plug something into the trailer hitch like Yakima’s Exo system. For reference, the Maverick has its own bed of tricks.

There’s no pass-through from the bed into the cabin as in the old Chevy Avalanche or Subaru Baja, but that might be for the best, because the Santa Cruz interior is almost too nice for a pickup. True, we tested a loaded Limited trim with its heated/ventilated leather seats and myriad other luxuries, but the baseline plastics and other materials should be consistent throughout the lineup. It’s a much richer environment than what you’ll find in the Maverick (we’ve sat in that, but not driven it), and is virtually identical in quality and design as the Hyundai Tucson.

That includes the touch-capacitive controls for the infotainment and climate controls, which show up on upper trim levels (the lower trims have HVAC buttons and knobs, plus odd barrel-like controls for volume and tuning). Though they actually do a good job of responding to your touch, it takes too much concentration to find them with your finger amidst the glossy black expanse. At least Hyundai’s exceptional touchscreen infotainment systems, including the 10.25-inch widescreen upgrade shown here, works just as well as it does in the Tucson, Palisade, Sonata, etc.

Don’t count on Tucson-like backseat comfort, though. The seat back is a tad upright and the seat bottom rather low. The specs say there’s more head- and legroom back there than in the Maverick, but we’d need to sit in the back seats of both to see if that really shakes out in person. 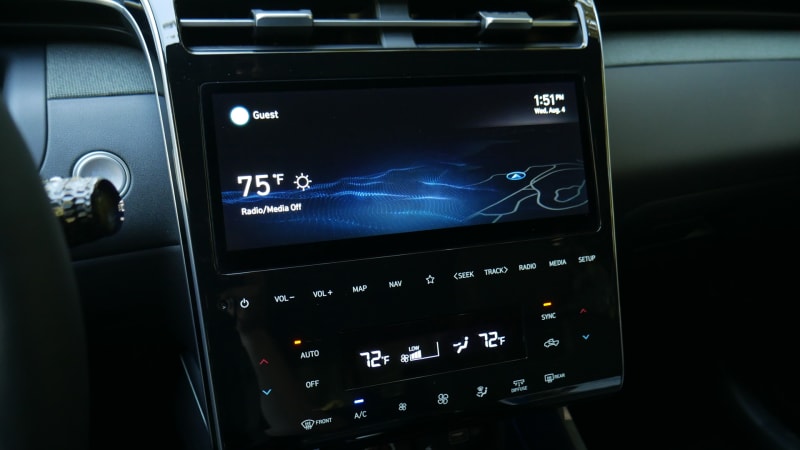 And indeed, we’re eager to drive both of the new compact pickups back to back to see which is the better execution of a common concept. To my eyes, the Santa Cruz looks much better and has a much nicer interior, and if the Maverick’s mechanically related Bronco Sport sibling is any indication, the Hyundai should be better to drive, too. That said, Ford has two big advantages: fuel economy and a lower price.

The base, front-wheel-drive, 2.5-liter Santa Cruz SE starts at $25,175 versus the Maverick at $21,490 (all prices included destination). You can also get the Ford’s turbo engine on the base model, whereas it doesn’t arrive on Santa Cruz until the $36,865 SEL Premium trim. A loaded Maverick also comes in about $4,500 south of our loaded $41,100 Santa Cruz test vehicle. Maybe all those higher prices are justified given its extra/enhanced equipment, better warranty and other aforementioned advantages, but it does seem a bit too steep.

It sure seems weird to come to the conclusion that a Hyundai might be too expensive, but it’s hard not to end there. The Santa Cruz is certainly compelling and would-be buyers of Subarus and other outdoor adventurey crossovers might find it to be an appealing alternative for their particular outdoor adventurey needs. It’s also different enough from the Maverick and free of any other competitors that the price might not even be an issue. Then again, it might be deemed too weird and too expensive. Who knows? Only time and the buying public will tell.