ANN ARBOR, Mich. — The 2022 Honda Civic is the latest generation of a car that’s been around for decades, and that now enters its 11th generation. Like all those that came before, the idea is simple: an affordable, practical car should not just be endured, but enjoyed, and while some updates have been revolutionary for the Civic, each has brought, at the very least, some refinement. For the 11th iteration, Honda brings simple, thoughtful revisions to an already solid foundation without introducing any apparent setbacks.

The new model’s exterior design is cleaned up a bit, but not in any sort of major divergence from the styling of the Civic it replaces. Honda has tweaked the proportions subtly — 1.4 additional inches in wheelbase, a rear track 0.5 inches wider, A-pillars moved about 2 inches rearward, fender height lowered an inch, a rear beltline lowered by 1.2 inches — that make the Civic look longer and more muscular. The glasshouse is taller, and rests atop a more horizontal beltline that makes the cabin look more inviting from the outside. Straighter character lines and fewer unnecessary accents tidy up the exterior, including door handle lock cylinders now hidden from view.

The interior is a place of serenity, and it almost feels like there’s more room to breathe. The flat, low dash and taller windows give a confidence-inspiring view of the world outside. Materials in our Touring model were nice, including the leather upholstery, steering wheel and shift lever. The metal honeycomb mesh across the dash is the centerpiece of the interior, and it looks retro, fresh, simple and interesting all at once. It also neatly obscures the air vents, which can be manipulated with tactile knobs that fall into place with a nice detent when pointed in the dead forward position. The Bose speakers in our Touring tester are cleanly integrated, rather than emphasized. Honda even chose materials that would better resist fingerprints and reflections in order to keep the interior looking as tidy as possible.

It’s comfortable, too, as we’d find over the course of several hundred miles and many hours in the cockpit. The seats — which Honda redesigned for greater comfort in just this sort of situation — remained supportive throughout our long drives. In the rear seat, the headliner is a little too close for comfort, at least in our sunroof-equipped tester. There is extra space carved out directly above the head there, but it dips down just in front of that, giving the illusion that your head is much nearer to the roof. Either way, there was plenty of room for a high-back booster seat, and no complaints from our young passenger. 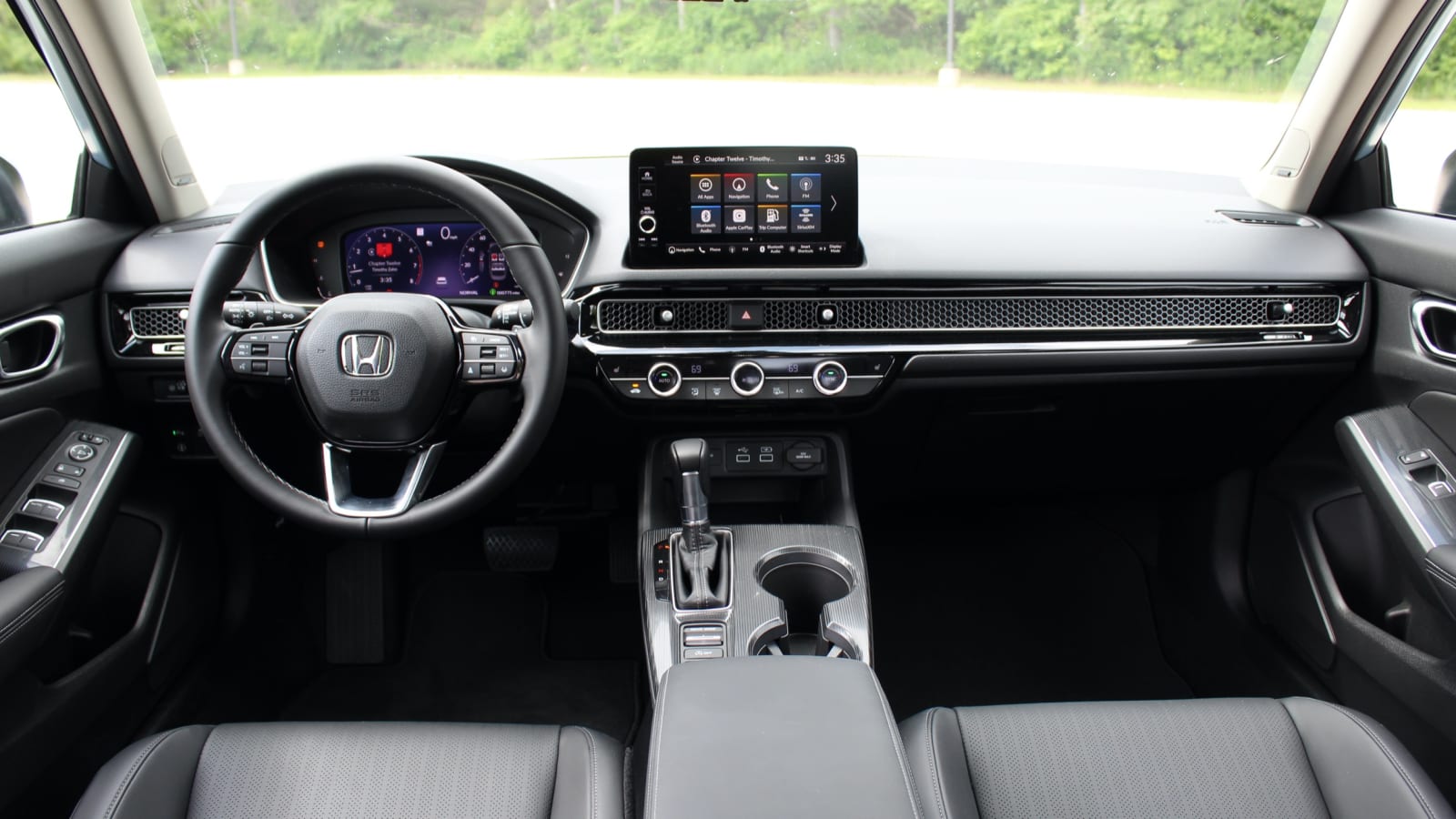 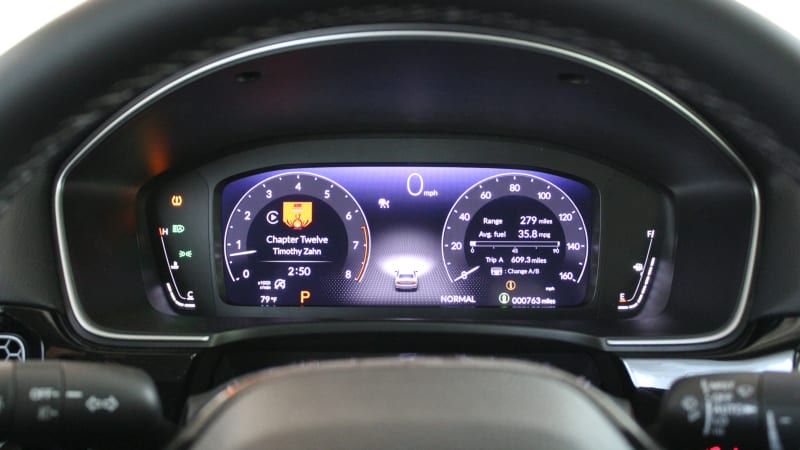 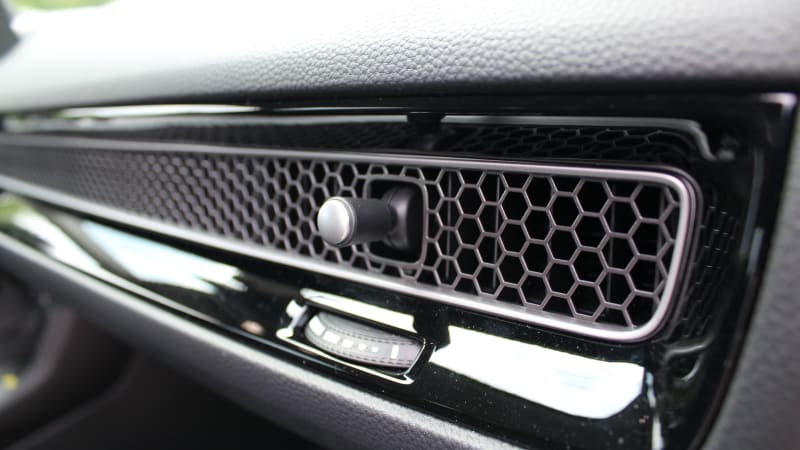 While lower trims enjoy a partial digitization of the instrument panel, the whole thing is digital in the Touring. More important, the Civic gets Honda’s massively improved tech interface that finally appears in something other than the Odyssey and Accord. The general look and user interface are common in every trim level, but screen size and feature content differ. The Touring shown here gets the 9-inch infotainment touchscreen with wireless Apple CarPlay and Android Auto, as opposed to the 7-inch unit with wired CarPlay and Android Auto in the other trims. We like Honda’s use of tiles for the various functions, but also like having the option of using wireless Apple CarPlay — especially when we want to have Waze and Audible up on the screen simultaneously. The wireless phone charger is in a good position, too, and that in conjunction with CarPlay encourages you to leave it put.

The Civic’s standard adaptive cruise control also gets a welcome upgrade. It’s smoother and quicker to react, which tracks with the fact that Honda has updated the system with a wider camera view, eight sonar sensors and updates to more accurately follow lanes and traffic than before. This system follows cars at low speeds and brings you to a complete stop, which was great when stuck in construction traffic on I-75. Honda got the lane tracing ability right in the new Civic, staying centered without much drift toward the edges. This new system also has road sign recognition, which helped us to double check we weren’t setting cruise control at ticket-worthy speeds as speed limits changed on the various highways taking us to Northern Michigan and back.

The Bose sound system is well executed in the Civic. It’s the first time the two companies have partnered, and it seems like a great match. The way this surround system fills this compact car’s cabin is nothing short of immersive. Our conundrum would be sharing the car for multiple hours at a time with a child listening to their own music and shows. This often ends up as a battle between the volumes, especially when they tire of using their headphones. Thankfully, the sound can be focused in various zones (front seats, back seats, driver only). It’s not just a simple fader, but Bose actually tuned each mode especially for each zone with only a minimal loss in overall sound quality. We were able to enjoy the quality production of a Star Wars audiobook while our backseat passenger contented himself with his own media, with very little overlap between the two. 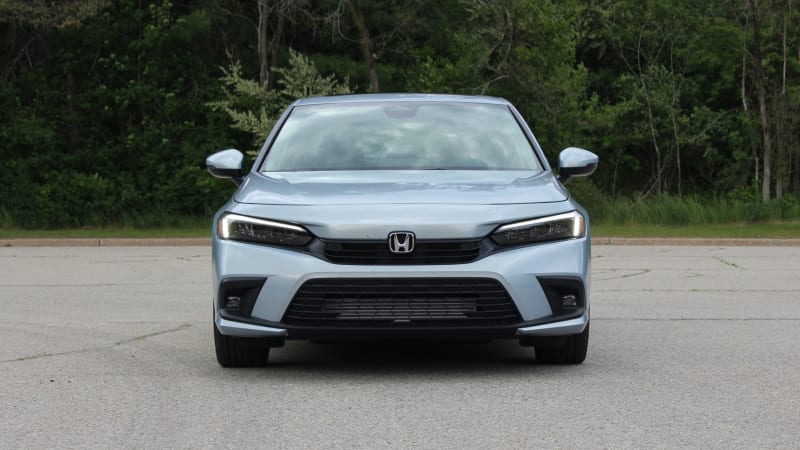 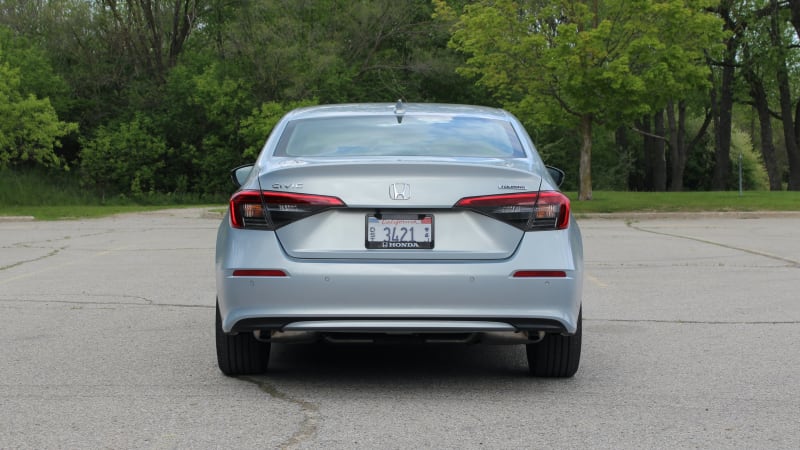 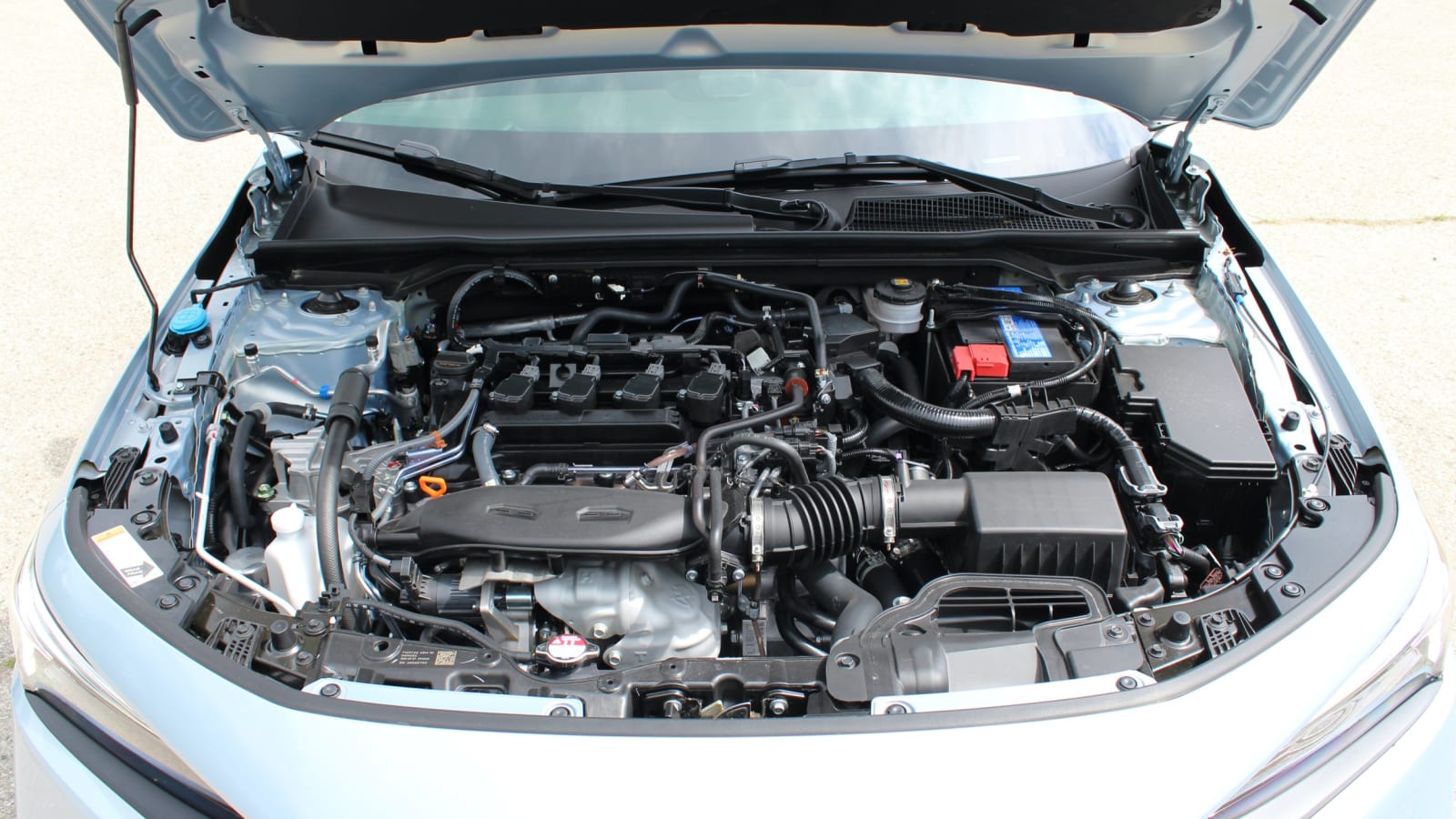 Low-end torque from the turbo-four is ample, and the 1.5-liter is happy to spin the tires gunning it from a stop. Sport Mode only governs accelerator and transmission behavior, making throttle tip-in really snappy. The sound isn’t something that’ll quicken your pulse, but it isn’t too droney thanks to the behavior and simulated shifts of the CVT. Engine noise is further reduced by sound deadening and things like a more rigid crankshaft and oil pan, lighter pistons and a number of other unseen revisions.

Honda has made a number of other improvements underneath the sheetmetal that help improve the drive experience and ride experience. This includes structural enhancements and improved materials that not only stiffen the body and reduce the intrusion of noise and vibration, but (with the help of revised airbags) improve crash safety — particularly against larger vehicles. A retuned suspension and wider rear track make for a smoother, more stable ride. Upgraded electronic power steering reduces vibration and promises better steering feel.

In practice, all these invisible upgrades do indeed provide a more refined and confident experience behind the wheel. Steering is precise and low effort, but not overly light. It makes for smooth transitioning between corners on a curvy road, and the body feels planted as the load shifts from one side to the other. We were able to flog the Civic pretty hard on some of our favorite dynamic roads, and it remained confidently stable and neutral. We can’t wait to see how later Civic variants can improve this handling further.

The story of the 11th-gen Civic has just begun, with this sedan merely the first chapter in what looks to be an exciting, if familiar book. We still look forward to the hatchback reveal later this month and, more important, the new Civic Si and Civic Type R. We already know those will offer a manual transmission. On top of all the goodness we found in this first drive of the new Civic, those variants will build upon a very solid foundation.