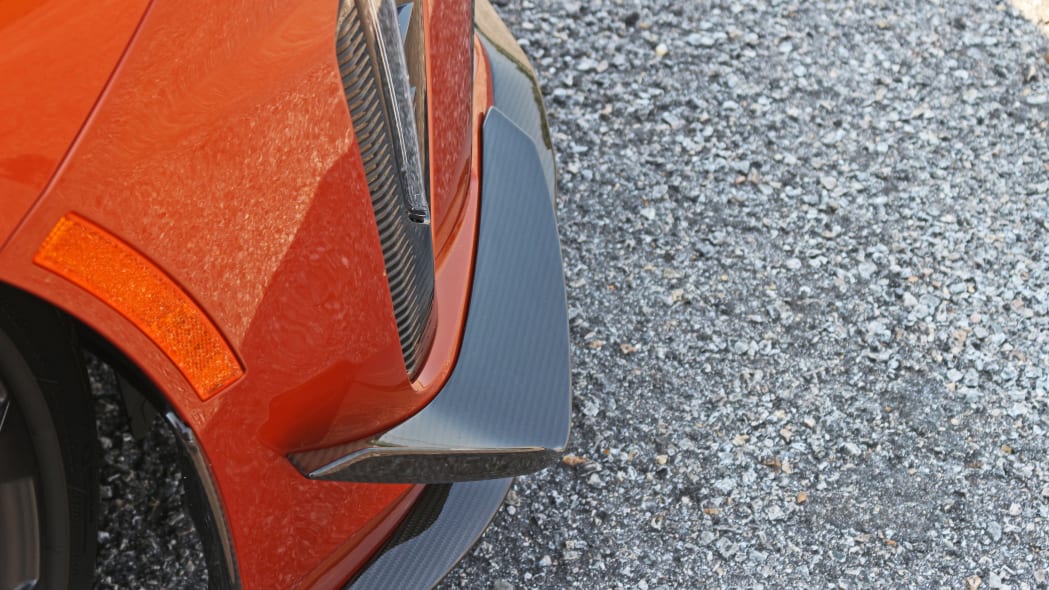 Rising from the ashes of the ATS-V, the 2022 Cadillac CT4-V Blackwing represents the ultimate (in the purest sense of the word) in compact performance from GM’s luxury brand. The name Blackwing was originally applied to a stillborn, twin-turbocharged V8 destined for a new generation of luxury sedans, but has been repurposed as a symbol for Cadillac’s stubborn insistence on doing right by its performance heritage, right up to the end. Yes, the end. The last gasp. The grand finale. Swan song. Farewell tour. Whatever version of finality works best for you, apply it here, because Blackwing represents the gasoline-powered Cadillac’s final form.

There are two key components to a sport sedan: a kick-ass powertrain and a chassis than can wrangle it. Check and check. A modern and powerful twin-turbo V6 resides under the CT4-V Blackwing’s hood, and it rides on the latest and greatest revision of GM’s global Alpha platform, which evolved from the same basic underpinnings of the ATS, CTS and Chevy Camaro. A stretched and widened version is the foundation for the CT5 (look for our review of that car’s Blackwing next week).

In transitioning from ATS to CT4, Cadillac decided to reposition and price its smallest sedan against Europe’s subcompacts. In the grand tradition of Cadillac’s sporty four-doors, this makes it a size mismatch. It’s almost as large on the outside as a BMW 3 Series or Mercedes C-Class, rather than the front-wheel-drive based 2 Series Gran Coupe and CLA-Class with which the CT4 nominally competes on price.

This generational re-branding also resulted in a new, very different approach to high-performance models wearing the letter V. Before, they represented the pinnacle of their respective nameplates, but now, a -V represents the mid-grade offering. Upgraded certainly (limited-slip rear differential, more power, adaptive suspension) but positioned against Audi’s S and BMW’s M-Sport models. Cadillac even calls it “CT4 V Series” in certain places because the situation wasn’t confusing enough. 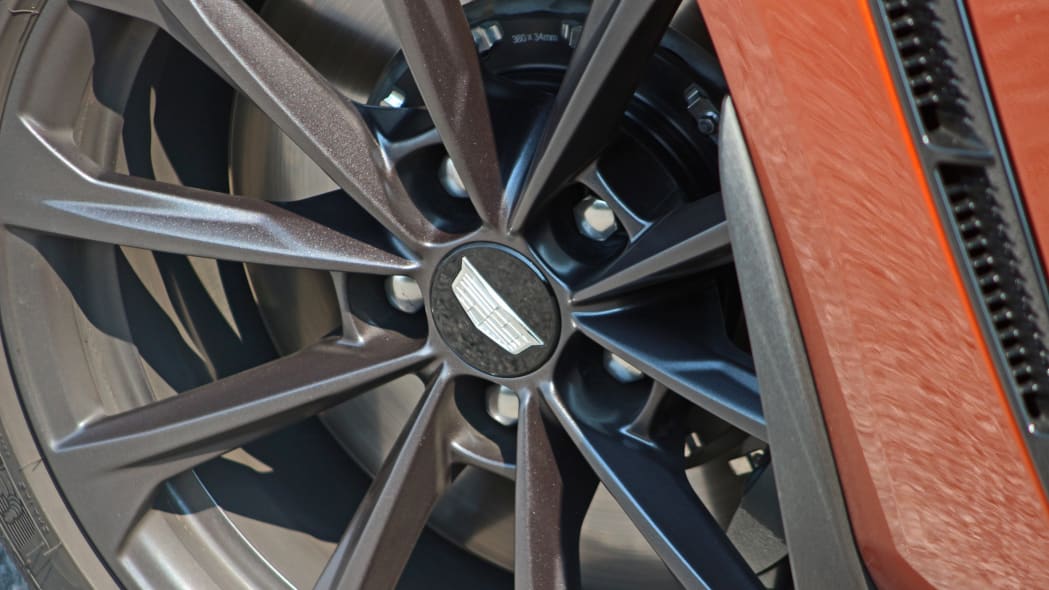 And although there’s nothing ambiguous about the Blackwing’s position atop the CT4 hierarchy, Cadillac’s have-their-cake-and-eat-it-too approach to the CT4’s positioning still makes things a little hinky. The CT4-V Blackwing and its twin-turbocharged 3.6-liter V6 packs 472 horsepower and 445 pound-feet of torque, figures that rival the BMW M3 and others in the compact segment rather than anything in the subcompact segment (the bonkers CLA 45 tops out at 382 hp). Similarly, the Blackwing’s 0-60 times of 3.9 seconds with the automatic and 4.1 with the manual also fit nicely, as does its 189-mph top speed. The manual is rated at 15 mpg city and 23 mpg highway; the automatic at 16/24.

And yeah, how about that? A six-speed manual transmission is standard with a 10-speed automatic optional. It’s also rear-wheel drive to boot. Don’t bother looking at the baby European performance sedans for a row-your-own option; they’re all automatic-only. So are most of the compacts these days.

Between the engine and the driven wheels sits an electronically controlled limited-slip differential (a true mechanical unit; not a brake-based setup) and keeping it all in check is the latest version (4.0) of Cadillac’s Magnetic Ride Control (MRC). Total curb weight with the manual: 3,860 pounds. That’s just 100 pounds more than the much smaller and far less practical Camaro 2SS.

Caddy’s engineers went to great lengths to save weight, some of which (18-inch wheels on a high-performance car) are more obvious than others (no available sunroof). Those 18-inch wheels are wrapped in summer-spec Michelin Pilot Sport 4S tires in 255/35ZR18 (front) and 275/35ZR18 (rear). The rear brakes were also converted to a dual-caliper setup with a dedicated clamp for the parking brake, which both lowered un-sprung mass and allowed for better airflow (and thus cooling). They got an upgrade to a four-piston setup in the process, too, which adds an extra layer of confidence.

On the road, the extra tire sidewall pays huge dividends. In Touring mode, the Blackwing remains planted and nimble but rides, well, like a Cadillac. It’s supple and soothing even over broken pavement, providing feedback at a whisper rather than a roar. “Sport” tightens the steering and the damper response, but still doesn’t punish. It’s not until you get into the Track-specific modes that things get truly flinty.

As with just about everybody else, Cadillac lets you customize the CT4-V Blackwing’s drive modes pretty much exhaustively, with many categories offering more than simple binary choices. Steering, suspension, engine response — you name it, you can customize it. Shift programs are also selectable in automatic-equipped cars.

The manual transmission may not be a commuter’s ideal choice (or, assuredly, a popular one), but the Blackwing’s 6MT is about as pleasant a manual gearbox as there is. The Tremec TR6060-based unit snicks obediently from gear to gear and comes with a rev-matching option that is left off by default, but toggled with the press of a single button next to the shifter. No drive mode requirement. No menu hunting. Just a simple “yes” or “no.”

No-lift shift is also standard, allowing you to keep your right foot planted as you power through the gears, and pairs nicely with launch control to help you hit Caddy’s suggested 0-60 times, which media were able to casually reproduce even with heat-soaked engines in the Virginia International Raceway paddock. Oh, yeah; I got to drive this puppy at VIR.

There, Cadillac had both automatic and manual Blackwings at the ready, all of them showroom stock apart from a track alignment (which Cadillac includes in the owner’s manual, before you protest). For hours, a small group of journalists escaped the 97-degree afternoon with repeated air-conditioned hot laps, absolutely pounding on the little Cadillacs without even a hint of complaint.

We ran VIR’s full course with only one exception – the tiny bus stop on the back straight was included as a chicane to check our speeds going up the hill into the Roller Coaster, but VIR is a thirsty beast, consuming every scrap of horsepower you can throw at it. Even with the chicane in place, 130 was doable on the back straight, and the pit straight invited us even deeper into the revs before braking hard into Turn 1. In my favorite spot – VIR’s famous climbing esses – the Blackwing was an absolute kitten even with mid-corner speeds pushing 110, which was about the limit of my comfort in a strange car on a track I haven’t driven since before the eponymous oak tree fell at what literally nobody refers to as VIR’s turn 12.

The Blackwing rotates like an absolute dream, and even with the Michelin’s tall-ish sidewalls, there’s no lag in its steering. Short of getting absolutely ham-fisted with the controls, the front end offers prodigious, reliable grip before ultimately surrendering to predictable, safe understeer that vanishes with just the slightest lift. GM’s Performance Traction Management absolutely shines here, allowing the driver to quickly dial in just the right amount of intervention – or aid, depending on how you’re using it.

This is the part where I’m supposed to tell you what the catch is. Well, it’s a Cadillac, so if that matters to you, I suppose that’s a drawback. The Blackwing does suffer from a couple of shortcomings inherent to the every CT4 (and the Alpha platform in general), such as a somewhat awkwardly cramped footwell for some, a too-low-and-far-back seating position for others, scarce rear passenger legroom for all and a tiny trunk. Those all persist in this application, but I really can’t think of any other meaningful nits to pick that are exclusive to the Blackwing. Or deal breakers. 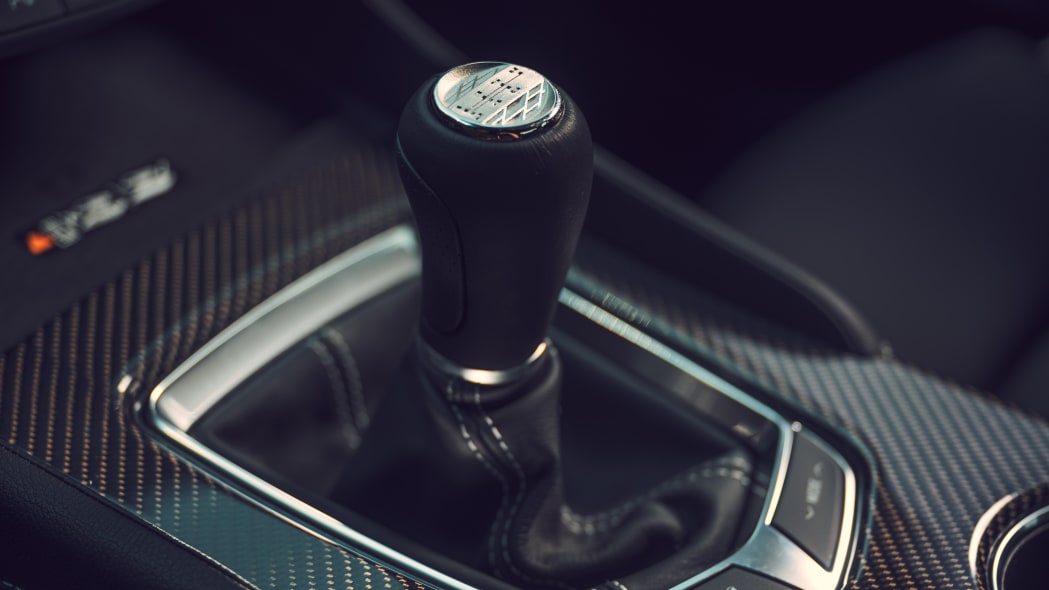 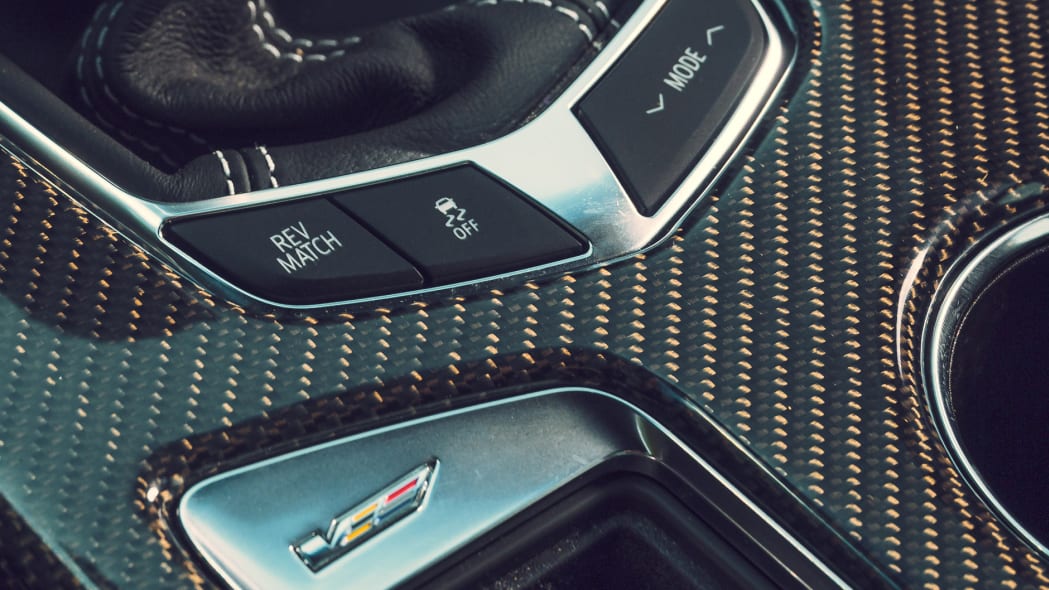 It’s also a stupidly good deal. Since the Blackwing is essentially a CT4-V with a ridiculous performance package stapled onto it, it pretty much comes in two forms: loaded and more loaded. The base model comes with synthetic leather and basic sport seats, which can be upgraded to more aggressively bolstered Nappa leather buckets with composite front seat backs if you’re so inclined. The tech package is quite robust too, including wireless Android Auto and Apple CarPlay, along with AKG premium audio as standard equipment.

The only notable omissions from the base model are adaptive cruise control and automatic emergency braking; they can only be optioned with the automatic as part of the $900 Driver Assist package. The Performance Data Recorder carries over from the ATS-V as well, but it’ll set you back $1,600.

Outside, you can choose from a couple of alternative wheel finishes (matte gray and brass) and add carbon fiber trim. The base carbon fiber package includes track-spec aero elements (splitter, wheel well deflectors, dive planes and enhanced rear spoiler) that actually generate usable downforce. They’re pricey ($4,350 for the basic stuff; another $2,650 for the extra cosmetic bits), but don’t clutter up the exterior too badly and they are functional.

That’s about it. Consequently, the Blackwing’s base price of $59,990 (including destination) doesn’t require much inflation unless you’re picky about the quality of interior materials or really want that extra downforce. Mechanically, there’s virtually nothing to chase. Except perhaps some BMWs.

And that’s what Cadillac has been doing since the first CTS-V debuted way back in 2004. The genesis of the V badge was oversized for its class (sound familiar?) but nonetheless wonderful to drive. While the CT4-V Blackwing may not carry on the CTS’ heavyweight legacy, it hits the bullseye Cadillac has been zeroing in on for nearly two decades: it does what we want a BMW M3 to do – arguably better – without any meaningful penalty.

The sad part is that the CT4-V Blackwing represents the very best of what Cadillac used to do. The brand’s future is in Lyriq and SuperCruise and the rest of what GM’s luxury branch is pursuing in the post-de-Nysschen era of electrification and automation. I can think of no better note to end on.