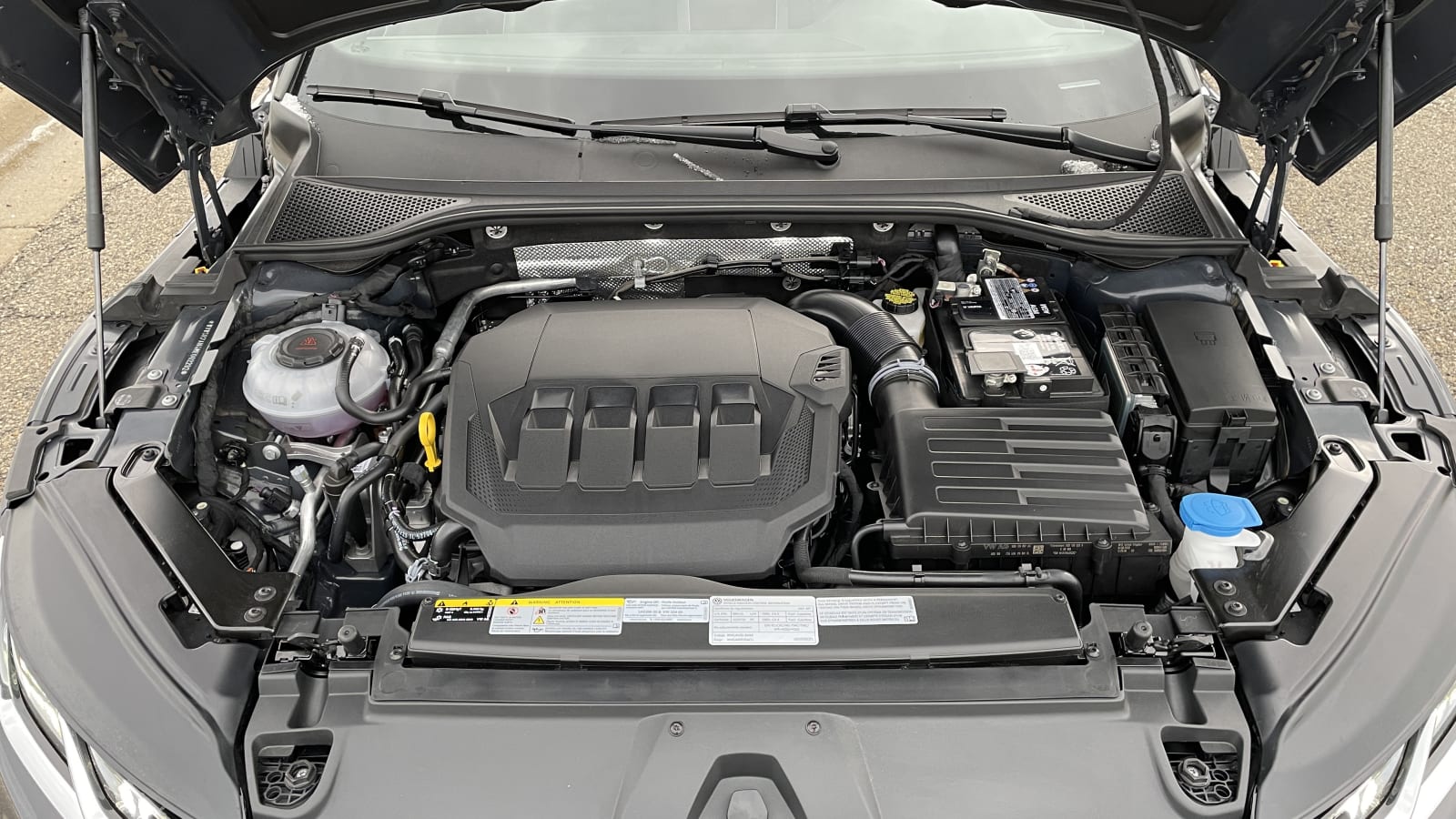 Volkswagen could easily give up on the Arteon in the United States. Only 3,602 sold in 2020. That’s better than the short-lived Phaeton’s best year (1,939 units in 2004) but just edging out the Phaeton is more of a diss than a success story. Countless examples are sitting on dealer lots all across the country with upwards of $10,000 in discounts. The situation is not pretty, which is sad, considering how pretty the Arteon is.

Undeterred, VW is back for 2021 with a new and refreshed argument for its four-door liftback flagship. The main points stay the same, but there’s an extra level of polish that was missing from the 2019 and 2020 Arteons. We’re not getting the handsome Arteon Shooting Brake or quicker Arteon R variants headed to Europe (no business case, VW tell us), but we are getting a more luxurious version of the Arteon.

Outside, VW made the front end flashier. The chrome horizontal grille bars are thicker, and there are fewer of them. Both SEL R Line models gain a thin LED illuminated bar that arcs across the grille in the shape and form of one of the chrome bars. It’s a styling element Volkswagen has been rolling out on new models (the upcoming Taos, the T-Roc sold in Europe), and serves as yet another example of manufacturers pushing the boundaries of lighting technology. Lastly, VW made the front bumper side intakes more prominent, added a couple new wheel designs (the new 20-inch wheels are pictured in the gallery above) and changed the typography of “Arteon” on the rear hatch. The fancy front lighting is the most impactful change, but Volkswagen didn’t have to do much to improve on the formula. This car’s svelte lines and slick sportback shape make it a stunner. Volkswagen says it’s a flagship car, and it looks the part of a proper flagship.

VW must’ve heard the complaints that the Arteon’s existing Passat-grade interior didn’t cut it for the price, because the changes inside are far more comprehensive. The whole dash is redesigned to be less Passat and more Audi A7. All those boring, flat black corporate buttons and controls are replaced with touch haptic glossy surfaces and touch sliders. It’s reminiscent of Audi’s latest MMI with its full touch-control interface for climate and audio buttons, just minus the second screen. Volkswagen also took a chance on a new steering wheel with touch control surfaces, and unlike Mercedes’ touch-sensitive steering wheel, VW pulled it off. The touch controls can be adjusted via swipes of your thumb, but all the surfaces press like normal buttons, too, if you prefer to do it the old-fashioned way. Everything is clearly labeled, positioned ergonomically and works without a hitch. It’s wonderfully executed and truly a best of both worlds solution.

All the surfaces, materials, trims and even air vents are revamped or restyled this year in an effort to bring the Arteon further upscale. The dash has more layers with textured surfaces this time around, but still has that austere look we’re accustomed to in Volkswagen products. Just like the exterior, lighting plays a big new role inside, too. The ambient lighting is embedded and built into the trim on the dash and doors in a dashing pattern on SEL trims (the base trim get aluminum). There’s a huge number of colors to choose from.

VW also integrated its latest infotainment software (MIB3) allowing support for both wireless Apple CarPlay and Android Auto on the 8-inch touchscreen. The Volkswagen Digital Cockpit instrument cluster is made standard, and the upgrade audio system is now branded Harman Kardon, not Fender — VW says the switch was made because Harman is seen as a more premium audio system in the United States.

This array of upgrades is just what the Arteon needed inside. It plays much better as a budget Audi alternative if what you care about is interior ambiance. The near-$50,000 price is much more palatable now.

That’s most of the good, but now it’s time to address the herd of elephants in the room. Volkswagen has done nothing to the powertrain or chassis with this mid-cycle update. It continues with the 2.0-liter turbocharged four-cylinder as the only available engine. This sends 268 horsepower and 258 pound-feet of torque through an eight-speed transmission (a traditional transmission, not VW’s DSG) and on to the front wheels. All-wheel drive is available, and it’s the only version of the car that we drove.

In a vacuum, this powertrain is acceptable. There’s enough torque to shove the car to 60 mph in the 6-second range, and the all-wheel-drive system sends the right amount of torque rearward to put you sideways and smiling in the snow. However, it’s less acceptable when compared to a Kia Stinger GT, the only liftback of similar size and price it can compete against (RIP Buick Regal Sportback). We’ll take the rear-drive (or AWD) Kia with 365 horsepower and sports sedan level handling, thank you very much.

And that’s the other disappointment with the Arteon. Despite looking like a sport sedan, it doesn’t handle like one. The standard adaptive dampers move the suspension between what feels like soft and ultra-soft modes. A numb, elastic feel on turn-in plagues the steering. It lacks the sharpness and body control of a Stinger, opting instead to coddle its occupants in a pillowy ride. If what you want is a comfy boulevard cruiser to crash through poor roads on your commute, the Arteon can handle it. If you want this plus a smile-inducing, quick weekend car, the Stinger is the one to get. 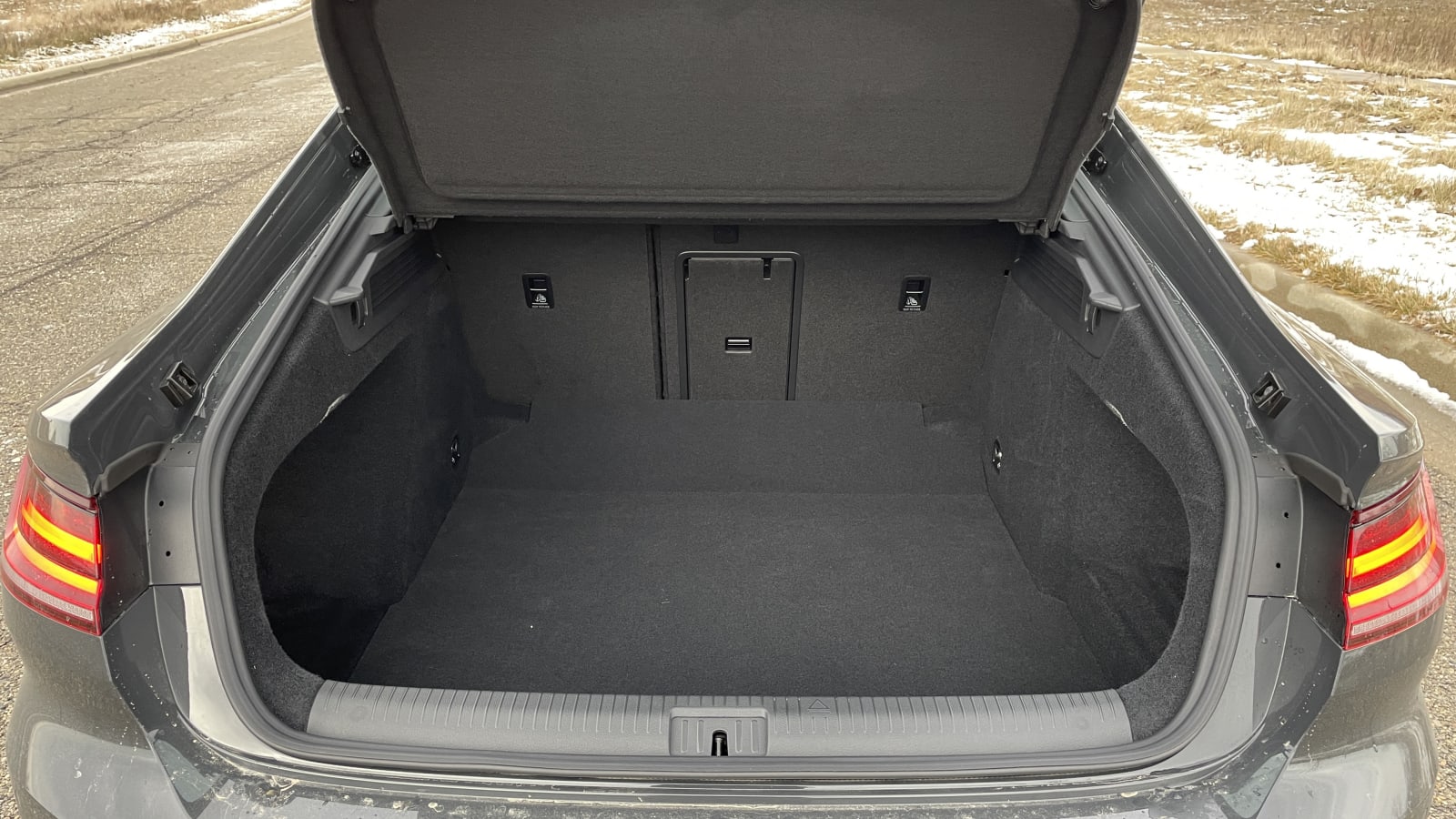 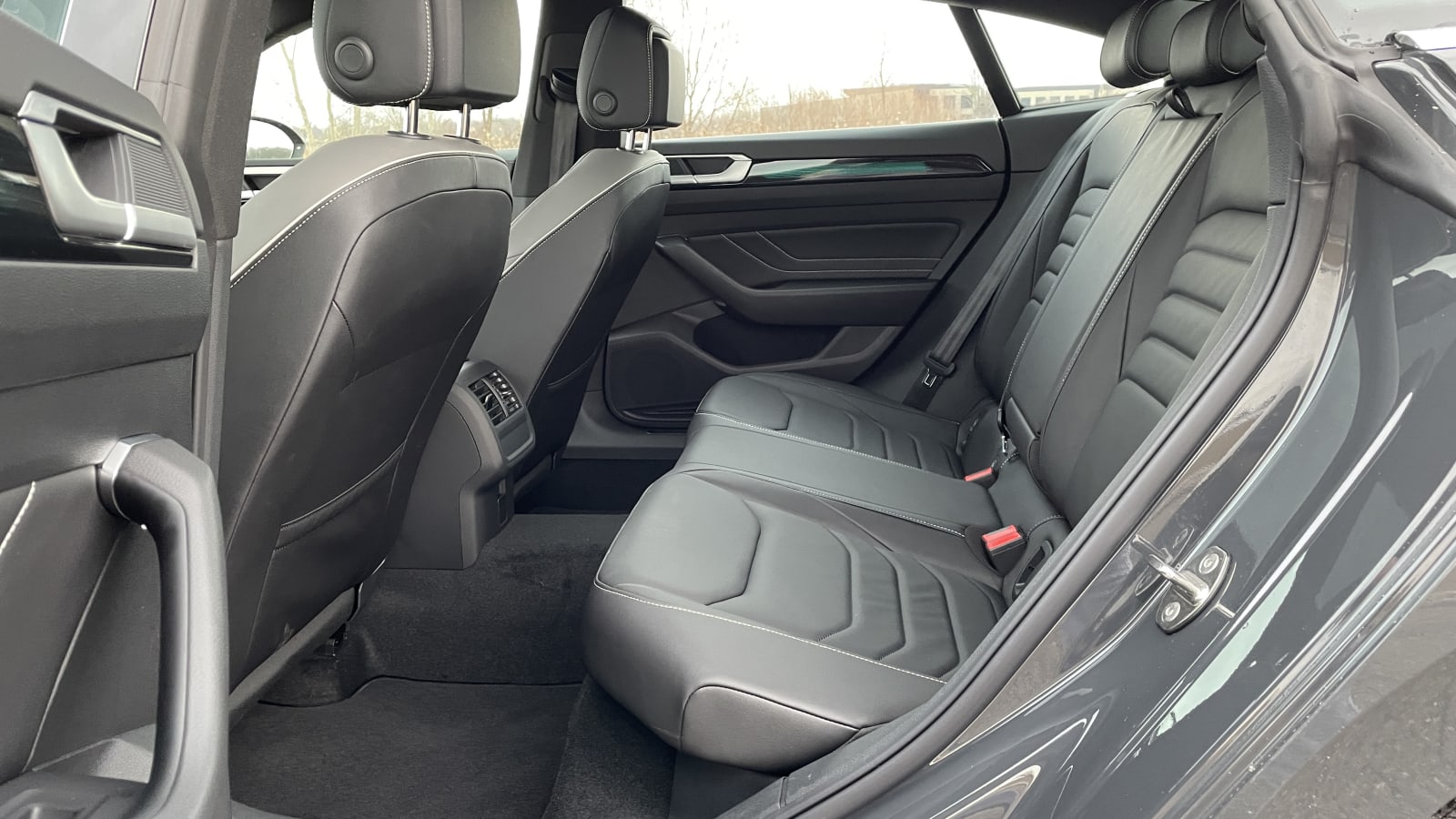 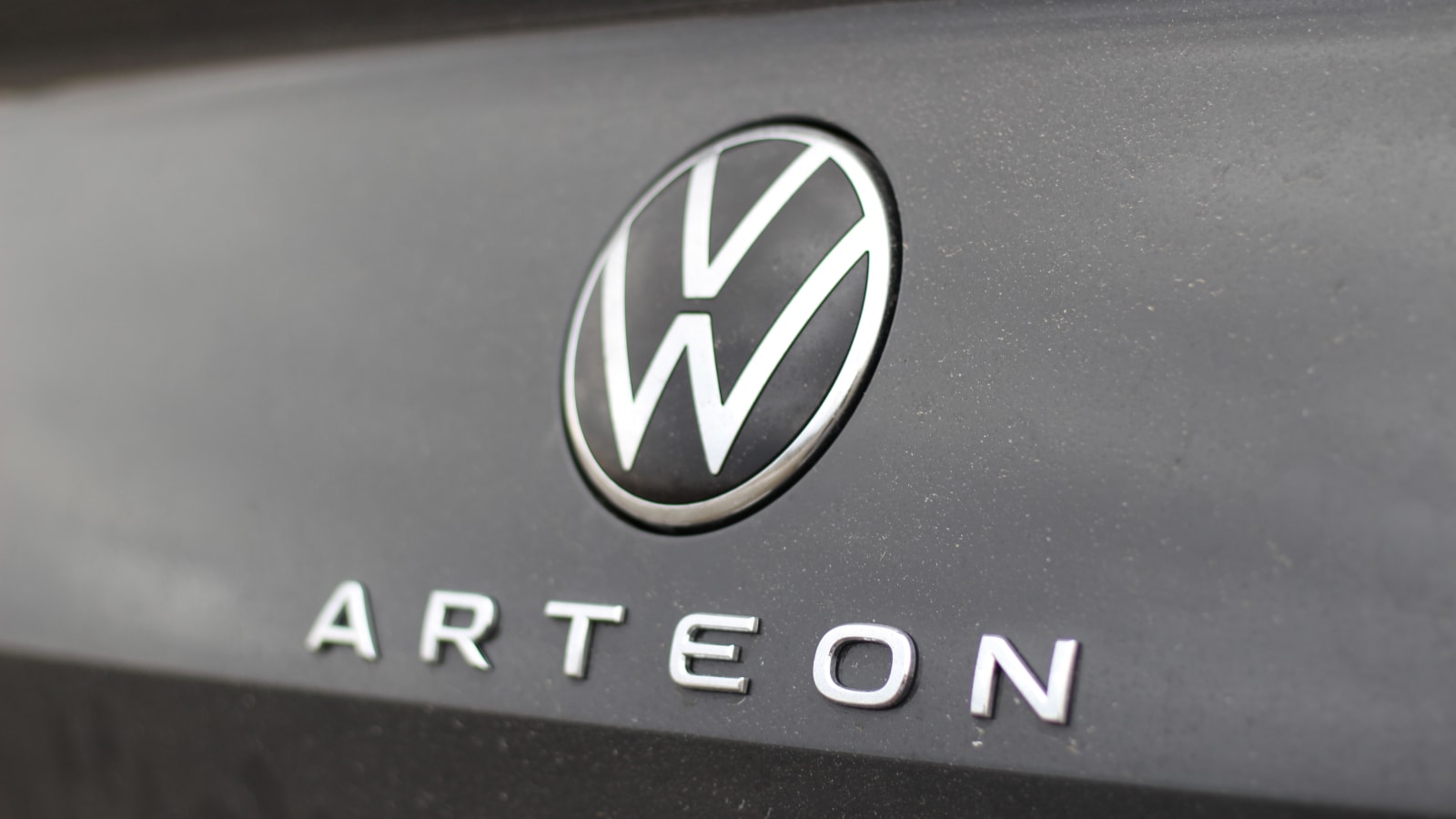 The Arteon’s drive may be forgettable, but there are some things it does better than the competition. Both the cavernous back seat and expansive cargo area are huge pluses and key reasons why you might consider an Arteon instead of a smaller, similarly priced luxury-badged sedan (Mercedes A-Class, etc.). Six-footers could comfortably sit back-to-back, and those in the rear will get to enjoy the ambient lighting, too. Unfortunately, there’s just a single USB-C outlet for the whole back seat. One benefit of its front-drive architecture is a wide and low cargo floor — it’s huge back there at 27.2 cubic-feet, which is just a few cubes under what you get in an Audi A6 Allroad.

Volkswagen will argue that the Arteon is a better value this year. The base SE trim is $38,190, which is $1,175 more than the 2020 model. All the extra standard equipment and upgrades certainly feel worth the extra change, but the last thing Volkswagen needed to do was increase the price. At least the two upgrade trims — SEL R Line and SEL Premium R-Line — are a bit cheaper than their 2020 equivalents. Regardless, there’s a good chance the massive discounts on the updated model end up mirroring those of the outgoing car soon after its freshness wears off.

Much of the slow sales blame likely lies with crossover hunger and big sedan apathy. Still, luxury-priced cars without luxury badges like the Arteon have long struggled. Just ask the Nissan Maxima. Or the Phaeton. At the same time, such a formula is better executed by the exemplary Kia Stinger. It’s sold at a similar price, its GT version has way more power, it has comparable interior refinement and is a style winner itself. If you can live with a touch less space in the rear seat and trunk, a sparsely-optioned Audi A5 Sportback can compete on price versus the top-trim Arteons, too. Granted, the VW will net you a few extra features/niceties at its price versus the Audi, but you’ll miss out on the superior driving experience and an actual luxury badge.

The Arteon ends up landing as an extra-niche choice for those who find niche choices like the Stinger or A5 Sportback a little too common. It’s adequate-to-very good at a number of things, but even with the added tech and more premium interior, it fails to stand out from the competing vehicles in any memorable or enticing way.