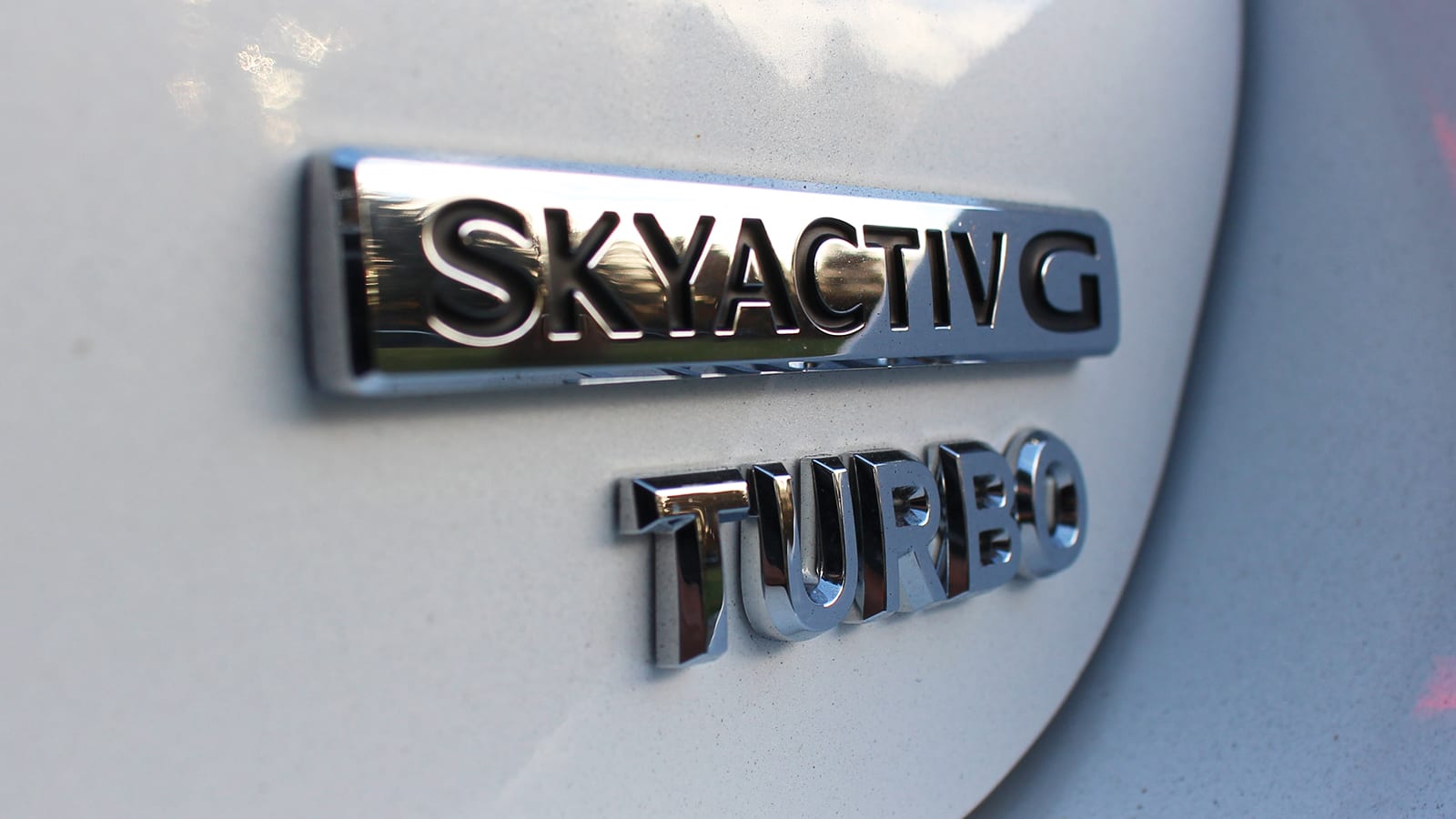 After seven years and an entire generation, there is finally another turbocharged Mazda3. But Mazda will be the first to tell you that it’s not, by any means, a successor to the rambunctious Mazdaspeed3, hence the lack of the name. Having driven it, we’ll be the second to tell you the same: this is definitely not a Mazdaspeed3. It’s an altogether different beast, but it’s still a good drive, and helps make the 3 a credible, budget alternative to an entry-level Audi or Mercedes.

The turbocharged 2.5-liter engine is mostly the same one that Mazda has used in the CX-9 and turbocharged CX-5. It makes the same 227 horsepower and 310 pound-feet of torque on regular fuel (or 250 hp and 320 lb-ft of torque on 93 octane), but it’s been tweaked to fit in the Mazda3’s smaller engine bay. The biggest change is the use of an air-to-water intercooler integrated with the intake manifold that reduces the amount of plumbing. As a bonus to helping the engine fit, Mazda notes that the overall intake piping length is shortened, which should improve responsiveness.

While we can’t speak to the improvement, the engine’s response and power delivery is incredibly smooth. It feels about as close as a turbo engine can get to being like a supercharged or naturally aspirated engine. It’s easy to dial in exactly how much power you want, and there’s never an unexpected rush of turbo boost. All that torque is available low in the rev band, too, so it provides effortless acceleration, especially considering how much less mass the 3 has compared with its turbocharged crossover siblings.

The smooth, relaxed acceleration is in keeping with the upmarket aim of the Mazda3 Turbo, and even compares favorably with powerplants from Audi and Mercedes. Those engines are similarly responsive, but deliver their torque in a fast rush, rather than the more gentle deployment of the Mazda.

The turbo engine doesn’t lose much in efficiency, either. Overall fuel economy drops by just 1 mpg from the naturally aspirated all-wheel-drive Mazda3s. The sedan gets 27 mpg overall and the hatchback gets 26. The engine’s only real downside is that it’s a little noisy under acceleration, emitting a low growl. Arguably the smooth power delivery takes away some excitement often associated with small, turbo cars, but as we said before, this isn’t meant to be a Mazdaspeed successor.

Like the engine, the drivetrain is closely related to other existing Mazdas. The standard six-speed automatic transmission is basically the same one used in the CX-9 and CX-5, but its casing was redesigned to fit the 3. It’s starting to show its age as shifts are relatively sluggish and its selection of six speeds stands in contrast to the eight that has become the more common minimum. This is especially the case when compared against the snappy-shifting seven- and eight-speed dual-clutch automatics found in the entry-level luxury cars Mazda is targeting. However, the 3’s strong fuel economy would indicate its efficiency isn’t suffering for its lack of cogs, and it remains an impressively responsive and smart transmission. It selects gears and downshifting promptly. It also adjusts the firmness of the shifts, choosing smoother, slower shifts when driving gently, and providing quicker, sharper shifts when driving hard. Sport mode also will hold gears longer. Neither Normal nor Sport mode does a great job of downshifting while decelerating, so you’ll want to go to manual shifting for the sportiest driving.

The all-wheel-drive system is similar to the one offered in the naturally aspirated Mazda3, but the rear differential mount has been reinforced to take the extra torque. The system has some interesting capabilities, too. It’s designed to measure the vertical load on all four wheels. If there’s more weight pressing down on a tire or tires, you have a larger contact patch, and more grip. And with more grip, you can handle more power. So the system keeps track of where the weight is and sends it to that end of the car. This means that under acceleration, more power is sent rearward where the weight loads up the tires. Mazda doesn’t say exactly how much torque can go to the back, but it is noticeable. When powering around a corner, you can feel the rear wheels pushing the car around, resulting in a more neutrally balanced feel that’s closer to something like a Subaru or even something rear-wheel-drive than, well, a regular Mazda3. It’s a fun feeling, and something that you’d typically associate with more expensive cars. Another all-wheel-drive perk is that it virtually eliminates torque steer in normal conditions (a spot of gravel or water can still cause a bit when the front wheels slip).

The chassis and suspension of the Mazda3 Turbo are nearly untouched. The front springs have a higher spring rate to accommodate the engine’s extra weight, but only for the purposes of matching the naturally aspirated model. Mazda also added a stiffer steering arm for better feel, but that change was applied to regular models, too. The G-Vectoring Control system, which very slightly reduces power at turn in to shift weight to the front/steering wheels, has been tweaked be more aggressive in Sport mode. Otherwise, the car is just like your regular Mazda3, all the way down to the torsion beam rear end. 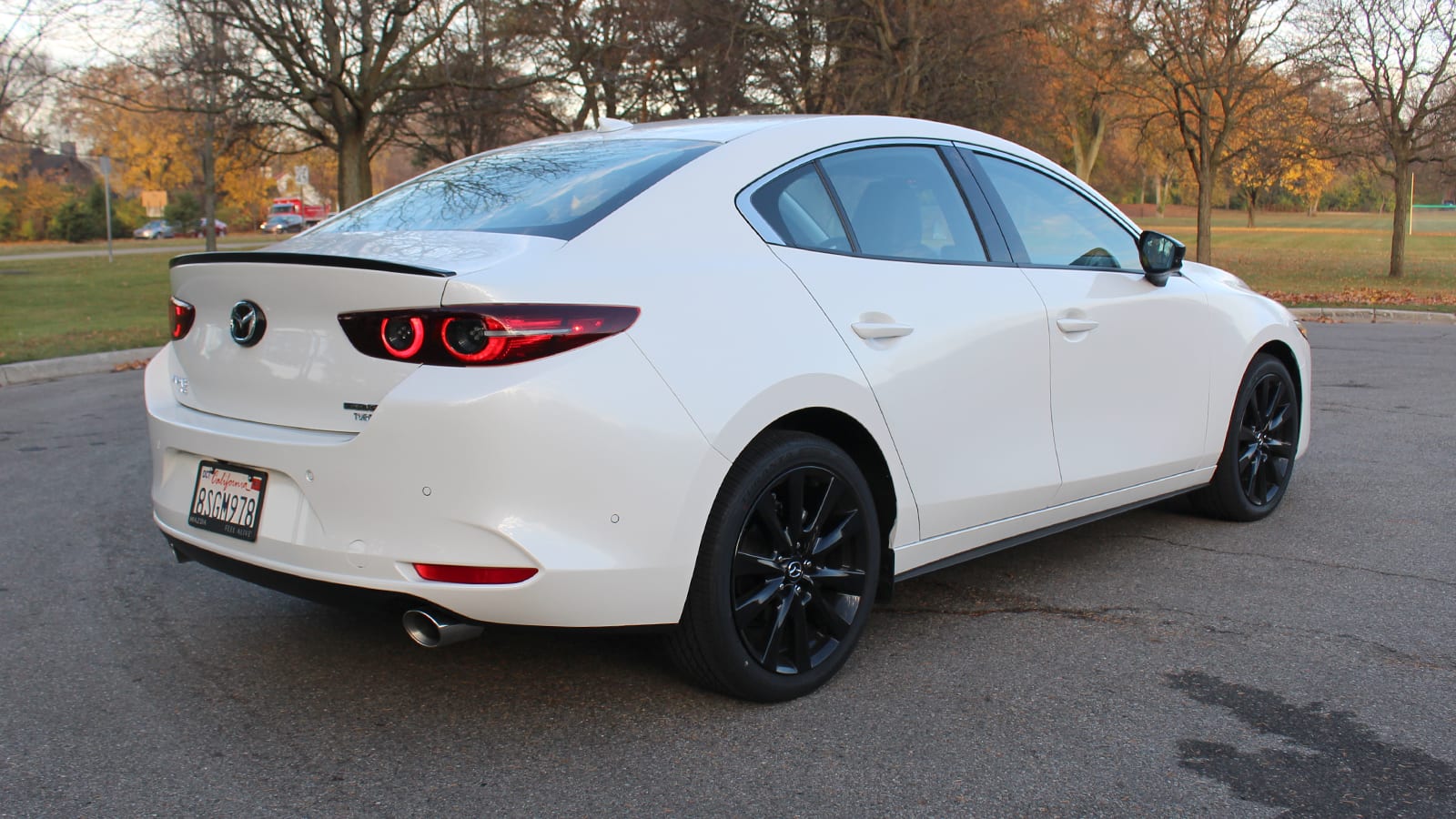 It has a nice ride and handling balance that errs on the side of firm, though with a stiff chassis and very well-controlled body movements. It would be nice to have an adaptive suspension like some more expensive cars, just for the greater choice, but we’re happy to have one well-tuned ride and handling setting rather than two mediocre ones. The car is also generally quiet with just a bit of road noise. Through corners, there’s a bit of body roll, but it feels light and willing to corner. The back end feels a little nervous, though it isn’t upset over bumps. The steering is very smooth and precise, but feedback is limited. The steering weight is relatively light, and Sport mode adds a bit of heft that feels good when driving more aggressively. And while the G-Vectoring Control settings are more aggressive in Sport mode, it’s really difficult to detect.

As for the rest of the car, it’s basically unchanged regardless of the new, more powerful engine. The interior design is still elegantly beautiful. The switchgear feels good to press and turn. The materials include leatherette on the dash and seats on the base Turbo models, and upgraded real leather on the seats of the Premium Plus version. The driver position provides enough head- and leg room for most drivers to get comfortable, but the back seat remains cramped, especially in terms of the hatchback’s headroom. If anything, that’s one more reason, though not in a good way, that the Mazda3 is more like a Mercedes A-Class, BMW 2 Series Gran Coupe or Audi A3 than something like a Honda Civic or Hyundai Elantra. 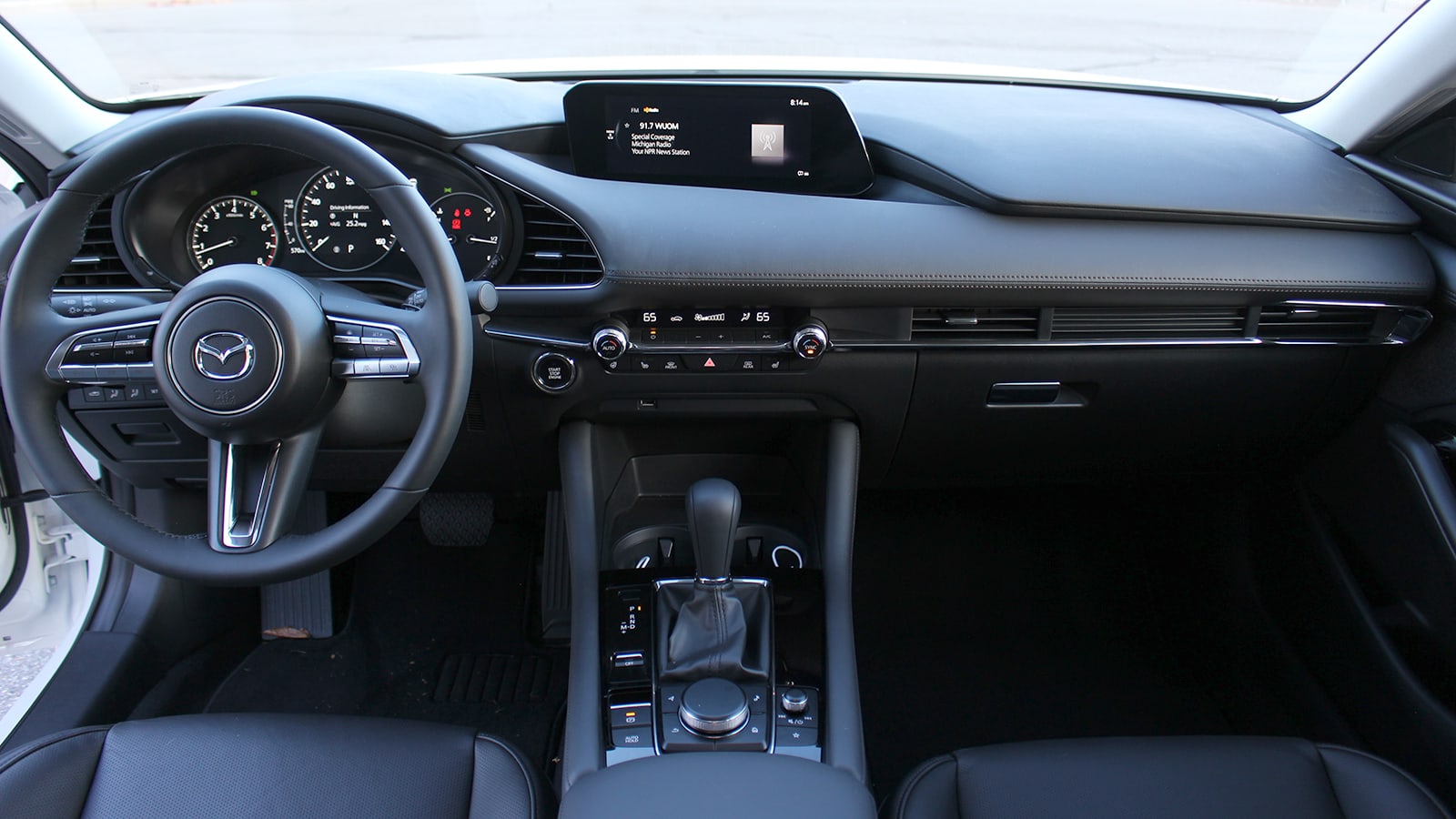 The infotainment system is responsive and easy to navigate with clean, simple lettering and graphics. There’s no touch interface, leaving infotainment inputs to the control wheel and voice control. There is a lack of the flashiness and tech gizmos of cars from luxury automakers. There aren’t any ambient lighting flourishes, no augmented navigation, and a basic instrument panel screen that can display trip information, driver aid status and other related information in addition to the speed. You’re also restricted to a single instrument and infotainment design. On the flip side, the cabin is a more peaceful, relaxed place, particularly at night, compared with the relative disco parties of the luxury alternatives.

Speaking of those luxury alternatives, they’re all significantly more expensive than a Mazda3 Turbo. The Mazda starts at $30,845 for the sedan, and $31,845 for the hatchback. The Premium Plus package adds $2,550 to the sedan and $2,850 to the hatch. Its nearest premium competitors, the Audi A3 and Mercedes-Benz A-Class start a little over $3,000 more, but have less horsepower, no standard all-wheel drive, and no hatchback option. And to equip them more comparably, you’ll be spending around $6,000 more.

So, no, the Mazda3 Turbo is not the third coming of the Mazdaspeed3. But that’s alright. It’s still quite quick and is about the most entertaining Mazda3 you can get (an argument can still be made of the naturally aspirated manual Mazda3), while also remaining comfortable and refined enough to be a pleasant daily driver. It also happens to be an excellent value, offering much of the experience of luxury cars for thousands less. It’s a class act all around.

2022 Subaru BRZ Gets STI And Cabrio Makeover In Unofficial Renderings