It’s easy to forget about the 2021 Land Rover Discovery. There’s the fresh, ever-so-cool Defender sucking all the air in the room, and the vast Range Rover lineup offering subtly different degrees of pure luxury and off-road capability. Meanwhile, the Discovery is attending its own little disco in a corner, hoping to draw some eyes away from other luxury three-row SUVs like the Volvo XC90 or Lincoln Aviator.

Land Rover hasn’t entirely forgotten about its asymmetrical friend yet, though. The 2021 Land Rover Discovery is one of many Jaguar and Land Rover products to get a thorough freshening this year. Despite so little appearing different at first glance, the changes amount to a minor repositioning of the model in Land Rover’s busy lineup.

Instead of moving with the market (and the Defender 110) toward more rugged looks and capability, the Discovery doubles down in the more luxurious, street-friendly direction this latest generation has set from the beginning. Land Rover says the updated Discovery is “more engaging to drive” due to a totally re-tuned suspension with new, continuously adaptive dampers.

Unfortunately, by trying to go toward the sportier end of the spectrum, the 2021 Disco has a new, harsher ride. One might expect the adaptive dampers to soften things up, but Land Rover seems keen on extracting handling improvements over ride comfort. At the same time, the tall, heavy Discovery is still far from a good-handling SUV. It leans all about with slow steering, and those Pirelli Scorpion tires begin protesting lateral Gs right away. The stiffer suspension means it rides harsher and less comfortably than it did before. Highway frost heaves and potholes in the road’s surface cut right to the bone in a jarring way that we’re not accustomed to feeling in SUVs of its stature. Just about every other three-row SUV out there in the Disco’s competitive set rides better (not to mention the surprisingly plush Defender), and the pre-refresh version was more forgiving, too. At least it still has the same vault-like solidity and luxurious demeanor as it travels down the road that Land/Range Rovers are known for. 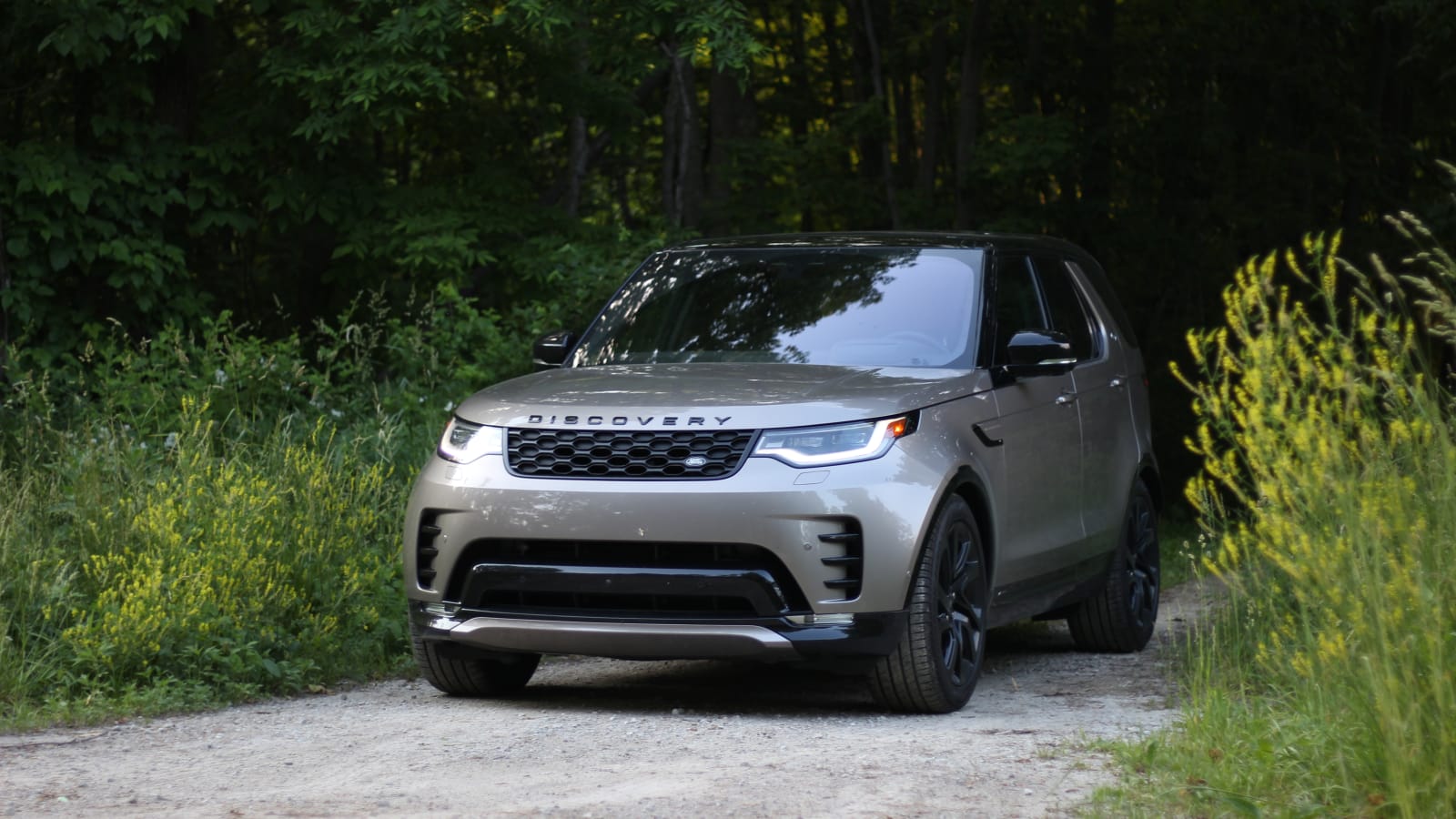 The new, less truck-like powertrains are more successful. The base engine is JLR’s widely-used 2.0-liter turbocharged four-cylinder that makes 296 horsepower, and the upgrade engine is a 3.0-liter 355-horsepower turbocharged inline-six that’s paired with a 48-volt mild-hybrid system. The base supercharged V6 is gone, and so is the likable turbodiesel V6. Land Rover claims the new inline-six gets the Discovery from 0–60 mph in 6.2 seconds, which is 0.7 second quicker than the old supercharged Disco.

We tested the inline-six and found it to be smooth and stout company. Land Rover’s intensive sound deadening and cabin insulation make hearing it difficult, but you get a modicum of drama with your foot down, revving it out to redline. If the diesel put you off previously with its inherent clackity character, this inline-six is just the change the Discovery needed. We prefer it over the supercharged V6, too, as it’s both quicker and returns significantly better fuel economy — its 21 combined is 3-mpg better, amounting to $450 saved in fuel per year, according to EPA estimates. 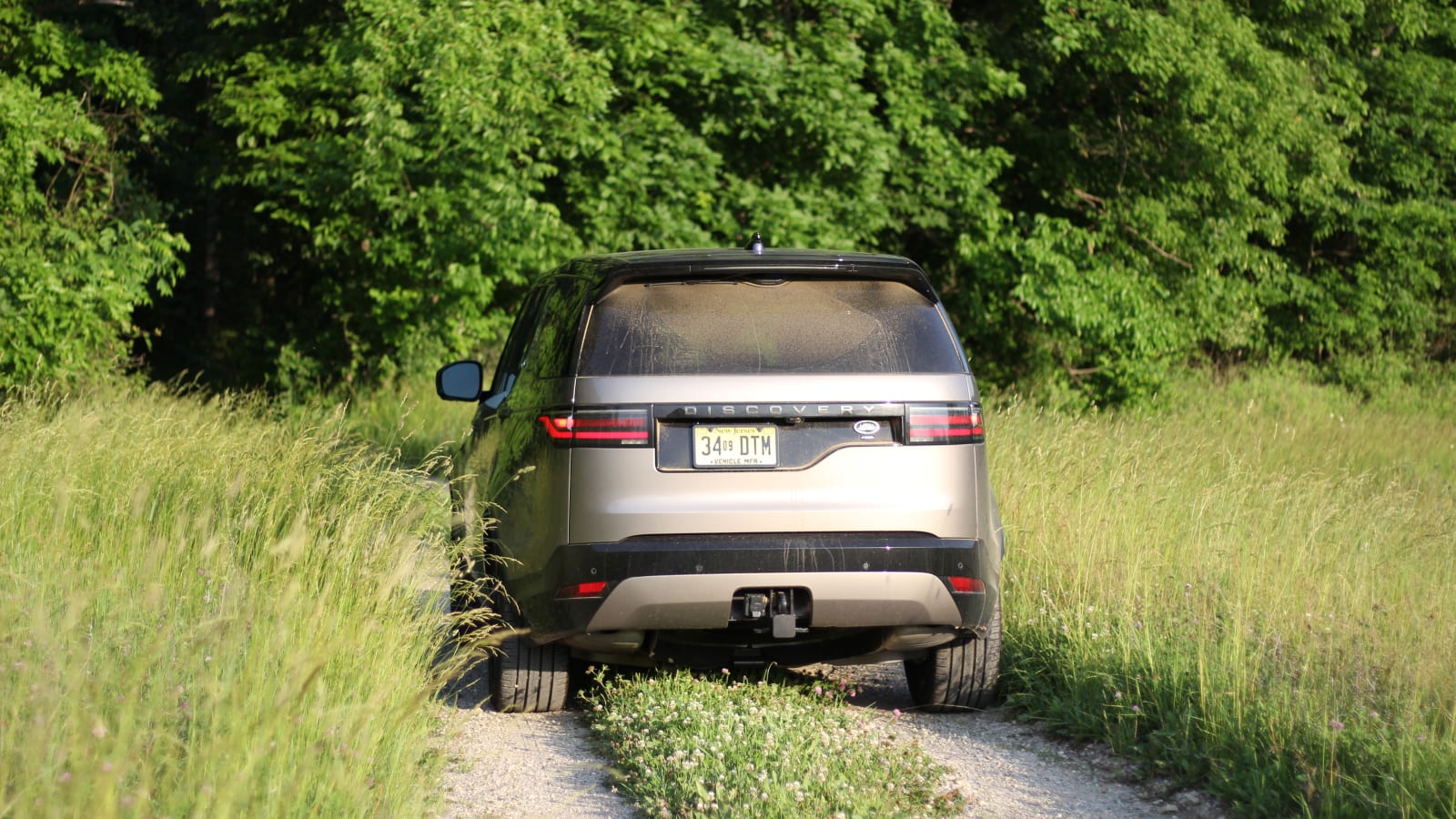 The new, stronger eight-speed automatic’s shifting is a little less smooth than we were hoping for. You notice the first couple initial shifts into second and third as tiny interruptions, but the rest melt together as they do in most cars equipped with this ZF eight-speed. Using the gigantic, metal paddles is something you won’t really be compelled to do as each directed shift comes with a long delay when accelerating or downshifting. At least they’re there for selecting gears on the trails and have a better feel and action than plenty of automatic sports cars.

And speaking of the trails, despite the changes made to make the Discovery more appealing on road, it’s still engineered with a certain degree of off-roading in mind. The aluminum-intensive platform is shared with the Range Rover, and all-wheel drive is standard equipment. Its air suspension can raise the vehicle for greater ground clearance (or drop it down for easier entry/exit), and the low-range transfer case that comes with the inline-six helps out when the going gets extra-tough.

A new Wade Mode also joins Land Rover’s Terrain Response 2 drive mode suite for 2021. As the name suggests, it’s specifically tuned for crossing rivers and is the mode you want to be in when testing out the Discovery’s 35.4-inch wading depth capability. You can leave the terrain mode in Auto most of the time, as Land Rover says it’s engineered to quickly assess what kind of Earth you’re trying to traverse, then adjusts the vehicle from there. 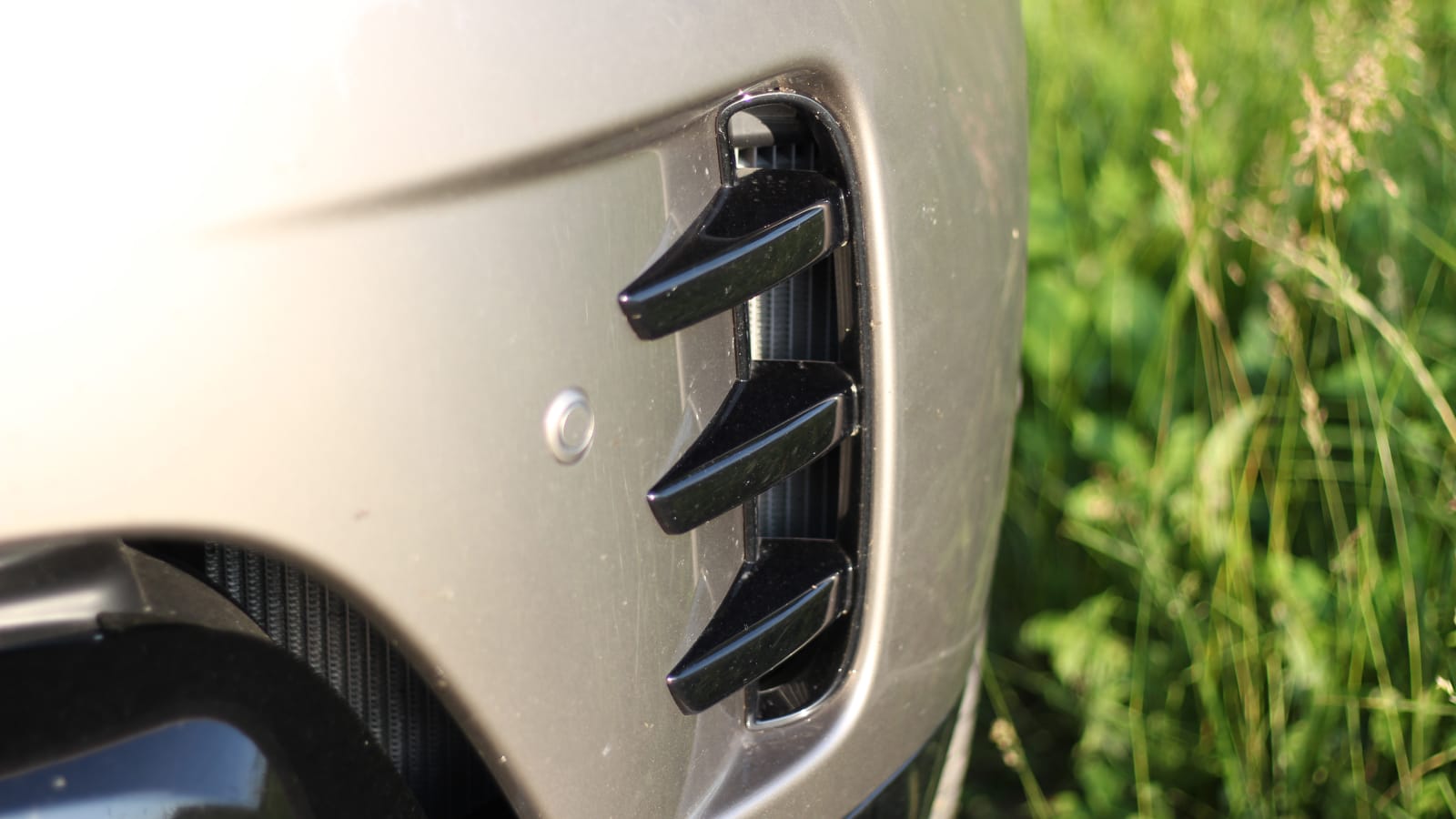 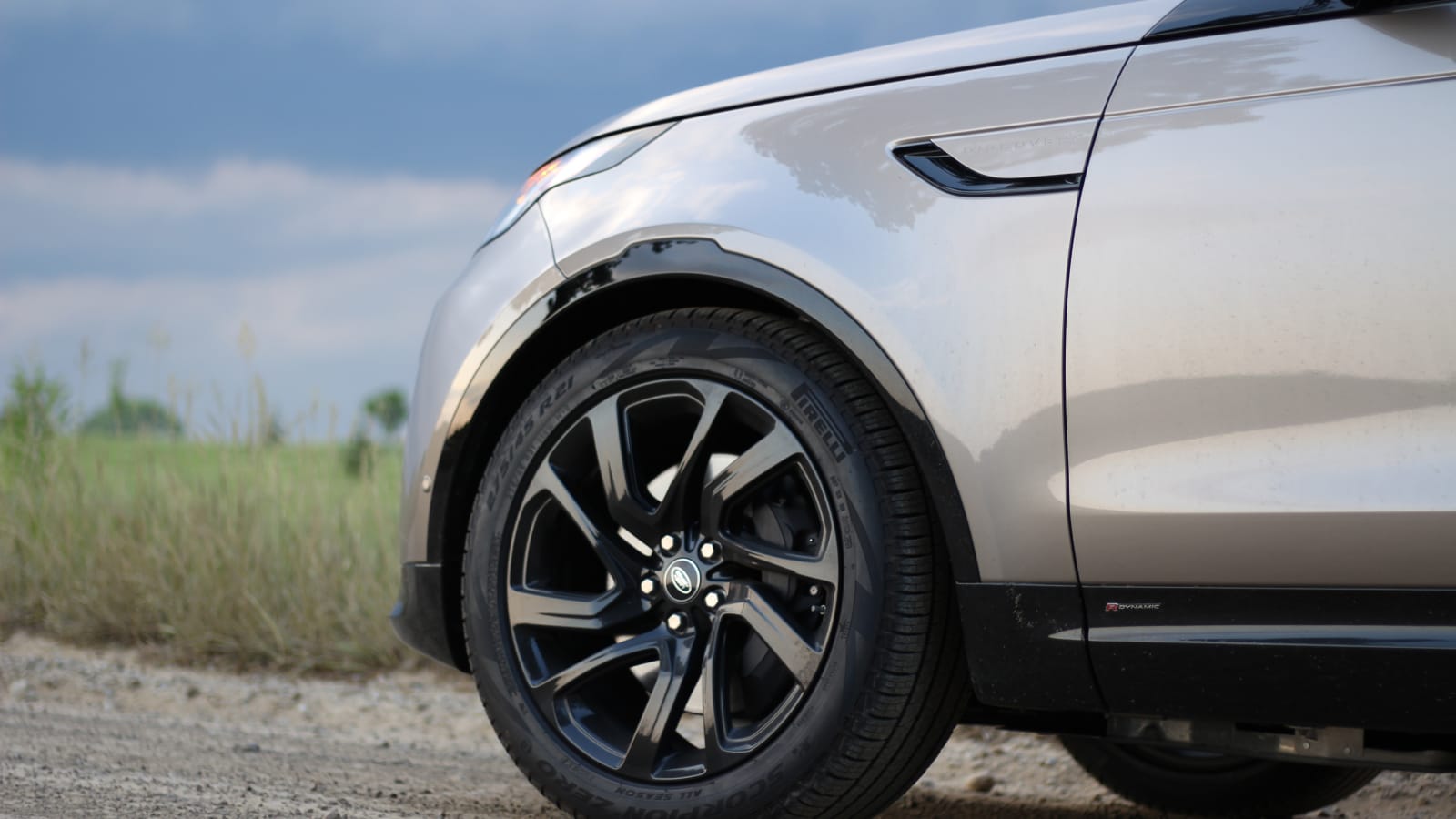 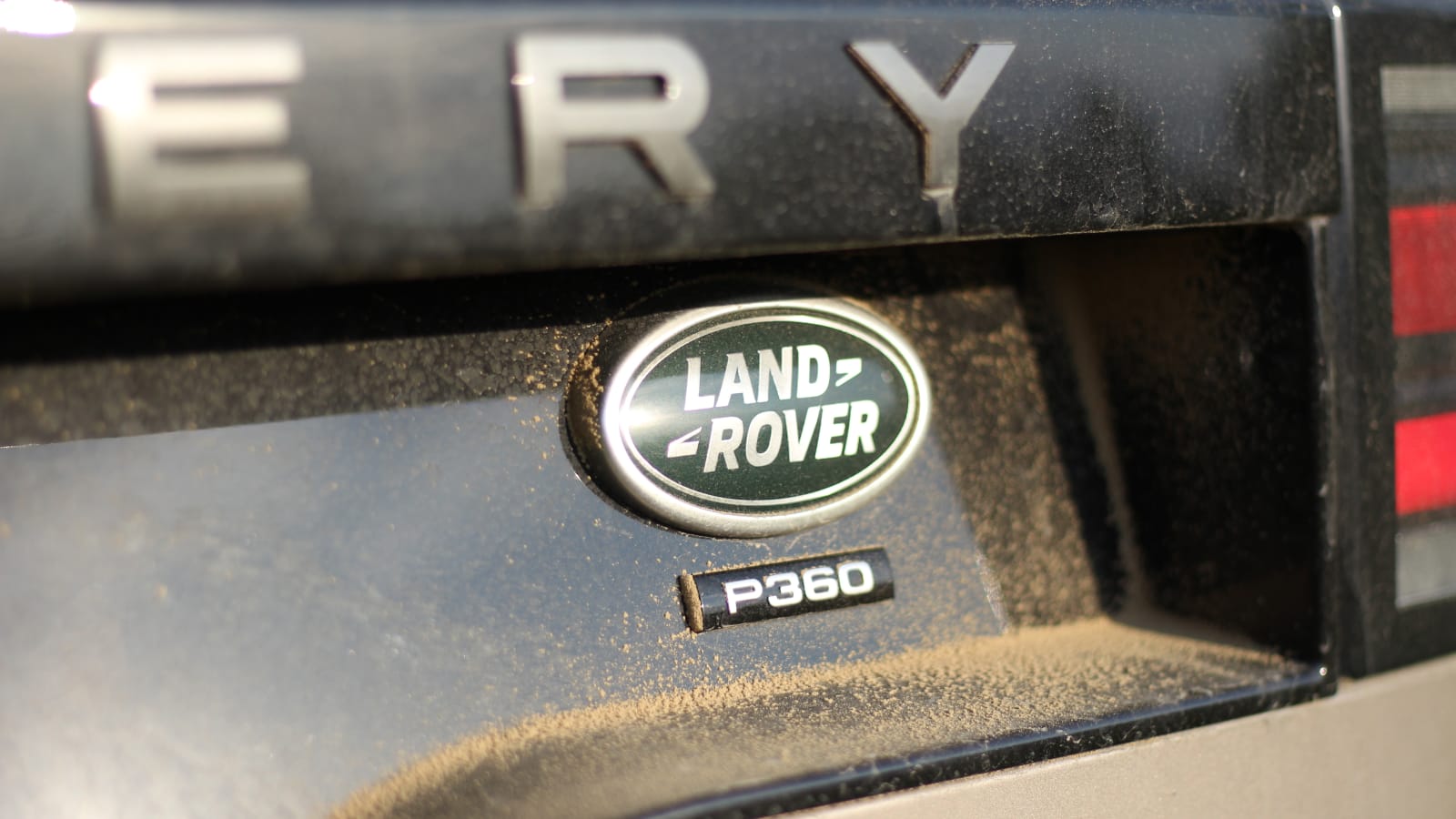 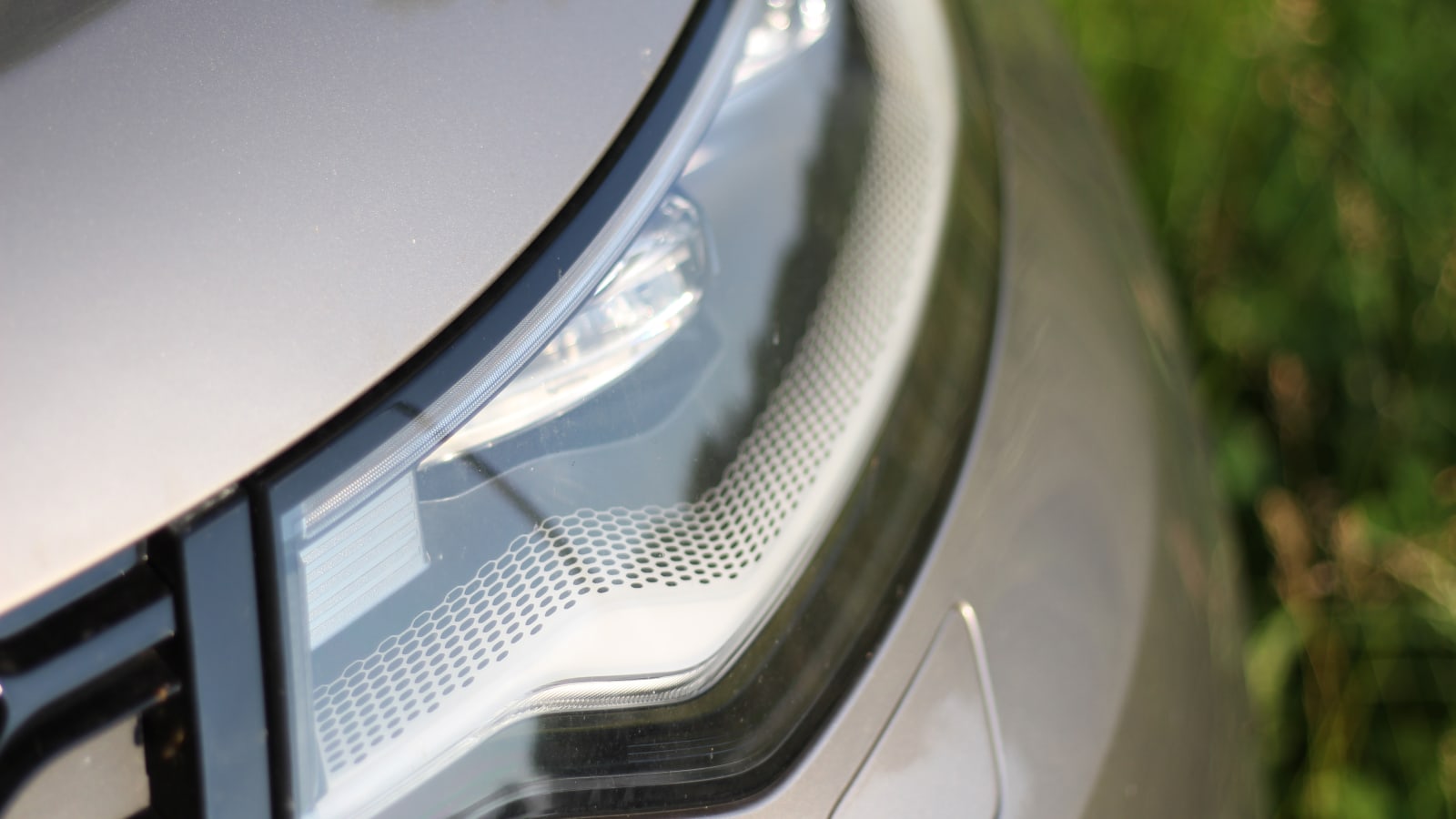 Visually, though, our tester would look pretty out of place attempting to ford a stream. This new trim named R Dynamic S makes the Discovery look far sportier than it did before, completing the more road-oriented transition. Glossy, blacked-out trim enhances the reshaped air intakes and front bumper. There’s a slick, new fender vent, a horizontal black panel in the rear to accentuate its width and new 22-inch black wheels to boot. Our tester looked especially sporting with its classy Lantau Bronze paint option.

Inside, the Discovery continues to have a few more cheaper pieces here and there than the Range Rover family, but the look remains more consistent with those models than its Land Rover Defender sibling. There are significant changes for 2021, though, with none bigger than the new 11.4-inch Pivi Pro infotainment system. It’s far quicker than JLR’s buggy old system, plus the screen is brighter, more responsive and of far higher quality than before. All that said, we still experienced a couple of hiccups. Some menus were slow to load up at times, and Apple CarPlay refused to work on one occasion — turning the car off and then back on fixed the latter.

Just below the big screen is a redesigned climate control system. It’s not the touchscreen setup you’ll find in Range Rovers, but it does feature Land Rover’s complex all-in-one climate and seat control knobs. These take some getting used to, and there was one instance where the passenger heated seat refused to turn on. Restarting the car fixed this one, too. British electronic charm aside, the new digitization of controls does give the Discovery’s interior a more modern and sophisticated look. 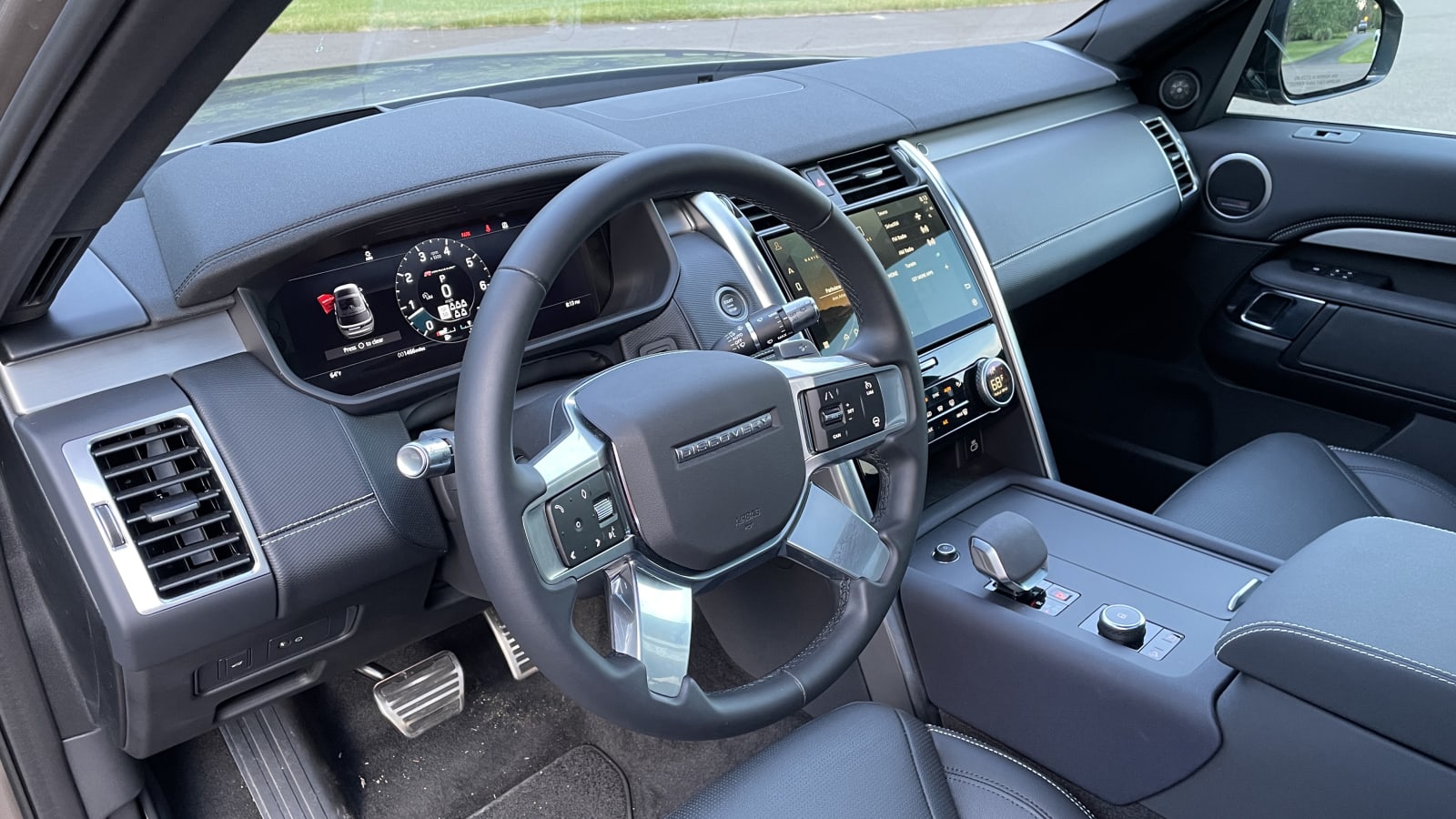 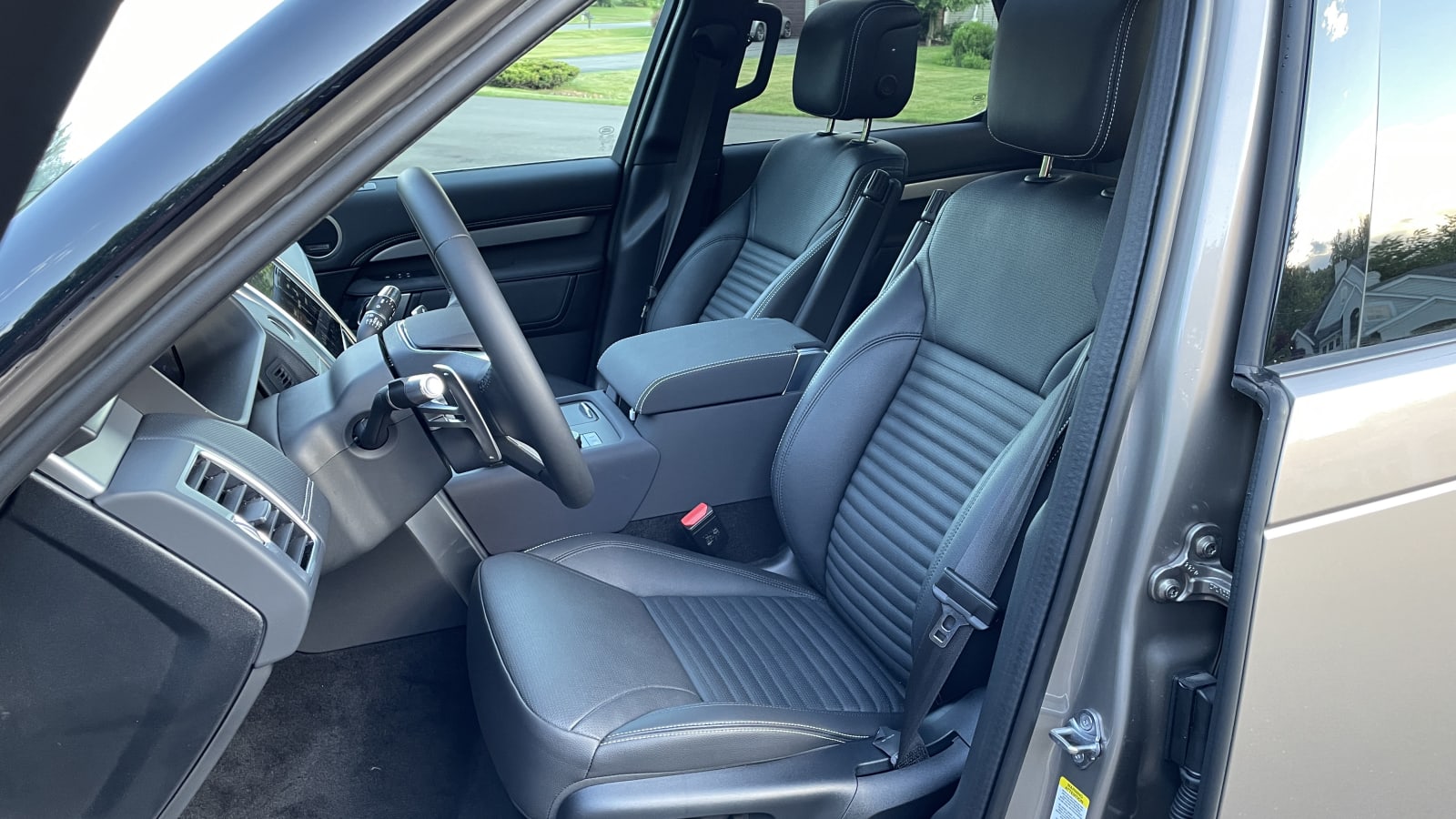 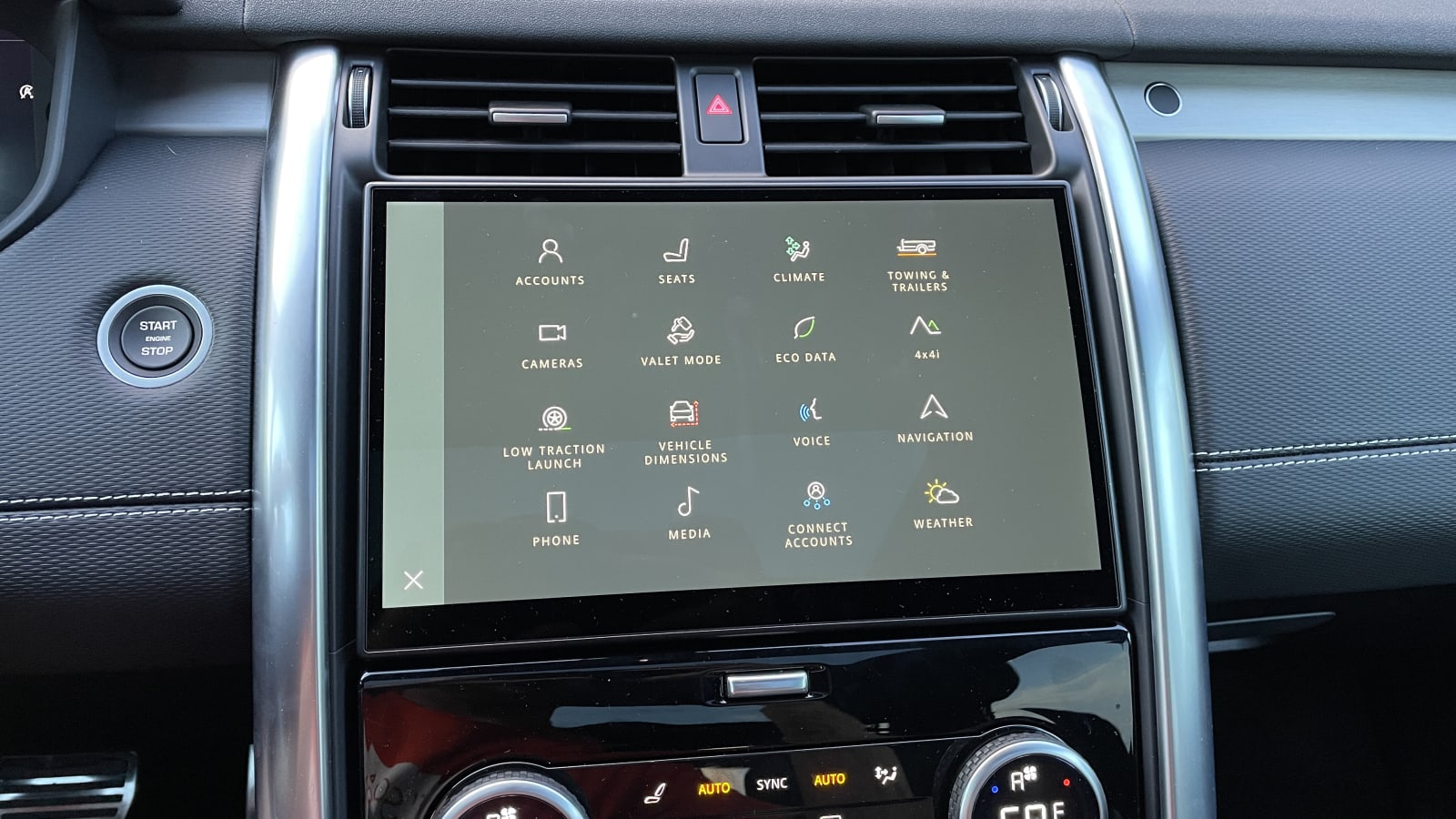 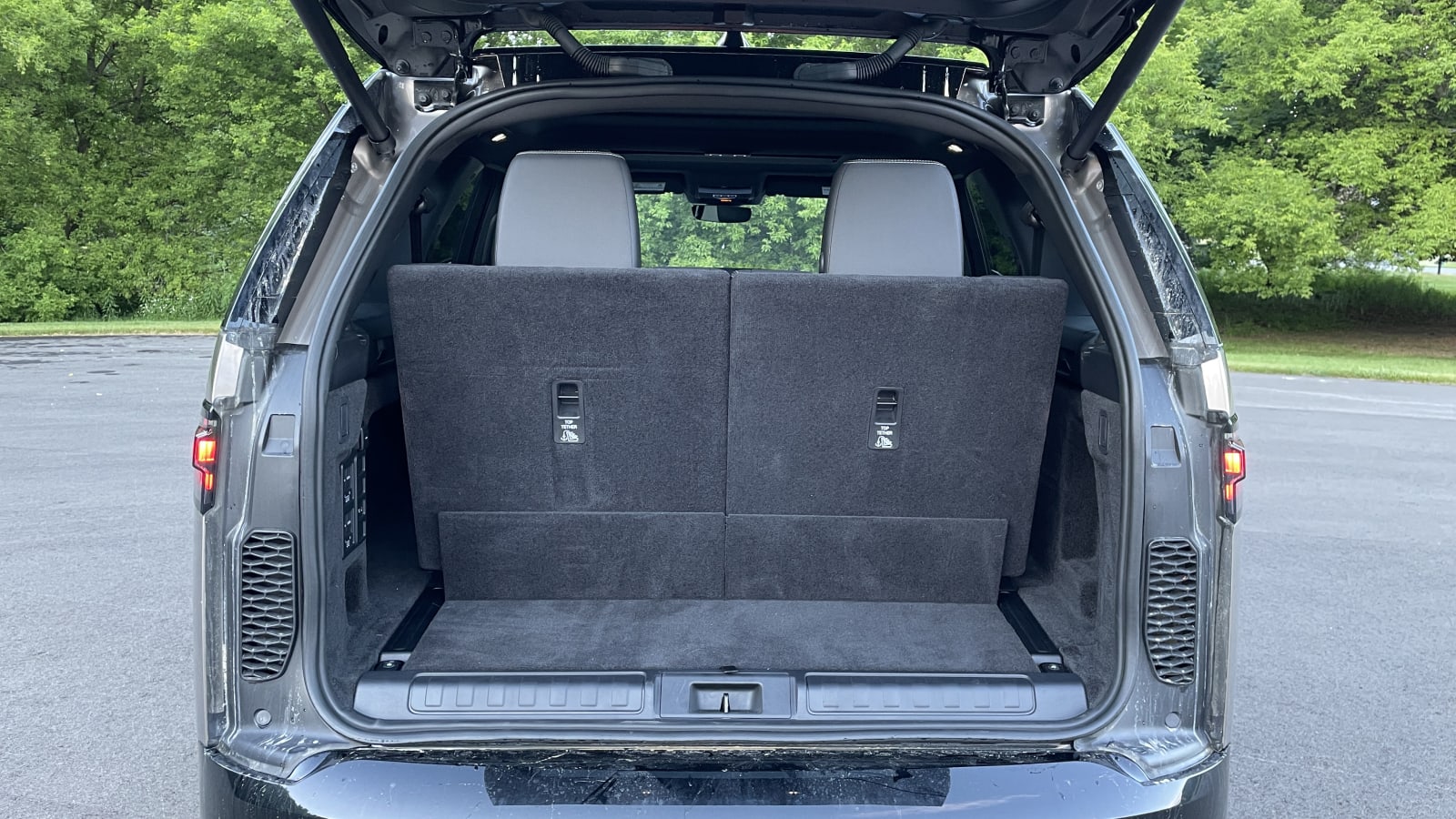 One area with less digitization is the gear lever. Land Rover ditched the rotary knob that whirred upward on start-up to a permanently fixed gear lever that you rock back and forth to select gears. Besides the tactile improvement, the new lever takes up far less space on the center console, allowing for improved storage and cupholders. Such space efficiency was the very reason JLR introduced the rotary shifter in the first place in the first Jaguar XF, yet somehow managed to forget that fact in subsequent applications like the Discovery. In other words, the shifter design may be different, but the original intent has been restored.

Rear seat passengers will notice slightly more comfortable seats with more thigh support (the fronts are already super comfy and didn’t require any changing), those repositioned air vents that disperse air better and new tablet holders on the rear seats to keep the kids occupied. Getting into the third row is awkward and requires partially stepping over the corner of the second row, and while an adult can technically fit back there, it’s far better suited to children. The enormous, square luggage compartment is nearly eliminated with the third row up, too.

All these interior improvements do make the Discovery a more attractive option in 2021, but we’re still left wondering who this vehicle is for. The styling only faintly recalls the upright and boxy Discovery and LR models before it, and the sporty additions only skew it further toward being a three-row Range Rover without the name. Sure, the Defender 110 can be had with a third row of seats, but it’s tiny, and nothing like those of the Discovery’s boxy LR4 predecessor. That SUV’s blend of off-road ruggedness and family-friendly dimensions made it unique, and given tastes these days (and the LR4’s strong resale values relative the newer Discovery), it’s hard not to question whether Land Rover is moving in the right direction.

Plus, by trying to be more like other three-row luxury SUVs such as the Lincoln Aviator and Volvo XC90, Land Rover is setting itself up for closer apple-to-apples comparisons. They probably won’t go well. Besides its ride, handling and the electrical gremlins we experienced, the Discovery’s pricing is questionable. Things start at $55,250 for the four-cylinder, which is up $1,600 versus the more powerful, supercharged V6 that was dropped this year. The inline-six begins at $63,250, while the top-of-the-line HSE R-Dynamic trim with this engine brings you to $70,250. At that price point, we’re sniffing around a nicely equipped Aviator Grand Touring (the plug-in hybrid) or Volvo XC90 Recharge (also a PHEV). These other three-row luxury SUVs will ultimately be the superior on-road companions the new Discovery wants to be. Of course, even with the new direction, it can still hit trails better than the vast majority of SUVs out there, especially when compared to the Volvo and Lincoln. So despite its identity crisis, the 2021 Discovery remains an appealing family off-roader.