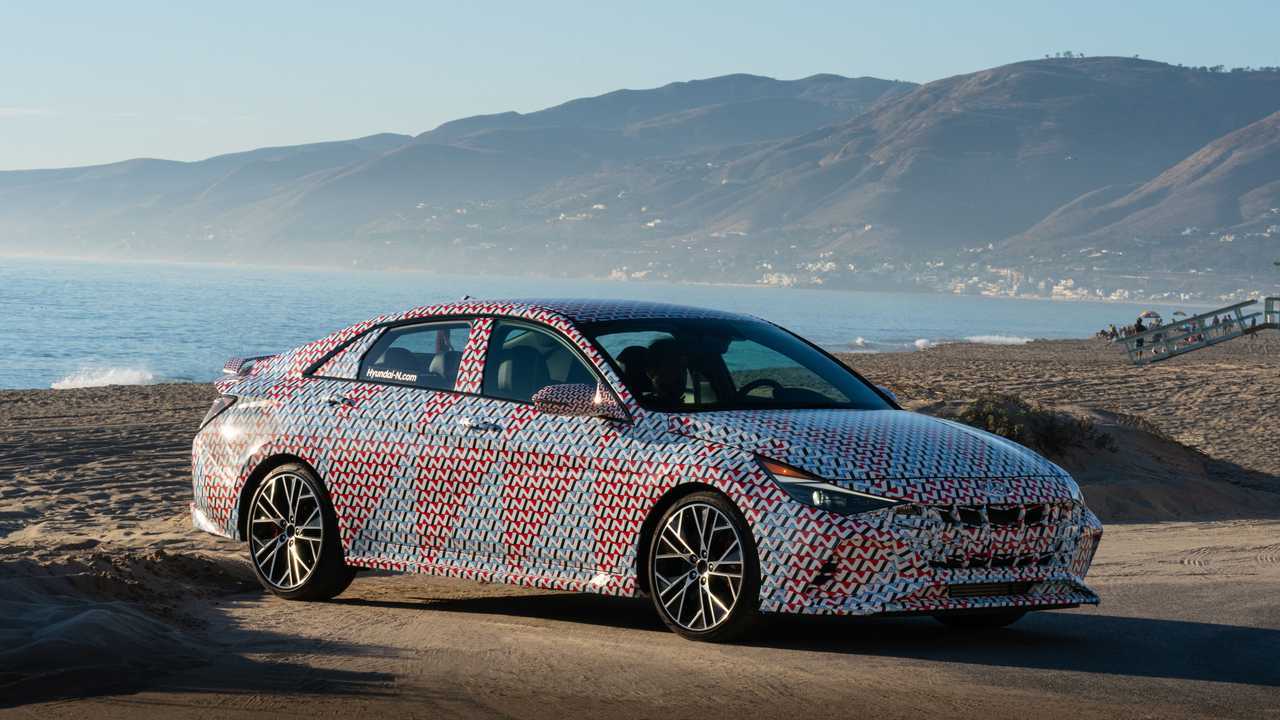 One of the most surprising new-vehicle debuts of the past year was the 2020 Hyundai Veloster N, which took the company’s funky, asymmetrical hatchback and turned it into a Honda Civic Type R–rivaling track star. Just about everyone who’s driven one loves the sportiest Hyundai currently for sale, and it’s about to get a new sibling. Enter the 2021 Hyundai Elantra N.

Borrowing liberally from the Veloster parts bin, the Elantra N makes lots of promises to the driving enthusiast, and I had high hopes when Hyundai tossed me the keys and told me to have it back in a few hours. Over a variable route that included multilane parkways, tight mountain roads, and pockmarked West Hollywood streets, the hottest Elantra variant proved itself a wonderful sport sedan, even in this example’s pre-production, extensively camouflaged form.

The Elantra N was a surprise addition to the small sedan lineup when Hyundai announced it a few months ago. Sitting at the top of the heap, the compact car packs a turbocharged 2.0-liter inline-four, producing 276 horsepower and 289 pound-feet (up 1 pony and 29 torques versus the hot Veloster). An electronically controlled limited-slip differential manages that power, sent only to the front wheels via a standard six-speed manual or available eight-speed dual-clutch transmission – gearboxes that please both purists and performance junkies.

The performance recipe also calls for an N-specific multi-link suspension design, which replaces the twist-beam rear axle found on the Elantra, Hybrid, and N Line. Keeping that new geometry in check are stiffer performance-tuned springs and adaptive dampers all around, with 13.6-inch front and 12.4-inch rear rotors stepping in when it’s time to slow for the next apex. On paper, the Elantra N appears to add all the ingredients that could turn the competent Elantra into a legitimate sport sedan.

Luckily, it all holds up on the open road, too. I drove a DCT-equipped prototype, and initially, the gearbox let me down somewhat. Left to its own devices and with the drive selector set to “Normal,” the transmission upshifts early, ensuring plenty of lag from an engine that only starts to wake up at about 2,200 rpm. Though clearly intended for around-town use, both Normal and Eco modes put a shock collar on the Elantra N, sapping it of any personality. However, the checkered-flag button on the steering wheel calls up N and N Custom drive modes, instantly waking the sedan from its dozing.

In these modes, the dual-clutch gearbox chooses lower gears to keep the engine in the thick of its power band – boost builds consistently from 2,500 rpm to about 6,000, making third and fourth gear the darlings of a canyon blast. Gear changes from the transmission are crisp and snappy, accompanied by a pleasant bark from the tailpipes. Speaking of, the valved exhaust sings a lovely song in Sport and N drive modes, so we wonder why Hyundai bothered with synthesized engine noise piped through the interior speakers.

Up in the mountains, the Elantra N becomes a puma on the hunt.

Up in the mountains, the Elantra N becomes a puma on the hunt. Resolutely grippy tires and a well-sorted limited-slip differential claw at the pavement, the rear end dutifully following the front with balanced handling behavior. At the limit, the front axle gives way to mild understeer, but hitting that traction ceiling would be the work of a lunatic on public roads. For example, when a snaking section of road surprised me with a blind hairpin turn that I should have been more prepared for, the Elantra took my added steering input and converted it to marvelous, drama-free roadholding.

For all its aggression in such scenarios, the puma turns into a pussycat when it’s time to cruise with traffic. The stiff springs and adaptive dampers yield some harshness on bad roads, even in their most comfortable setting, but otherwise, the Elantra N is a comfortable place to spend time on a commute. Some credit goes to the smooth transmission that creeps through gridlock like a torque-converted automatic, and the aggressively bolstered N-specific seats are still broad and cushy enough to feel supportive but never confining.

Like the compact sedan on which it’s based, the 2021 Elantra N is difficult to fault. One concern lies in material quality that’s worryingly similar to that of the Elantra Limited, meaning hard, shiny plastics on the passenger grab handle, dash top, and door panels. For an estimated $33,000 (official pricing isn’t available yet), it’s difficult to excuse such materials in a performance car. Hopefully, Hyundai will wrap some of those surfaces in soft-touch plastic, imitation leather, or genuine hides, giving the Elantra N a more upmarket appearance and feel.

Apart from that issue – which might be of little consequence to budget-minded auto enthusiasts anyway – the 2021 Hyundai Elantra N is pretty wonderful. Responsive, capable, powerful, and fun to drive, the Veloster’s four-door sibling is destined to find plenty of fans.