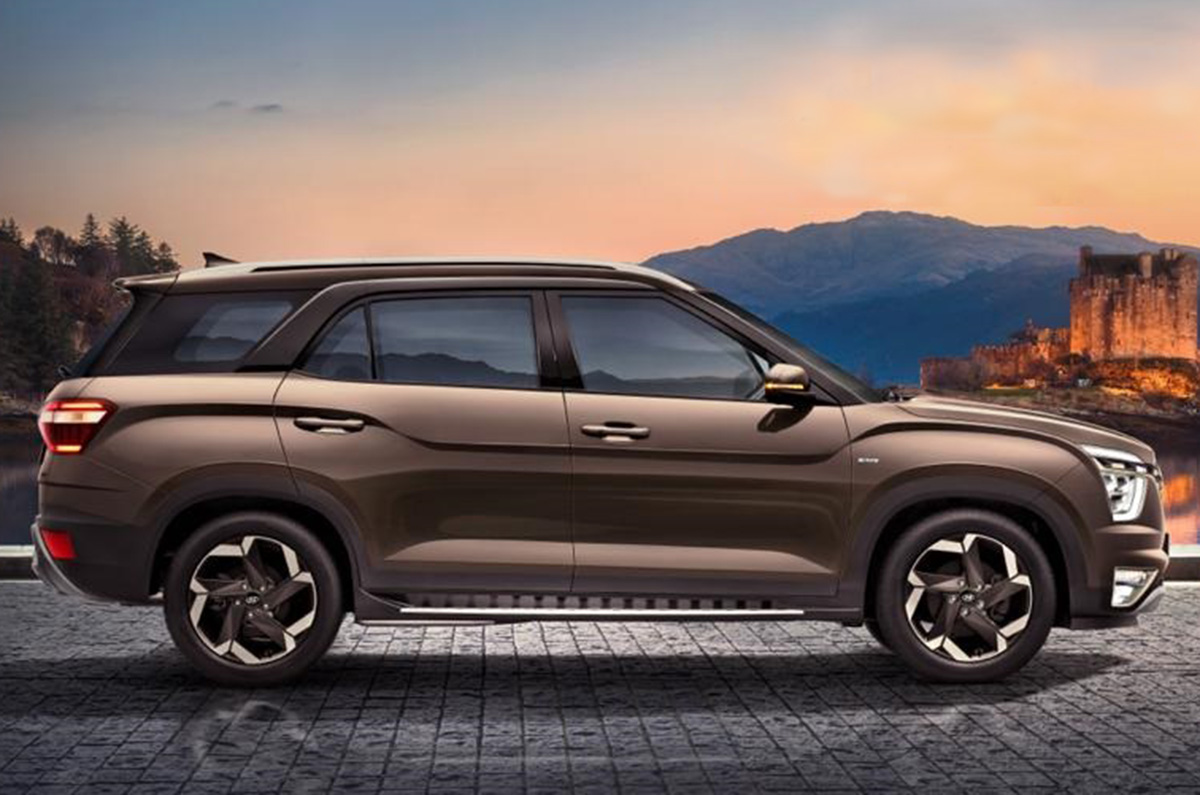 The Hyundai Alcazar has been revealed in its production-ready guise, ahead of its launch in our market in the coming weeks. While the new three-row SUV is based on the same platform as the  Creta, there are a number of differences between the two models.

While the new Alcazar shares its platform with the Creta mid-size SUV, Hyundai has worked on it to give it a longer wheelbase – 2,760mm to be precise (150mm more than the Creta). This has been done in order to open up more room for the second-row passengers as well as to accommodate the extra row of seats. Hyundai has also equipped it with a longer rear overhang to aid the latter.

In terms of design, the production-spec Alcazar quite evidently shares a number of key elements with the Creta, along with some body panels like the front fenders, bonnet and even all four doors.

However, there are a variety of design elements that help distinguish the Alcazar, such as a tweaked grille with a diamond-studded pattern, slightly updated front bumper design, a new alloy wheel design, and a prominent rear quarter glass. The rear of the SUV features all-new styling as the Alcazar gets new wraparound taillights that extend on the slightly more upright tailgate, faux dual exhaust tips and a faux brushed aluminium skid plate.

The main talking point on the interior is the added row of seats. The Alcazar will be available with both a 6- seat (with captain’s seats in the second row) and 7-seat (with bench seating in the second row) configurations. In both configurations the second-row seats feature a one-touch tumble mechanism to give access to the rear seats as well as a sliding function to either free up more space for the second or third row passengers. Speaking of the third row, the seats get a reclining function and they also fold down completely flat to provide better boot space.

The interior also gets a dual-tone colour scheme and the captain’s seats version gets a unique floor-mounted central armrest with cupholders and extra storage space.

Under the hood, the Alcazar will be available with both petrol and diesel engine options. The petrol unit in question is an updated version of the 2.0-litre, four-cylinder engine in the Elantra and Tucson, that now produces 159hp and 192Nm (7hp more than Elantra and Tucson). The diesel engine on the other hand, is the same 1.5-litre, four-cylinder turbocharged unit from the Creta that produces 115hp and 250Nm.

Both engines are available with either a 6-speed manual or a 6-speed automatic gearbox.

Once launched, the Hyundai Alcazar will take on the likes of the MG Hector Plus, Tata Safari and the Mahindra XUV500. Though, the competition in the segment will only get hotter with the arrival of the next-gen XUV500 later this year.

Hyundai i20 N Line spied ahead of launch