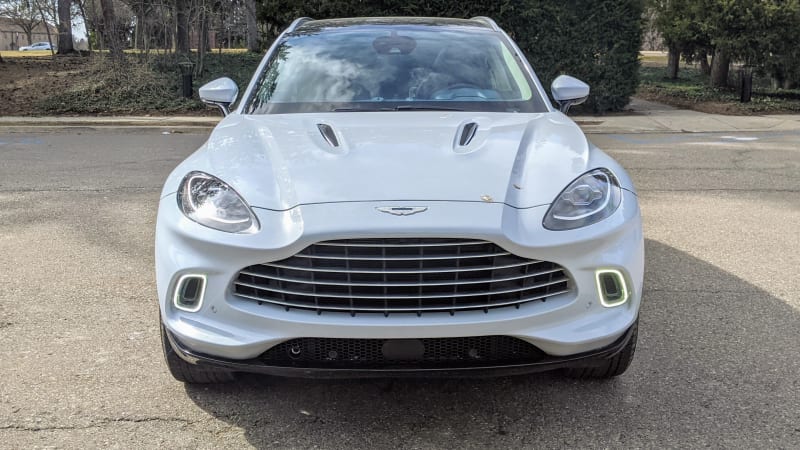 Many times we test high-powered crossovers but view them through the same lens as their performance-oriented siblings. Is this a Mustang? Is this a Porsche? Is it worthy? The list of crossovers subjected to navel-gazing and hand-wringing is long. Rather than fretting over the badge or the shape, it’s helpful to simply judge these vehicles on their merits. After all, the 2021 Aston Martin DBX was created because crossovers are essential, not because Aston ran out of sports-car ideas.

The DBX is the first and assuredly not the last crossover in Aston Martin’s 108-year history that’s filled with glittering sports cars and financial unease. The latter is the reason the DBX exists, so as to allow for the former to continue to endure. Put another way: It’s 2021. Ya gotta have a crossover, and it needs to be able to do stuff.

The last time I reviewed an Aston, the DB11, I piloted it through the sun-drenched Tuscan countryside at high speeds. Five years later I find myself measuring another Aston under vastly different circumstances on vastly different merits. That’s actually perfect.

The DBX is a crossover that can run, but my first order of business is strapping my son’s rear-facing car seat in the back. It fits pretty well, and even with him right behind the driver’s seat, I still had a decent amount of room. Despite the dramatic roofline, I was able to get him in and out of the DBX with reasonable comfort. A minivan with sliding doors and a low ride height is easier, but the Aston is about as fit for toddler duty as any coupe-styled crossover can be. My son’s reaction? He loved the blue leather with its white stitching and noted the car “yelled.” That’s what an AMG-built turbo V8 sounds like, son.

The DBX’s cabin is worth our test car’s nearly $211,000 sticker. It’s interesting and stylish, rather than decadent. The all-Aurora blue leather looks and feels expensive. The sea of blue is broken up by a camel-colored Alcantara headliner, the ivory seatbelts and a light olive aspen overlay that accents the center console. The contrasting white stitching is subtle but intricate on the seats and door panels, and the seatbacks and large steering wheel proudly display the Aston badge. There’s no shifter, but the paddles are large and easy to use, returning a satisfying clack. To select park, drive, neutral or reverse, there’s buttons set across the top of the dash, which opens up the console and ties the DBX aesthetically to the cabins of most 21st century Aston Martins. So too does the glass start-stop button centered right in the middle of the dash.

Aesthetically, the DBX is perhaps the best example of a brand translating its sporting tradition to a crossover. Narrow your vision to the grille, hood and headlights: that’s an Aston straight out of central casting. The DBX wins points, however, for completing the look. There’s plenty of crossovers that look sporty from the A-pillar forward, but the DBX continues that vibe right through the taillights. Note the beltline that rises then falls through the rear quarter panel and the Vantage-inspired flip in the back. Aston really sticks the landing — which is not easy to do with crossover designs — finishing cleanly and with flourish. There’s also frameless doors, 22-inch gloss graphite wheels, hood blades, hockey stick-shaped contours and vents integrated into the front quarters. It’s not one thing; all of the design elements make the DBX naturally feel like an Aston. Ask Porsche if it’s easy to make a crossover that’s immediately accepted — no matter how attractive and powerful it is. 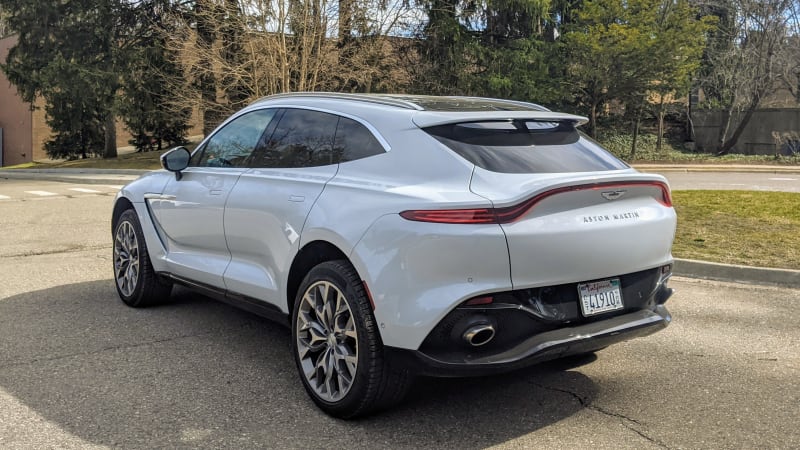 Yes, the DBX is alluring and the power plentiful. Sourced from Mercedes-AMG, the 4.0-liter twin-turbo V8 is rated at 542 horsepower and 516 pound-feet of torque. It hits 60 mph in 4.3 seconds and feels every bit that quick. The nine-speed automatic transmission shifts quickly when needed, and also will hold second and third gear almost surprisingly long during aggressive acceleration. The tuning reinforces the feel of a sports car, and don’t forget that this V8 is used in the DB11 and Vantage. There are several driving modes. I spent a lot of time in “GT,” which is a reasonable blend of comfort and capability, though dialing up “Sport” on the expressway was logical and deepened the tenor of the exhaust note. I used “Sport+” and “Terrain” sparingly, as there wasn’t much call for them. Unlike my DB11 drive, I didn’t push the limits of the DBX often. I ran errands, picked up groceries (eight bags fit in the rear), grabbed take out and used it like a crossover. Dogs show up in plenty of the DBX’s marketing materials, but I resisted the urge to put my golden retriever in back, though Aston offers an optional pet pack complete with a leash and bowls.

The DBX is a midsize crossover that handles well. The brakes are direct and return quick stopping, while the steering is light yet direct. It feels like a sporty crossover built by Aston Martin, in Wales, as the kickplates read.

My tester started at $179,986 and with multiple options, including the Elegance and Indulgence packs, came in at $210,986. There’s no point in debating value or obsessing over which options are actually worth it. You either have the money to buy an Aston Martin or you don’t, and if you do, you’ll probably get a few options. That said, there are practical implications at play. The DBX does live up to its mission as an authentic Aston Martin and a usable crossover. But, a reasonable person of means could logically conclude that a similarly sized BMW or Mercedes crossover at one third of this price will do the family hauling just as well, and then still park a DB11 or Vantage in the driveway alongside it. Or get a G-Class, Range Rover or absolutely loaded Cadillac Escalade, and then you’re getting an actual sport utility vehicle to complement your Bond car.

It’s a lot to think about and this is not a unique argument to Aston Martin. The Lamborghini Urus and Bentley Bentayga face similar challenges; as will Ferrari’s upcoming SUV. In the end, Aston had to get on ‘the menu’’ so to speak for purveyors of luxury who desire the brand but don’t want or need a sports car. That’s the brilliance of the DBX. Buyers can look at it with no knowledge of Aston’s history and decide the DBX is what they want, rather than a sports car they are ill-equipped to operate. They want the badge and they need to haul the kids and golden retriever. They’re willing to pay for it. What they get in return is authentic. It’s an Aston Martin and a crossover, elegantly fulfilling its duties as both require.