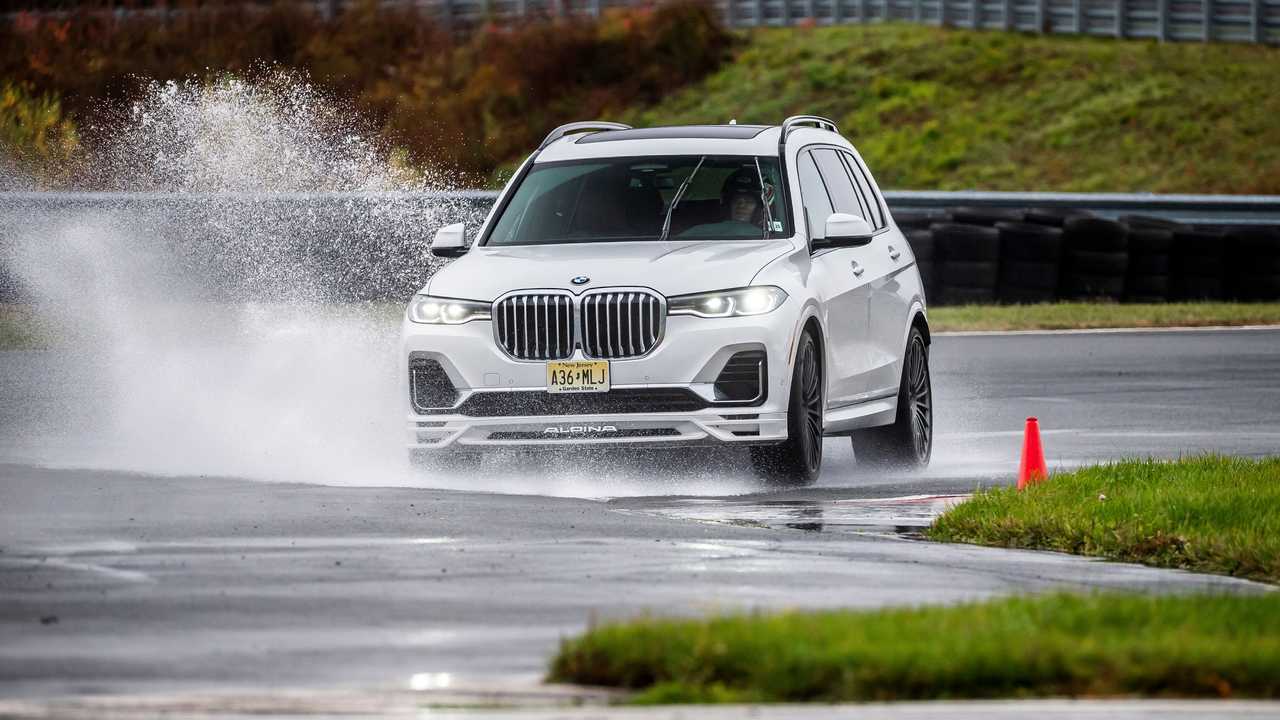 You expect to see certain vehicles in pit lanes – sleek, low, sporty shapes on sticky tires, with intense aerodynamics and stripped-down cabins, right? Sure, on an amateur open track day, you might see some sedans and convertibles, but you will not see 5,900-pound, three-row luxury SUVs. And yet, BMW lined up three new Alpina XB7 SUVs in the pits at the Monticello Motor Club and told us to have at it. That’s just what we did.

For about three laps.

After ramping up in the wet and cold conditions, our XB7 lost its cool, throwing a warning about high transmission temperatures that brought us into the pits. All of this is to say that while you can track an XB7, this SUV is much happier – and more impressive – on public roads, where its effortless straight-line acceleration, sublime ride, and uncommon rarity rise to a level even the standard X7 can’t approach.

Admittedly, it’s hard to understand why anyone would buy an XB7 over the X7 M50i. There’s nearly $42,000 – about the cost of a base X3 – between the two. But if you love the idea of an X7 M, the XB7 is it for now, slashing half a second off the M50i’s 4.5-second sprint to 60. Alpina boosts the twin-turbocharged 4.4-liter V8 from 523 horsepower and 553 pound-feet of torque to 612 hp and 590 lb-ft using larger twin-scroll turbochargers, new intercoolers, and a revised exhaust. Alpina also added a larger transmission oil cooler, although it probably could have been bigger based on our track experience.

The result of these changes is that the M50i’s thunderous acceleration is even more startling. Despite a 5,900-pound curb weight, the XB7 surges ahead from a standstill on a relentless wave of turbocharged torque. The two fat turbochargers make their presence known via constant hissing from under the hood – despite the larger units, though, there’s little turbo lag while rolling off the line. Alpina’s distinct exhaust setup is throatier and more bassy, enhancing the 4.4-liter’s naturally ear-pleasing note. Overall, and based purely on powertrain improvements, the XB7 makes a strong case for itself.

Alpina worked alongside ZF to tweak the software on the standard X7’s eight-speed automatic and attach its odd Switch-Tronic interface. Buttons take the place of wheel-mounted paddle shifters, which makes manual mode more difficult in dynamic situations. Overall shift speed feels as quick as a non-Alpina 8HP gearbox, but we didn’t break out a stopwatch. Beyond the engine and transmission, Alpina also modified the rear limited-slip differential and swapped out the driveshaft and prop shafts.

Changes to the chassis appear minor looking at the new parts, but there are some substantial changes. Along with Alpina-spec software for the air suspension, integral active steering, four-wheel steering, and active anti-roll bars (each of those items is an option on the X7 – they’re standard here), the XB7 offers a wider range of ride heights for the driver.

While you can only lower a normal X7 by about three-quarters of an inch with Sport or Sport Plus, the XB7 drops 1.5 inches in Sport Plus – that’s equivalent to the normal model’s loading level. And if you want to go into the boonies, the Alpina’s lone off-road mode increases ride height by a full 1.5 inches (the standard X7 has two off-road heights, starting at three-quarters of an inch in Off-Road 1 and extending to 1.5 inches in Off-Road 2).

Comfort remains the default and best setting for cruising, so even the optional 23-inch wheels do little to ruin the smooth ride. Sport and Sport Plus liven up the handling character, with stiffer dampers and a sharper steering response, but this is still a huge three-row SUV and not even Alpina’s fettling hides that. What’s surprising is that the XB7 doesn’t feel as tossable and immediate in its responses as the Mercedes-AMG GLS 63, a chief rival, despite a similar level of active suspension tech. In terms of confidence, there’s just less with this Alpina-badged BMW.

What you buy an XB7 for, aside from the M-like straight-line performance, is the rarity of the Alpina badge and the style the German company brings to already-flashy BMW vehicles. Alpina only builds about 2,000 vehicles per year, most of which end up in Europe – in North America, the XB7 joins the 7 Series–based B7 as a particularly uncommon vehicle, and both measure their annual sales in the low three-digit range on our shores.

Fortunately, the Alpina stands out in a way that borders on tasteful. Yes, the 23-inch wheels are brash, but they’re a more subdued take than the 23-inch monoblocks you’ll find on the GLS 63. At the same time, the multispoke design has nearly as established a history, appearing on numerous Alpina-badged products over the years. The new front clip, with its prominent “ALPINA” lettering on the chin and oversized intakes, presents a more assertive face to the world, while the new rear bumper sports wee little diffuser fins. Alpina says these touches are wind-tunnel approved and improve high-speed stability and cooling.

Save Thousands On A New BMW X7

For us, the XB7’s cabin makes it most worth considering, even beyond the added power. Alpina’s touches start at the front seats, which now pack every comfort touch from the BMW catalog – heating, cooling, and massaging – while Merino leather is standard on the chairs and optional on the dash.

The devil is in the details, though, with Alpina adopting “Crafted Clarity” glass accents on the iDrive dial and blue illumination for the crystal shifter. We adore the Alpina Walnut Nature Black trim – we didn’t even realize it was wood at first because of the depth – and the brashness of the Alpina badging on the cupholder cover, while the revised steering wheel sports Alpina-spec Lavalina leather and flashy blue and green stitching. We’re less certain on the gauges, where the green accents clash with the blue and give the 12.3-inch digital gauges a ghoulish look.

Who Cares About Money?

That’s still a good bit less than some more common two-row competitors, such as the Bentley Bentayga (about $160,000), although the Alpina’s chief competitor, the $132,100 GLS 63 is a tempting offer. Equally tempting, in terms of outright opulence, is the upcoming Mercedes-Maybach GLS 600 ($161,550). Both the Maybach and the Bentayga offer a substantially different character, though, with the Alpina walking the line of outright luxury and enthusiastic performance.

But more than that, it’s the rarity that keeps us coming back to the Alpina. While a Bentayga or a hotted-up GLS are rare, the XB7 is on a different level – you could spend a year looking for it in a major city and never spot one. And when it comes to ultra-luxury, scarcity often outweighs actual cachet. If you can find an XB7, pick it up quickly because another isn’t likely to come along. Just save it for your favorite boulevard, not your favorite racetrack.