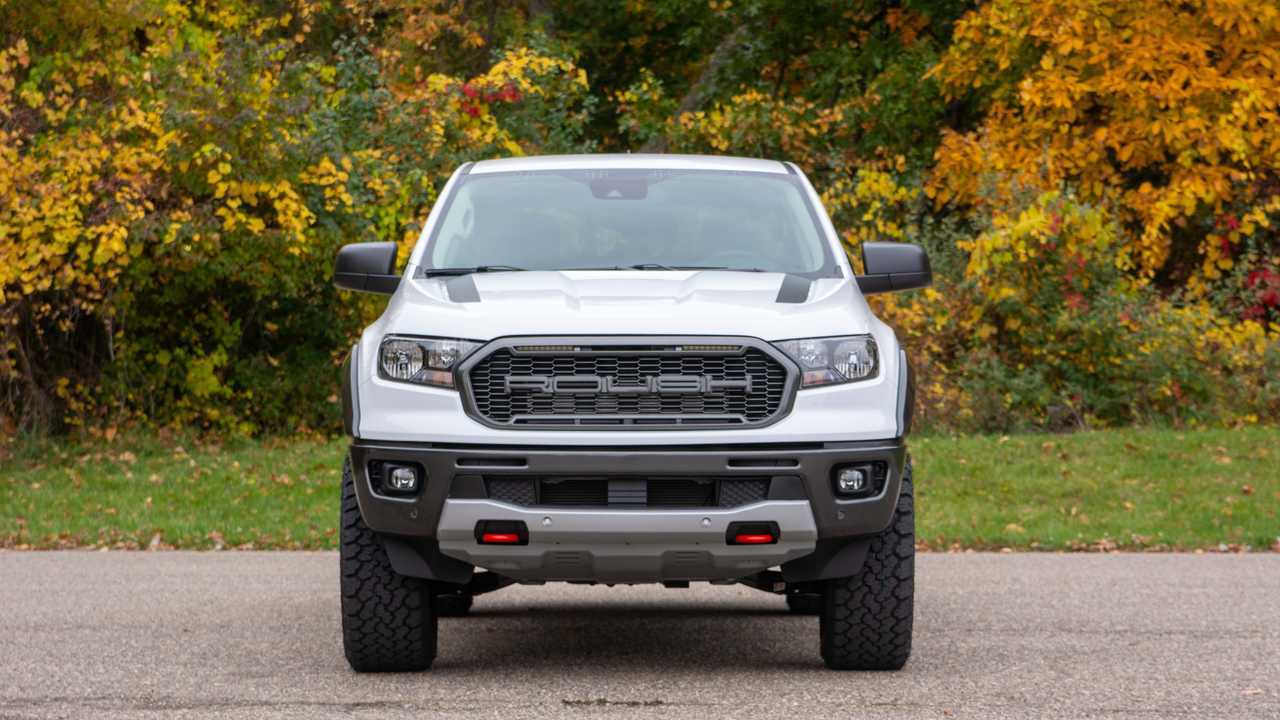 Let me start by saying I was excited to drive the Roush-tuned Ford Ranger. The Blue Oval’s small pickup truck is a competent thing, but with Ford ruling out a Ranger Raptor on our shores, it seemed destined to remain an odd man out relative to the higher-grade Toyota Tacoma TRD Pro and Chevrolet Colorado ZR2.

Then Roush came along with the truck you see here. Simply named the Roush Ranger, it addresses some of the standard truck’s critical issues. But after a day behind the wheel, it feels like that’s all the aftermarket tuner really did – Roush didn’t expand or dramatically improve the Ranger beyond its basic shortcomings. Combine that with a hefty price and the upcoming Ranger Tremor, and it’s tough to make a case for Roush’s small truck in the long run.

For more on how Motor1.com rates cars, click here.

The most substantial changes, thankfully, happen on the truck’s underside. A new Roush-tuned suspension with Fox shocks lifts the front of the truck up to 2.0 inches, but leaves the rear ride height alone. It’s more a leveling kit than a traditional lift, but the subtle change leaves the Ranger with a more attractive, sporting stance.

Helping with that mission are standard 32-inch General Grabber ATX All-Terrain tires and flashy 18-inch wheels. The truck also sports a cat-back exhaust. And while this tester retains its stock turbocharged 2.3-liter four-cylinder engine, good for 270 horsepower and 310 pound-feet of torque, an available Performance Pack from Roush adds 47 horsepower and 65 pound-feet of torque while elevating the price by $935.

Had this truck carried that package, the as-tested price would be just shy of $59,000. That’s $12,000 more than a Toyota Tacoma TRD Pro, $5,300 more than a Chevy Colorado ZR2 Bison, and $3,000 more than the Ranger Lariat with Ford’s own more complete, power-boosting Performance Pack Level 3, which I tested a month after my stint in the Roush.

The Good And The Bad

For better or worse, the Roush Ranger feels more like a small truck with some knobby tires than a real rival to the off-road-focused factory pickups mentioned above. A ZR2 Bison or TRD Taco make compromises on the road to improve capability in the dirt, and that fact permeates the driving experience of those trucks. On the road, though, the Roush barely modifies the standard Ranger’s character.

The ride is softer, owing to the Fox shocks, and the body moves a bit more. The most dramatic change, though, comes from the Grabber ATX tires, which produce more noise and lead to a marginal reduction in cornering ability. The steering, notably, feels unchanged from the standard Ranger despite the meatier rubber. But if you’re climbing into the modified Ford expecting a Ranger Raptor alternative, think again.

The Roush Ranger’s strongest argument, then, is an aesthetic one.

The addition of a cat-back exhaust allows the Ranger’s 2.3-liter four-cylinder to sing a little more clearly – it gives the truck more attitude, with a bassier note and more volume. It’s a nice change that I’d recommend whole-heartedly. That the exhaust pack gives the Ranger a tasteful set of chromed dual pipes doesn’t hurt either. I’m not going to harp on this truck’s broader lack of powertrain changes, although it’s a bit silly Roush demands such a hefty premium for the package and then asks more for separate engine mods. Including the Performance Pack would make the Roush Ranger’s package price much easier to swallow.

The Roush Ranger’s strongest argument, then, is an aesthetic one. While I personally don’t love the company’s treatment on the Mustang or F-150, the rather dowdy Ranger looks wonderful after a visit to Roush Performance. The level ride height, knobby tires, and upgraded wheels play well with the flared Magnetic Gray fenders, red tow hooks, and Roush-spec grille (which hides neat running lights). This is a far more purposeful-looking truck, even if it isn’t much more capable. Changes to the cabin are less successful, though, with Roush’s leather treatment not really feeling any more premium than what comes on the Ranger Lariat.

And that brings me back to the price tag. If the most a $12,000 package does for a $35,000 to $40,000 vehicle is improve its styling, there’s either a problem with the package or a problem with the price. In this case, it feels like the latter, because the overall Roush Ranger content is worthwhile – this is inarguably a more stylish, attractive truck. But when the cost exceeds more capable competition by many thousands of dollars, people will begin asking what else they get for their hard-earned money. And this Roush just doesn’t have an answer.

RAPID RTC and Reputation gear up for AM Live tomorrow

New Honda HR-V SUV to be revealed next month