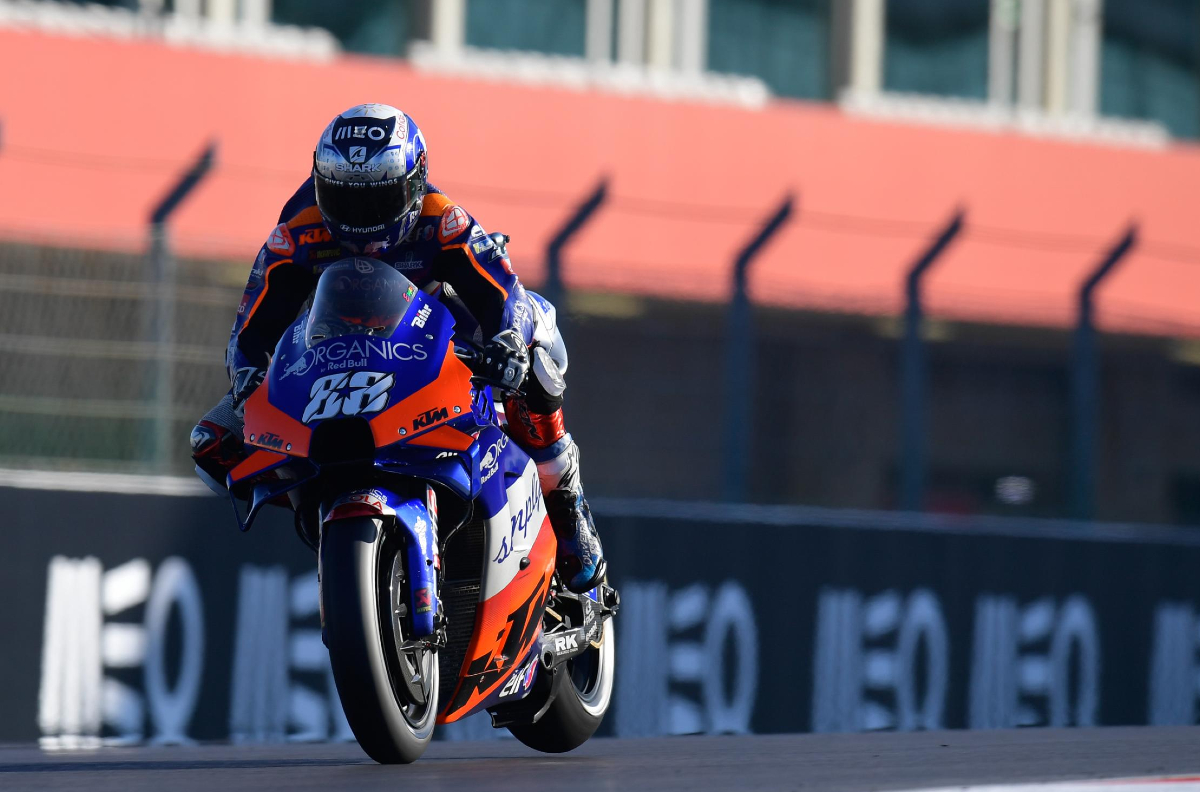 Red Bull KTM Tech 3 rider, Miguel Oliveira took a dominant victory at the 2020 Portuguese Grand Prix, to record his second win of the season. The Portuguese rider has wrapped up the 2020 MotoGP season on a high note and was understandably emotional after winning on home soil.

Miguel Oliveira started the first-ever Portuguese MotoGP race from pole position and got a good start as the lights went out. At the end of the first lap, he had already begun pulling ahead of Petronas Yamaha’s Franco Morbidelli and Pramac Ducati’s Jack Miller.

In fact, on Lap 3, Olivera was 1.5 seconds clear of the rest of the field and by Lap 7, the gap stretched to over three seconds. As the race progressed, it was clear that Oliveira was in the zone and it would take a big mistake for him to throw the win. That, however, didn’t happen as he didn’t put a wheel wrong on his KTM and rode past the chequered flag amid rapturous cheers from his elated team. In all, KTM have won three races this season.

While Oliveira cruised to his victory, unchallenged, the action was heating up behind him. Morbidelli and Miller were fighting for 2nd place during the entire race. Riding over the ceiling-high crests and daring dips of the stunning Portimao circuit, the duo was engaged in an entertaining battle that was a treat to watch.

Miller’s aggressive style and determination bore fruit on the very last lap of the race, as he made a brilliant move on Morbidelli to snatch 2nd place. The move also brought enough points for Ducati Corse to clinch the 2020 Constructors Championship title. The last time the Italian team won the title was back in 2007, and this bodes well for Miller as he moves to the Factory Ducati team in 2021. Morbidelli, however, found solace in securing 2nd place in the 2020 World Championship with three wins and two podiums.

At the start of the race, Suzuki was in contention to win the Constructors’ Championship and seal the triple crown but the team ran out of luck. Both Alex Rins and his 2020 MotoGP World Champion teammate, Joan Mir struggled during the initial part of the race. Mir, in fact, had a close call and almost crashed during the initial stages of the race. With 10 laps to go Mir retired his Suzuki due to a technical issue, signaling  the end of the Hamamatsu-based outfit’s challenge for the Triple Crown.

End of an era

The final round of the 2020 MotoGP World Championship signaled the end of Valentino Rossi’s time with the factory Yamaha team. The Number 46 hung up his famous Monster Yamaha leathers after finishing the race 12th, amid emotional goodbyes from his crew. In his 15 years with the team, Rossi has won a number of World Championships and his dream of bagging his 10th career title were hampered by Yamaha’s inability to give him a competitive machine. Rossi will be hoping for a change of fortunes as he moves to the satellite team, Petronas Yamaha SRT for 2021.

Yamaha, meanwhile, has a lot to introspect about, considering they blew a golden opportunity to win this year’s championship despite Fabio Quartararo, Maverick Vinales and Franco Morbidelli trying their best to bring home the points.

The Portuguese Grand Prix also marks the end of term for Andrea Dovizioso who bids goodbye to the Factory Ducati team. Despite being the team’s most consistent rider and almost beating Marquez to the title in 2018, Dovizioso won’t have a seat in 2021. He says he is taking a sabbatical from MotoGP for a year and is hoping that he finds a seat in 2022.